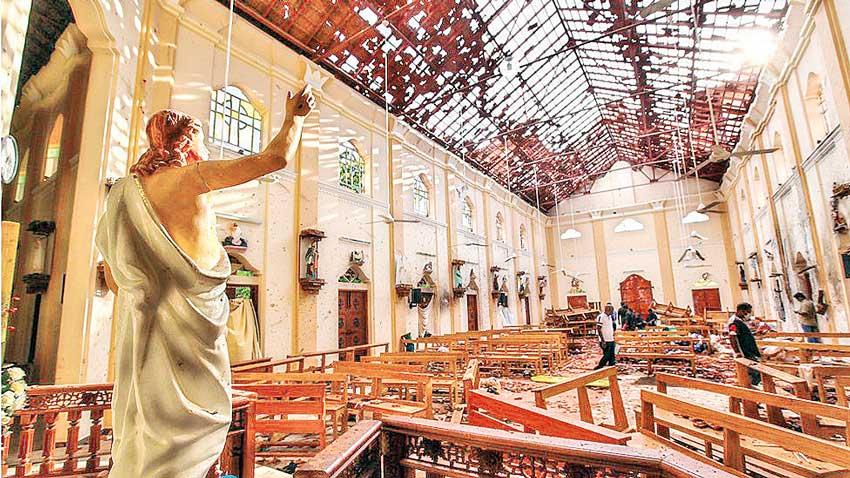 The Catholic Order was naturally very, very upset. The Cardinal, to his credit, did his utmost to calm his flock and prevent retaliatory violence. The Cardinal and others of the faith, very correctly, called for truth and justice

Here is a sequence of events that makes for interesting commentary: a) Rev. Father Cyril Gamini makes a public statement regarding the Easter Sunday Attacks where he points an accusing finger at the Director, State Intelligence Service (SIS), b) the Director lodges a complaint with the Criminal Investigation Department (CID), c) the CID summons Fr. Gamini, d) Fr. Gamini requests a week to prepare himself for any possible questioning, e) Secretary, Samagi Jana Balavegaya (SJB) and former Minister of Public Administration and Management and Law and Order (during the time of Sirisena-Wickremesinghe government) Ranjith Maddumabandara issues a statement claiming that the Director and/or the CID was attempting to ‘shoot the messenger,’ that it was an attempt to stymie interventions of the Catholic Church related to the said attacks, that the victims were being tainted as suspects etc., f) Fr. Gamini files a Fundamental Rights application seeking a Supreme Court order to prevent imminent arrest.

Yes, there was a before and perhaps an ideal after, and these are parts of the story. First the ‘before.’ Perhaps one should say ‘the “long” before.’ The attacks were carried out by the National Thawheed Jammath (NTJ), an extremist Islamic outfit led by Zahran Hashim. The leader, the followers, the bucks and arms didn’t fall from the sky.

They had all that. They were well trained. The ‘opératio was well-coordinated and execution almost immaculate. So there was a ‘long before’ to it. Part of it was ‘warnings.’ Today we know that those in the highest echelons of power were in the know. Maybe they didn’t heed warnings, but they knew. Those responsible for maintaining law and order knew. Maddumabandara, considering his portfolio, had been duly informed about the activities of Zahran and the NTJ by the then Director of the SIS who strongly recommended that a special unit of the Police be deployed to arrest him. This was way back in 2018 (May 19 to be exact). Maddumabandara did nothing. Did someone saw ‘crime of omission’? Did someone else exclaim, ‘complicit!’?

A year later bombs exploded. Those who on account of incompetence and/or criminal negligence paved the way for the attacks were lost in ‘mumblement,’ navel-gazing and thumb-twiddling. The Catholic Church was the principal target. The majority of victims were Catholics. The Catholic Order was naturally very, very upset. The Cardinal, to his credit, did his utmost to calm his flock and prevent retaliatory violence. The Cardinal and others of the faith, very correctly, called for truth and justice. Of course the then opposition played the issue to the max, as oppositions are to do. The political landscape changed but it would be silly to put it all down to the Easter Sunday attacks or the ‘role of the Catholic Church.’

Investigations were launched. Many were arrested. Some were enlarged on bail and some were released, perhaps for lack of evidence to warrant prosecution. Indictments were served. The process moves, perhaps not as fast as some would like, but no one can say ‘nothing’s being done.’

Let’s assume, however, that there’s some devious plan to ensure that justice will not be done. Let’s even assume that the Director, SIS, is in fact the so-called ‘Mahamolakaru (‘the masterminds’)’ alluded to in the preferred narrative spouted by the current opposition and certain Catholic priests. Since Maddumabandara in his missive on behalf of the SJB talks of proper procedure (claiming that the Director, SIS, should have lodged his protest elsewhere), shouldn’t’the proper course of action been for Fr. Gamini to make the complaint to the proper authorities (re the Director) and not make public accusations? Maddumabandara knows the basic dictum ‘innocent until proven guilty.’ No guilt has been established. Accusation does not amount to guilt and suspicion and suspects need to be played out through proper procedures.

Fr. Gamini’s concerns about truth and justice are well taken. He, like any Catholic or indeed any Sri Lankan, has every reason to feel aggrieved. We all want truth and justice, sooner rather than later. We can insist, but we cannot hurry the judicial process. Grief notwithstanding it is wrong to accuse without substantiation, it is wrong to assume that accusation implies guilt, it is wrong to assassinate characters. Being a priest of whatever denomination is not a cover hidden behind which one can shoot at anyone one believes is a wrongdoer. That’s a matter for other authorities. However, if someone, priest or otherwise, deems that he/she has that right, then the intended victim of such attacks has every right to seek redress from relevant authorities.

What takes the cake, however, is Maddumabandara’s sudden grief about the Easter Sunday attacks. The icing is his (and the SJB’s) ‘high-minded’ umbrage at perceived targeting of Fr. Gamini (talk about victims being labeled as culprits!) ignoring the established fact that the good father was out of order. So it’s about forgetting the back story. Is it about a political group in beleaguered circumstances imagining a better ‘later’ and trying to fish in waters they themselves ‘troubled’?

Mahamolakaru. That word. We don’t know if there was such an individual or, say, an organisation apart from Zahran and the NTJ. We can offer half a dozen conspiracy theories of course and blame it all on global politics, international political economy, religious-opiates or Original Sin. Not helpful.

This much is certain. There are lots of kuda-molakarus in the picture. No. ‘Small brained’ would be the direct translation. ‘Small-minded’ could
also work.