Yaka is a Scream! 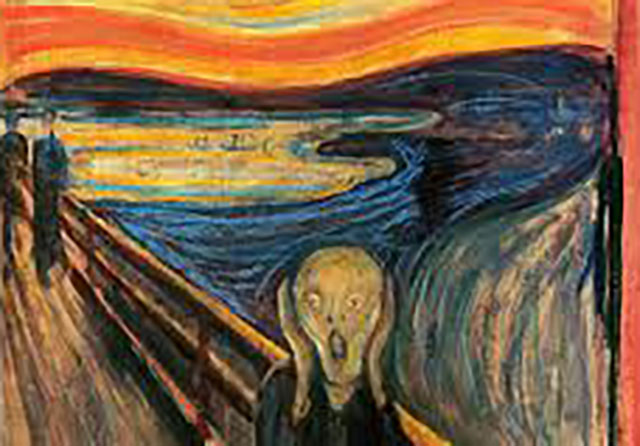 London’s art pushers once auctioned The Scream, sucking new millions off Edvard Munch’s icon of agony painted at the turn to the 20th century. A salivating Sotheby’s called The Scream: the “defining image of modernity,” transcending “art history” to reach “a global consciousness.”

The Scream would be: if the screamer is seeing what Europe and their settler satellites keep doing to the world! Instead, it’s probably the face of that repressed Norwegian, fleeing his framed grave, as art’s bankers pursue.

The art of hype boomed after art purchases were made a tax break for the capitalists in 1950s USA and then England, siphoning public billions into private coffers, much like the advertising aka public relations industry:  it’s ‘brought to you’ by you!

Throughout the 20th century, the US government actively promoted ‘abstract art’ across the world, which now flowers in the banal diversion that corporate ‘art’ has become. The art of replacing capitalism, demolishing its imperialist designs, is not to be even imagined!

Turning the crosshairs of paint brushes around to target their Indo-Pacific aircraft carriers and satellites, the torture chambers of their forts and the bloody entrails of their boardrooms, banks and stock exchanges – is not just off ‘off-Broadway’ but off-canvas, off-screen, off-page and off-stage!

No wonder the cultural attaches of the waterboarding yankees, ‘paki’-bashing bobbies, African-mugging legionnaires and Slav-slapping Prussians of NATO, are busy promoting annual literary and biennial art fests in Lanka!

Even English banks like Standard Chartered, major investors in apartheid in Africa, ‘sponsor’ art and literary awards, etc. This week, a news leak exposed the role of the British Council in using their English language programs to identify and train ‘dissidents’ in Russia.

The German word for art is ‘techno.’ Is this the art the Germans fund here? Would they share manufacture of their celebrated technology, or must we only keep buying their goods? And if we refuse to keep buying their real techno, and persist in import controls, would the Germany of Goethe and Goebbels invade us,

Last April, Germany’s feminist war minister announced the largest deployment of the Bundeswehr (armed forces) at home in post-war German history. Their grand coalition of the Christian Democrats and Social Democrats have expanded numerous war missions in Africa and Asia.

So is this what these artistique fests wish to paper over?

“In the recent history of Africa, the itinerary of the Francophone community shows us how behind the seductive image of an apparently inoffensive and even generous cultural instrument, French troops and mercenaries embark.” So said independent Mozambique’s first President, Samora Machel, later assassinated by Euro-US forces.

And what do such funded festivals mean by ‘international?’ Do they mean only lone-ranging Europeans and their local Tontos, cruising Crusoes and their boys and girls Friday?

When did ‘international’ means white people and their off-white hangers on.

Have not enslaved Africans been identified as the real source of the white man’s arts, music and culture? Is this why only one African writer can be invited at a time to these globalized literary infestations? If a Chinese is invited, is denunciation of the Communist Party, Chairman Mao or the Cultural Revolution her only qualification?

Do these ‘arts’ keep us beholden to the white worldview, promoting the Anglosphere and Euromania?

Whence spring our ideas about Art?

Can we truly afford such ‘Art’ as framed and promoted by Europeans?

“Ooooh! No! No! No!” swoons the romantic on the internet, “Science is machines and chemicals… Art is about love, poetry, nature, etc. etc.” As if poetry needs no mathematics, pens or keyboard, or the painter, chemistry; as if machines need no designers.

The definition of art versus science is based on the wasteful English class system. This vacuous prejudice claimed that “the humanities… represented the broad culture of the ruling class, and science the skills of the technicians” who served rulers. This fake binary belongs to the past, perpetuating and justifying absurd divisions in society.

Oxford and Cambridge is not where English power and their industrial revolution came from. It is where their power was continuously degenerated.

Is art, if not irrelevant, only about criticizing the status quo, as opposed to transforming the state of affairs?  We know what you won’t stand for, but what will you lie down for? Why is the image of art and the artist that of the romantic, or nihilist or anarchist ‘screaming’, of a long-haired garreted bohemian petit-bourgeois with no alternative beyond monopoly industrial capitalism? Is not real art made by workers who construct the everyday world anew, and can decisively reorganize it?

Education, art and science teach us value. What do we think being ‘rich’ means? Can an impoverished person who’s won the lottery be called ‘rich’? The imperialist embassies patronizingly fund ‘poverty analysis’, as if they don’t know how they keep robbing us! Why not ‘wealth analysis,’ so we too can follow the path they took!?

What do our rich think being rich means? To the industrial capitalist, to work is to play and to play is to work. And not just to play with toys, but to make the toys that make toys, to make the machines that make the toy-making machines. Not just to turn people into toys, or to own the sweat of those who design and make those machines and toys.

People today are only allowed larger-than-life superstars rather than down-to-earth leaders. television wishes to produce salivating idiots with our legs and mouths wide open! We need not just prophets to tell us what’s coming next, not just scribes to tell us what’s happening, but art that extends our senses to express, observe, listen, smell, feel, touch, taste and do what needs to be done, beyond these five centuries of screams…