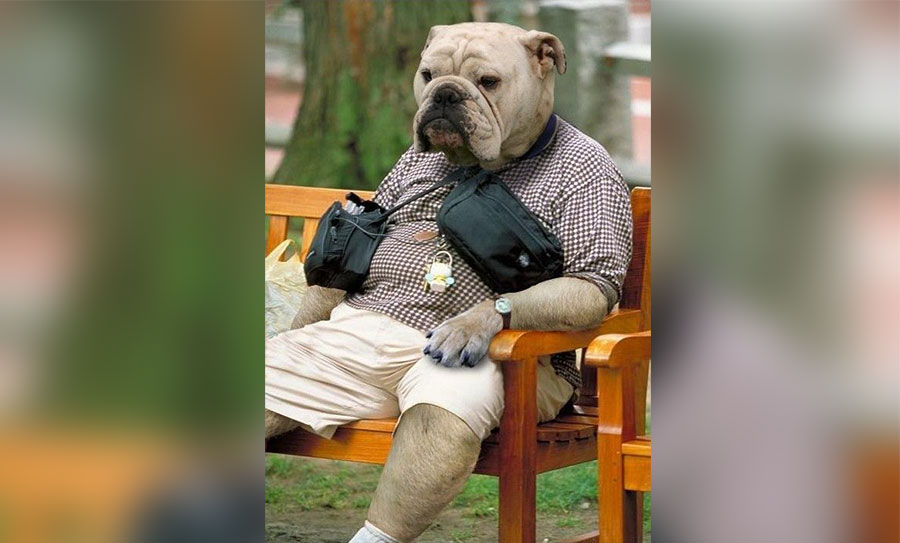 Nakano Shigeharu’s poem on 1930s Japan, The Imperial Hotel begins, “Here it’s the West: The dogs talk English…” Yet, Colombo’s canines actually understand English better than anyone. This is why many dogs have English names. Is it to express what house-trained ‘Western’-educated intellectuals overhastily misname ‘post-colonialism’?

Our neighbor’s dog Tommy is pronounced “Tawmeh!” And why not? She speaks English as she hears it at the club she’s not yet a member of. Decentred by the la-di-da of who she mistakenly regards as her husband’s betters in Colombo’s mercantile set, she got herself a personal English trainer, accredited to the “Windy Wantmore Skule of Electrokution.”

Each dawn we awaken to frustrated yelping by their too-virgin dog Tawmeh, who only bites residents. “Tawmeh! Tawmeh!”, she cries, as if aspirating the airs of an English Queen beckoning her PM to demand Parliament increase her free regal laxatives or to hurry war on Iran and China!

My neighbor only wants the penned pooch to quickly evacuate transient internals and guard the house while she and their 2.4 children are driven back and forth to acquire spurious ‘refinements’ (piano, tennis, ballet) to hasten their arrival among the already-arrived.

What their overall destination is (outside of Kanatte) few know. Her husband is largely a nocturnal bedroom denizen expending daylight at the office, and drowning evenings among other old boys at the club.

What inspires the overarching metaphor, architecture and furnishings of such alienating utterances, postures and desires?

After February 1948, with English armies still on Lanka’s soil, still loitering about our airs and seas, English mercantile firms continued to be represented in Parliament by unelected ‘Appointed’ white MPs, and by local darker ‘agents’ of multinational companies who they sponsored for political leadership. Sabotaging the growth of local industry, they deepened the economy’s subordination to the imperialism of the USA and allies.

1948 merely led “to a broadening of the sources of foreign capital,” without a reduction “in the absolute volume of investments held by the former metropolitan power,” notes SBD de Silva’s The Political Economy of Underdevelopment.  Imperialist capital acquired new interests inside Lanka, while London retained its traditional control over crucial segments of the colonial economy: plantations, mines, banking, insurance, shipping.  Having projected hegemony also over the education system, media and culture, the English felt safe that ‘responsible’ indigenous classes would not challenge imperialist interests.

After 1945, most expatriate trading firms were incorporated as private limited liability companies. This enabled the original proprietors, when retiring, “to withdraw a portion of their assets or even to sort out and separate some of their private funds which had become merged in the business.” External capital participation in the new companies was minimal, and shares were not freely transferable. The original proprietors became governing ‘directors for life,’ controlling share-ownership and all the profits!

Even after 1948, when the plantation companies “became subject to exchange control regulation,” restricting “dividends paid on current profits,” the companies began distributing “their entire disposable profits” as dividends, ending “the accumulation of reserve funds.”  They then borrowed money liberally from local banks, willing to lend at very favorable rates to whites.

Likewise in 1948, with imposition of Sterling Area exchange control: “The plantation companies were requested to remit to Sri Lanka the interest and other income from their current reserves held abroad. By transfer of these funds the government hoped to create a short-term money market. However, the companies refused to comply. In 1961 many of these companies removed these funds from any possible control by the Central Bank by shifting them to holding companies in England.”

Banks in Lanka retained colonial investment policies: local banks make most of their profits from pawnbroking!

Colonialism effected class structures: with “inordinate development of capital in the sphere of exchange” without investing in peasant agriculture. The English here fashioned one of the most impoverished rural economies in Asia.

Yet in non-settler colonies (such as Lanka), whites lived as ‘expatriates’ and invested only in trade and primary production for export markets. Productivity and per-capita income were low even in the mainly white economic sector. Underdevelopment arises from the absence of accumulation, with the country “having no class whose existence is bound up with the continuous reproduction of capital.”

Privileged castes and classes were invented to preserve the status quo. The English molded a bureaucracy and class loyal and conforming to imperial values and interests: anglomanic, rootless, insensitive to mass interests; unable to compete with the English, yet mimicking them.

The English couldn’t wholly detach the dominant indigenous class from national interests. Some, despite our pre-industrial setting, became critical, influenced partly by rationalism, democratic ideas, socialist movements. Yet when pressures of “reactive nationalism” were removed by transfer of political power, this class relaxed anti-colonial fervor and suppressed movements to uproot foreign interests.

The class of merchants, landlords and usurers, who rule Lanka as London brainwashes them, tend to mimic that expat class. As to the naming of dogs, we notice that unlike our neighbors, the truly well-appointed and even expats give their pets local names: Menika, Sudhu, Raja…  Yaka wonders whence that derives?

We previously stated it was SWRD Bandaranaike who shut down the English Royal Navy base in Trincomalee and the Royal Airforce Base Negombo station in Katunayake in 1956, and was assassinated 3 years later. In 1962, after the failed coup d’etat, the Sirimavo Bandaranaike government took over Caltex, Esso, and Shell Oil Co. assets, and expelled members of the US Peace Corps.