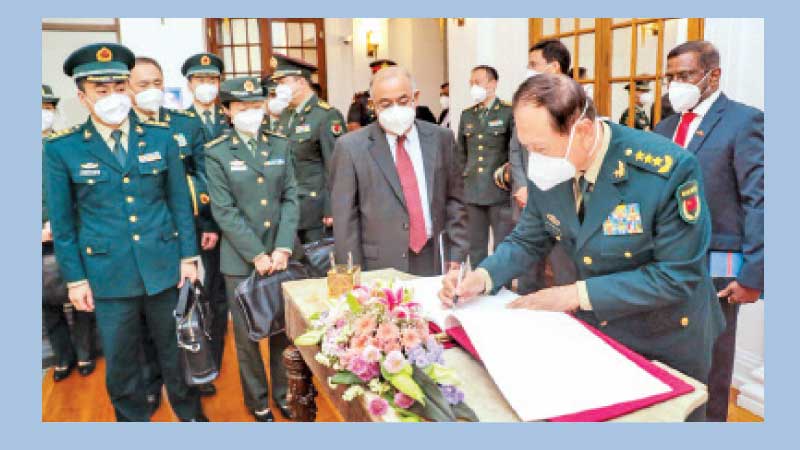 They say that our ‘China chumminess’ would jeopardize our relations with the rest of the world, and they cite the past as precedent.  Ironically, the J.R. Jayewardene Government’s cosying up to the US — ‘Yankee Dicky’ he was called — is cited as being the main factor behind the emergence of the Tigers who initially had their training in India. Even more ironically perhaps, it is even being said that when we are friends with China, it is akin to the US and the USSR backing tyrannical regimes in Latin America and Africa, etc., in the past.

Basically, the Government is being told to be geopolitically correct, lest we dominate the enemies’ list of some countries that are against our friends. It is the most basic kind of inversion of “the enemy of my enemy is my best friend” aphorism, and that apparently comes from the Arthashastra. ‘The friend of my enemy, our China critics say, will become my enemy’, and that was decidedly not in the Arthashastra.

There is a subtext to all of these objections about our China relations, that has to be read into the context of any of the recent criticisms of Sri Lanka’s relations with the Middle Kingdom.  It cannot be clearer. When we are being told that we are being geopolitically incorrect in having robust relations with China of the kind we are having now, the subtext of that objection is that notwithstanding the good economic tidings from our friendship with China, we should eschew such a beneficial friendship.

Nobody would have the brass these days to say that being close to the Chinese after all, is of questionable economic benefit. Of course, the worst critic grants that our country has much to gain from being part of China’s Belt and Road Initiative, and in being able to obtain the kind of financial assistance that is hard to come by from any other source these days. But we are told, do not touch, because this bounty comes with a curse.

So are we right then to forgo the kind of help we get from China in the hour of need as it were, because it pays to be geopolitically correct?

The facts are somewhat less than convincing with regard to this argument, but especially so in the context of Covid and the change we are seeing in the global economy. Much of that has been highlighted in this writer’s previous column in this space, but, there is more to be added.

“In the emerging world, China is certainly appearing as the power that can assist internationally, which was once the United States’ go-to role,” writes a special Advisor for Geopolitics to the French Government Michel Duclos, in his recent article, “Is Covid-19 a geopolitical game changer?”

The verdict is extremely clear. Covid-19 is indeed a geopolitical game changer, and China is coming out much better than expected relative to Western democracies in the context of the pandemic. Covid-19 confirms that borders are far more blurred in today’s competing models than they were in the once-upon-a-time “real” Cold War.

With regard to containment of Covid, “in terms of policies, Italy, Germany and France aren’t following such a different line from China, even if the implementation is obviously less deprived of individual freedoms than is the case in the People’s Republic of China”, writes Duclos. Translated, it means simply that Covid has forced Western liberal models to adopt something close to the Chinese system of governance, though not an exact replica.

Countries such as France, for instance, and Germany, have curtailed certain civil liberties in the interests of containing Covid, and therefore the liberal credentials of these nations in contrast to China, do not shine so brightly any more these days. That being the case, China cannot necessarily be conveniently painted as the ‘bad power’ which image some of our critics warn us, will rub off on us if we are seen as being too close to China.

Besides all that, China has latterly given global leadership to free markets and many other causes in the absence of the US, as the ‘go-to power’. Therefore, to underscore again what was stated in this writer’s column last week in this space, looking at our China relations through the lens of yesterday’s geopolitical calculus is an error. It is bad political science, period.

In short, though the rhetoric on the outside may still be shrill against China among the so-called liberal-democracies of the world, there is a palpable change in the way China relations are playing out by and large among countries identified with the Western bloc. New Zealand is the best example of this change in attitudes.

New Zealand, the big power in Oceania, is a study in how the geopolitics and the international realpolitik play out in this era of Covid and the transformation in the global order. The country has a female leader (Prime Minister Jacinda Ardern) who has acquired iconic status in no small part — truth be told — due to the gender dynamic that is important in today’s global reality. This is not to take anything away from her obvious abilities, and her abundant natural charisma. But Jacinda Ardern being a female leader has made her a necessary cult figure in these days in which the political capital of Black Lives Matter (BLM) and other similar social compacts, are not to be underestimated.

So Jacinda Ardern can pretty much do a bit of what she wants and not lose her star power or the recognition accorded to her on the global stage. Of course Arden has been critical of China’s Human Rights record, so called. However, Liu Zhiqin, a senior fellow of the Chongyang Institute for Financial Studies at the Renmin University of China, says there is a “fundamental difference” between Wellington’s position and attempts by certain Western countries to “interfere in Xianging.”

In other words, the consensus is that New Zealand has successfully looked for the middle ground between Western allies and China and found it. Well, somebody may turn around and say, that is exactly what we are not doing vis-a-vis our relations with China.

But that is not the point. New Zealand looking for the middle ground is a sign that in the post-Covid order, the favourite leaders of the Western world are turning away from the orthodox Western line on China, because they know it is an imperative in today’s changed global order.

New Zealand for instance removed the word ‘genocide’ from its condemnation of China’s alleged human rights violations, and that was seen as a move to prevent jeopardizing relations.

He Weiwen, a senior fellow at Beijing’s Centre for China and Globalisation think tank, noted that New Zealand has no desire to participate in “the confrontation of major powers.” That is the code for saying that the geopolitical dynamic has changed, and that New Zealand has recognized that there is a new world order that is here to stay.

It is the reality that our critics in Sri Lanka have failed to take due cognizance of when they say that our China relations are bound to fail us. They are being very one dimensional in their approach, and are failing to look beyond their noses.

To be sure, it is not as if New Zealand’s stance on China has gone unchallenged. Nigel Farage, the pro-Brexit champion of conservative British values said recently that “New Zealand had betrayed the English-speaking world and sold her soul to China.”

However, an analyst quipped in retort that Ardern had “better eyesight than others, and better judgement.” Notice also that it took an arch beyond-the-pale xenophobe such as Farage to take on Arden’s China policy. Other more sober analysts are loathe to criticize her on that score, and that is one more sign that our critics of Sri Lanka’s China policy are wrong and out of touch. We need not forego the benefits we accrue from our good relations with China, just because we feel we have to be geopolitically correct.