Why does US want to annex Cuba? 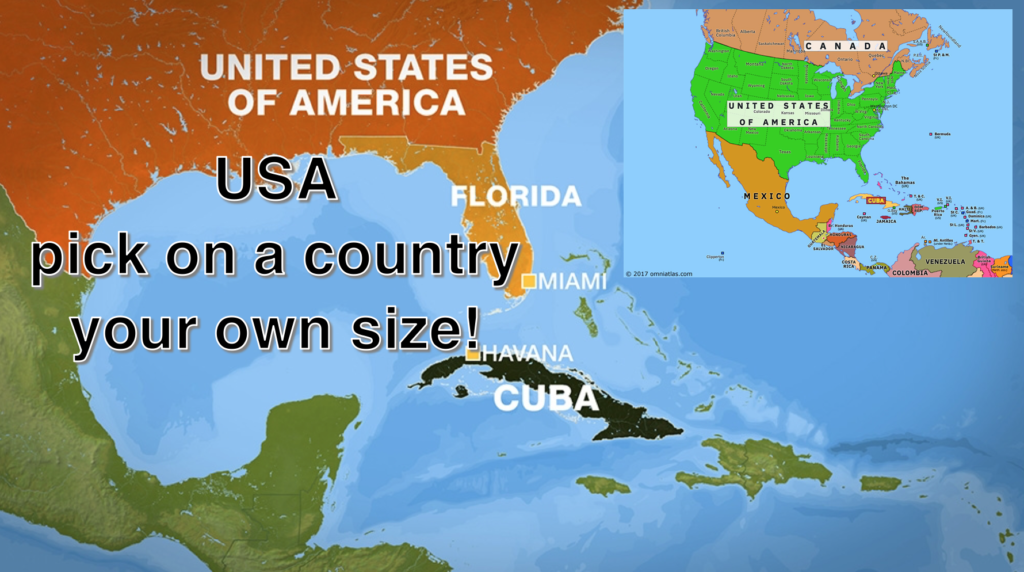 Have you ever wondered why the most powerful nation in the world with 328m people is so obsessed with Cuba a tiny island with 11million people? The quest to annex Cuba to US has been taking place since 1820. In 1840s the US offered $100 million to Spain to buy Cuba. This little island has been withholding pressures for over 200 years and Cuba & Cubans must be commended & nations facing similar threats must take inspiration from the Cuban people.

Manifest Destiny – US in Cuba

Cuba is a former Spanish colony. The British captured & temporarily occupied the capital Havana in 1762. The American Revolution was in 1776. It was the same year that Spain opened Cuba’s ports to trade with North America. It is a habit of the US to want to acquire any country that can secure profit and thus from 1820 US Presidents have been eyeing to take over Cuba. So much so the Americans despatched were even executed by the Spanish.

In 1854 the US offered $130 million to Spain to buy Cuba via a proposal known as Ostend manifesto or threatened war. By 1897 the US offered $300m to buy Cuba (119 years later in 2016 US offered $480m for MCC/Sri Lanka) The US offer was rejected & kickstarted the US-Spanish War. In 1898 the Treaty of Paris was signed with Spain renouncing rights to Cuba and US commencing its dominance in the region. Immediately following the treaty US began selling Cuban land to Americans via Cuba Real Estate Company. US military rule in Cuba ended in 1902. Yet US ensured Cuba remained committed to leasing Cuban land for US naval bases. This is how US controls Guantanamo Bay since 1898. Guantanamo Bay was leased to US in 1903 as part of Platt Amendment. Cuba claims that the lease violates Article 52 of 1969 Vienna Convention on the Law of Treaties (Coercion of a State by the threat or use of force) – can’t Sri Lanka apply same against India for the signing of Indo-Lanka Accord of 1987 under similar coercion.

The Cubans rebelled against Spain in 1868 which lasted 10 years. Beneath the scenes the US was making its own plans and as usual playing both sides! The 2ndattempt by Cuba for independence was in 1897.

In fact, the 1990 Republican Party election campaign poster in fact depicted US rule over Cuba.

Trade that began under Spanish occupation resulted in 83% Cuban exports going to US by 1877. By 1926 US companies owned 60% of Cuban sugar industry & imported 95% of total Cuban crops.

Cubans overthrew the government of G. Machado in 1933 & successor Ramon Grau immediately nullified the Platt amendment – immediately US militarily intervened sending 29 warships. The rule of Gen. Fulgencio Batista from 1940-44/1952-59 saw increase in US corporations in Cuba and Cuba became a sanctuary for organized US crimes. It was against this that an armed conflict broke out in 1953 led by Fidel Castro against the Batista government which was overthrown in 1959.

“I know Batista is considered by many as a son of a bitch… but American interests come first… at least he was our son of a bitch”.

Castro ended US influence in Cuba. Castro visited US and even held meetings with President Nixon.

If US did not like Cuba’s agrarian reforms, nationalization of industries that were owned by US companies – it should show other countries how the US political psyche works. This was how US initiated trade restrictions against Cuba. It should show countries that once anything is given to the hands of US – there is no returning it or no taking it back. Yet Castro proceeded to take over privately-owned businesses. US response was to stop buying Cuban sugar and attempts to devastate Cuban economy. These are good lessons for all countries – for short term gains, the long term repercussions of dealing with US!

US behavior soon led Cuba closer to Soviet Union. Soon the nod was given to the CIA to organize, train & fund Cuban rebels to overthrow Castro. Isn’t this how JVP & LTTE emerged in Sri Lanka? Mrs Bandaranaike’s nationalization initiatives that impacted US resulted in the birth of JVP.

The model is replicated repeatedly – any US interest compromised by a nation, they can expect ‘democracy’ in the form of insurgents trained by US & allies.

Castro held his ground & even arrested US diplomats charging them with encouraging terrorism and expelled them. US closed down its embassy in Havana in 1961 followed by an armed invasion by 1500 CIA trained Cuban exiles at the Bay of Pigs (Operation Mongoose)

How important Cuba is to US can be seen by the manner the US attempted to take over Cuba – hijackings, assassinations, terrorist attacks, sabotage & numerous psy-ops. Between 1960-1965 (5years) there had been 8 attempts to kill President Castro. This is the nation preaching human rights.

It has become customary for the US to vote against Cuba in the UNGA.

For 24years US has been voting against Cuba at UNGA. In 2016 US abstained under former President Obama.

US & allies in the UN & associate agencies began using ‘human rights’ against Cuba in addition to the sanctions and embargoes against Cuba. In 1984 a US-NGO lobbied to have Cuba’s representative removed from the UNHRC and US went on to appoint a Cuban refugee in US as US ambassador to UNHRC.

At the 2000 UN Millennium Summit President Clinton & President Castro spoke & shook hands and in 2001 US companies began selling food to Cuba. President Bush reversed the changes by imposing travel restrictions. In 2003 the US Commission for Assistance to a Free Cuba was formed to bring ‘democracy’ to Cuba. The “transition coordinator” (the same McCarry who engineered overthrow of President Arstide in Haiti) was given a budget of $59million – we all know what this would be used for! It was no surprise when Cuba was accused of possessing biological weapons was alleged against Cuba in 2009.

In 2006, the US Congressional auditors accused USAID of channeling tens of millions of dollars through exile groups in Miami – is USAID continuing this modus operandi elsewhere including Sri Lanka?

Pope Francis in 2013 brokered secret talks between Cuban & US officials resulting in normalizing diplomatic relations in 2014. Noteworthy is the lifting of restrictions by Americans travelling to Cuba and export of US computer & telecommunications technology to Cuba in 2015. Is there a link to the hacking that ensued recently? The Cuban government claims they have traced the origin of the attacks with IP addresses that generated the attack located in Florida/USA, UK,  France & Turkey. This was also linked up with protests naturally funded by the same culprits and relayed across the world to showcase Cubans against its government. This was the same module used to overthrow Iran’s democratically elected leader Mossadegh. However, pro-Government rallies showed Cubans still supportive of Cuba.

In April 2015 US removed Cuba from its list of “State Sponsors of Terrorism” & diplomatic relations were formally established in July 2015. President Obama visited Cuba in 2016 & direct commercial flights resumed months later & the first commercial flight from Miami landed in Havana after over 50 years. Then came President Trump & more restrictions followed. In January 2020 US State Dept returned Cuba to its list of state sponsors of terrorism.

Cuba’s iconic leader Castro passed away on 27 November 2017 at the age of 90 having bravely stood up to 10 US Presidents but able to keep Cuba’s flag flying!

There are many lessons for smaller nations to take from Cuba despite suffering decades of embargoes, restrictions, terrorism and assassination attempts & more.

Why is such a super power hell bent on Cuba? Why does the US want to dismantle all that the Cuban people believe in? Is it only the ideology of Capitalism vs Communism? If communism stood for nationalist interests securing a socialist state for near equal status for all, why would US wish to force capitalism down Cuba? Does America fear the example that Cuba is showing the world regarding self-sustenance? Is Cuba downplaying and highlighting the imperfect western democratic system? Is America afraid that the Cuban example will get replicated across the world and bring about the collapse of the capitalist system which is creating more disparities than equal opportunities.

Castro will always be remembered because he was a leader to the people. He was not controlled by global corporates and he was not shy to stand up to 10 US Presidents. Countries & their leaders have much to learn from Cuba and the Cuban people who know their nation has shortcomings but they also know that those that bring promises & gifts to Cuba do so not for any love for Cuba or Cubans.