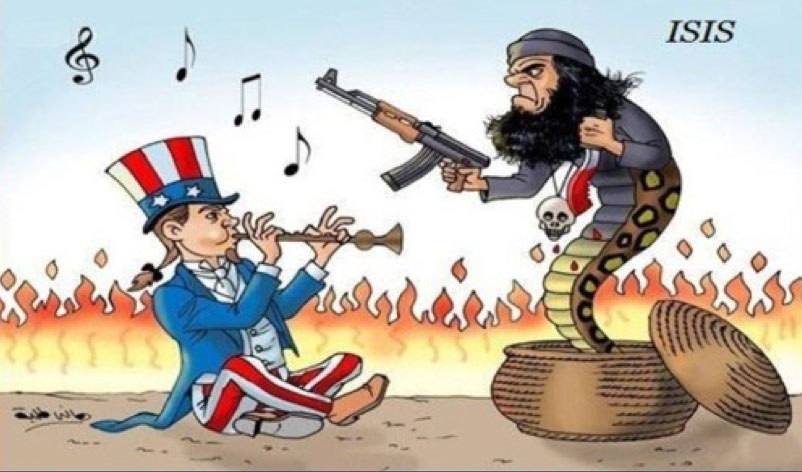 On 21st April 2019 exactly a decade after the defeat of LTTE terrorists, 8 Muslim suicide bombers blew themselves up in 3 churches, 3 hotels & 1 guest house after making a recorded pledge. This was the first Islamic suicide bombing in Sri Lanka. Was it because Zaharan & Co hated these churches & hotels or were the attacks part of a bigger plot involving a plethora of invisible others? Without determining this, Sri Lanka is being taken round the mulberry bush with canards possibly aiming to divert attention elsewhere from pinpointing the real culprits.

How did NTJ from vandalizing Buddhist statues a few months back pull off multiple attacks that claimed over 300 lives on a single day, something even LTTE could not do in 30 years! What or who promoted them to carry out such an attack!

We know LTTE had many backers & brains yet LTTE could not carry out such precision attacks even when weak governments were in power or even during the infamous ceasefire agreement where a carte blanche was given to LTTE to travel with arms.

Isn’t it odd that Zaharan Hashim began to preach in 2016 that all non-Muslims should be killed to Islamize Sri Lanka, immediately after US-sponsored regime change in Sri Lanka in 2015. The security lapses leading to Easter Sunday were many but the primary reason behind this was placing unsuited incompetent officials to sit in challenging roles probably with intent to make the security apparatus vulnerable to facilitate future plans. The former government has to be held accountable for weakening the security apparatus. The present government cannot do similar mistake by allowing advisors & canards to divert attention from catching the real culprits or at least revealing the connections for the people to connect the dots!

The war on Islamic terror is a ruse flogged for intervention.

When Zaharan Hashim & Co pledges allegiance to ISIS – it is a dead giveaway as to the real brains behind all Islamic terrorism across the world.

Immediately after 21/4 two US Govt employees were detected at Hilton Colombo Residence – sniffer dogs found explosives inside their apartment. Staff security at Hilton Colombo stopped 5 US officials checking in with 6 boxes on 30 July 2019 night. The US delegation denied the 6 boxes to be scanned. Then the boxes was loaded into a US embassy vehicle and sent somewhere else. What were in these boxes? MP Wimal Weerawansa released visa photos of the US team claiming they had arrived in a private aircraft. The team had left 2 days later WITHOUT the controversial cargo? MP Weerawansa questioned to whether the boxes were still in the country!

LTTE & its leader canvassed for a separate state with foreign backing to get LTTE to achieve what foreign backers desired. With LTTE defeated, a new pawn was needed. All of modern day Islamic terrorist groups are pawns exported/imported to create trouble.

President Carters National Security Advisor Zbigniew Brzezinski created Al Qaeda& admitted so in an interview in 1998 & 2001 to the Le Nouvel Observator that US funded Al Qaeda/Mujahideen 6 months before Soviets invaded Afghanistan. CIA head Robert Gates’s memoir in 1996 admitted $500m aid to Mujahideen. Hillary Clinton too admitted “the people we are fighting today, we funded twenty years ago… and we did it because we were locked in a struggle with the Soviet Union”.

Michael J. Springmann, chief of the visa section at the U.S. Consulate in Jeddah, Saudi Arabia, claims that the CIA insisted that the consulate approve visas for Afghanis so that they could travel to the United States and be trained in terrorism so that they could then be sent back to Afghanistan to fight the Soviets.

Author Brandon Turbeville claims “ISIS is being directed by Western intelligence, the GCC, and Israel that killing of James Mark Foley, US journalist working in Syria was used to justify aerial bombing of Syria.”

Tony Cartalucci writes that “as early as 2007 – the United States has been arming, funding, and supporting the Muslim Brotherhood and a myriad of armed terrorist organizations to overthrow the government of Syria, fight Hezbollah in Lebanon, and undermine the power and influence of Iran, which of course includes any other government or group in the MENA region friendly toward Tehran”.

He also claims“ISIS was harbored on NATO territory, armed and funded by US CIA agents with cash and weapons brought in from the Saudis, Qataris, and NATO members themselves. The “non-lethal aid” the US and British sent including the vehicles we now see ISIS driving around in”

The West defines ‘extremists’ as ‘freedom fighters’ when it suits their geopolitical goals. They use them to create the trouble & then they declare war on them to send their troops for illegal interventions.  While Muslims readily join these groups after being brainwashed with select verses from the Koran, these very Muslims end up killing mostly Muslims in the selected nations they are told to target (Middle East & North Africa Region) for global political, military & economic hegemony. Ironically, the very groups that the West train & fund end up killing the soldiers that the West sends to eliminate them. All’s fair in dirty geopolitics!

How does India & Indian intelligence fit into this scheme of things?India is today a strategic partner of the US and it is strange that India issued 97 warnings but the US envoy in Colombo claims to have not had any prior intel warnings of attacks. It is equally baffling that the then army commander, recent recipient in US Hall of Fame also declared he knew of the attacks only from the internet!

Concern over suspected IS sleeper cells in Kerala

Indian intel initially trained LTTE referring to them as ‘our boy’. The Indian intel provided no assistance to the IPKF resulting in LTTE killing over 1000 Indian soldiers. Kerala demography has changed and there is increasing jihadi presence with regular conferences being held – it is also source for much of the illegal narco-trade from India to Sri Lanka (Wilpattu key base). Muslim jihadi clerics have found easy prey in Muslims & Islam creating ready-made suicide bombers and theatre of war has now pivoted to South Asia with Sri Lanka’s ports, airports & harbors providing key geopolitical significance.

Thus, Zaharan Hashim & Co could not have committed this act simply to win applause from global ISIS because none are alive to get any applause, but they have been made pawns for a larger ideological brainwashing which will not end with Zaharan & Co or with Easter Sunday attacks. If according to the tapes released Zaharan & Co hated the intelligence that much – why didn’t they target an intelligence unit/office instead of churches & hotels! These look to be nothing but diversions by the plotters & their apologists!

The present attempts at henpecking on officials who were not holding positions or even in the country during the attacks, shows another set of pawns being let loose to divert and distract attention from connecting the dots.

A nation can be alert 24×7 but even one terrorist strike can be deadly.