Who are the Core Group against Sri Lanka at UNHRC? 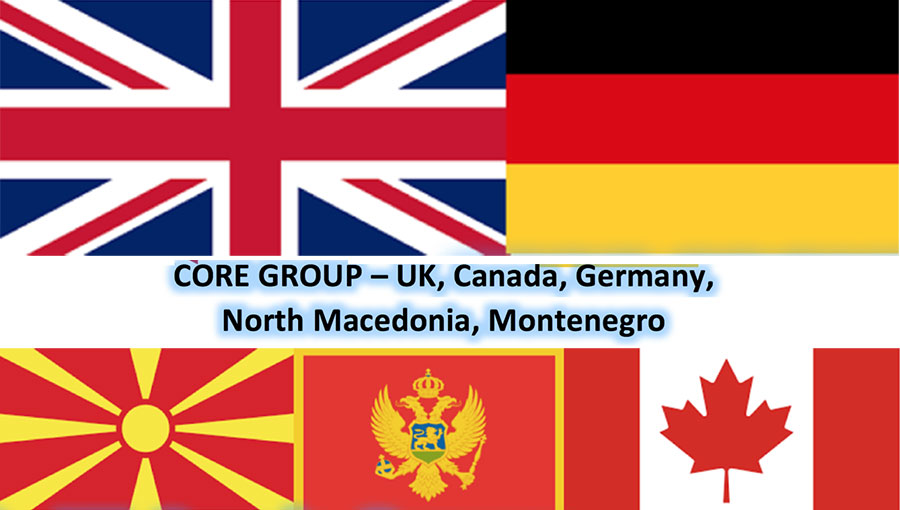 History will one day be witness to the lies, deceit and hypocrisies taking place in the Halls of the UN and in particular the UNHRC. What Sri Lanka must repeatedly exert is that all of the resolutions since 2009 claiming to be based on how Sri Lanka ended the conflict and claiming to have intentionally killed 40,000 people does not make any reference to these allegations but are following intrusive and non-conflict related demands that violate the UN Charter. All these nations passing resolution against Sri Lanka must seriously ask themselves what they did to prevent LTTE committing crimes over 30 years. Why are these countries suddenly bothered about how the conflict was fought after LTTE’s defeat this itself is a precedent being created by the UN and will impact other countries in the future as well.

At one time UK was the world’s biggest empire, invading and ruling all but 22 countries in the world. UK’s crimes thus constitute that which were committed in the name of the King/Queen by the UK military who ruled invaded nations, murdered the natives, destroyed their cultures, livelihoods and plundered their resources to build their nations back home and are now making money from displaying stolen artefacts in their museums while their Queen adorns herself with riches and gems stolen from the former colonies. UK’s rule of Sri Lanka ended only in 1972 with the Republican Constitution. From 1948 Sri Lanka accepted Dominion Status, nominal independence as the Queen remained Head of State and UK Privy Council was the highest court and military presence remained in Sri Lanka.

The colonial crimes committed by the British in then Ceylon have never been acknowledged, accounted or compensated. This is the very country preaching human rights. The crimes committed by colonial Britain come nowhere near what they accuse countries off today. The Uva-Wellassa massacre resulted in the UK Governor Brownrigg declaring to kill anything that moved and that order included even babies. The scorched-earth policy meant burning everything that was in sight with aim to start natives to death. These were crimes against humanity, these were real genocide, not the handful of propaganda filled- evidence less fairytales hiring witnesses and training them to cry to a camera taking place today. India that joins the UK in its modern geopolitical bullying may well like to go through how India suffered under colonial Britain where British governors publicly said the only good Indian is a dead Indian.

It was in UK that LTTE opened its first international head quarters in mid 1970s.

It is also in UK that the white LTTE Australian nurse trained kidnapped Tamil low caste & poor children as child soldiers to kill and even to commit suicide.

What more do we need to say about the UK that allows its Parliament to be lit to remember LTTE dead.

Yet UK has the audacity to preach human rights not even bothered about filing case against Adele for her crimes against children!

Canada is a ‘rich’ country today only because it was created after forcibly acquiring indigenous lands & resources and confining the natives to that of aliens, discriminating them, making them ill, destroying their livelihoods, denying them basic human rights, forcibly sterilizing them, sexually assaulting their children, subjecting them to torture and starvation in ‘residential schools’ and this was how the ‘immigrant invaders’ cleared lands for them to farm, for them to mine, for them to extract oil and this is how Canada became a rich nation. Simply saying ‘sorry’ Canada thinks all of its human rights violations, crimes against humanity can be erased and the obnoxious nature of Canada is such that it is patronizing other countries while its dark past remains very much one that continues to subtly carry forward violations to these natives in the present what was done proudly & openly in the past.

The author says that the “Famous Five” women long celebrated as champions of women’s rights are having their hero status questioned because of supporting sterilization of indigenous women. This is no different to how Prabakaran kidnapped and turned children into LTTE child soldiers.

Canada is guilty of ‘cultural genocide’ (as referred to by former PM Paul Martin) just as LTTE and Prabakaran was guilty of the same crime too.

https://theconversation.com/genocide-is-foundational-to-canada-what-are-we-going-to-do-about-it-118948-Genocide is Foundational to Canada

Canada which is today part of a Core-Group against Sri Lanka is preaching to Sri Lanka about human rights, gender rights and children’s rights. Canada regarded women as ‘PERSONS’ only in 1929 and ALL WOMEN in Canada was given to vote ONLY in 1960. Sri Lanka’s women gained right to vote in 1931 and the very year All Women in Canada got a right to vote, Sri Lanka produced the Word’ 1stFemale Prime Minister in July 1960.

The LTTE lobby in Canada is strong. Toronto holds the largest Tamil speaking population outside Asia. Canada is very accommodating of international proscribed terrorist organizations. Prabakaran is a regular feature for window shoppers. Far more protests by LTTE take place in Canada than the generally less than 50 persons TNA can muster up with a lunch packet, bus fare and Rs.5000.

Our blessings for Tamil Eelam in Toronto and Tamil Heritage Month in January is on course for that! In which country would the Parliamentary Secretary of Foreign Affairs an International Human Rights (Deepak Ohrai) lay a wreath for LTTE dead- we hope he does the same for Osama bin Laden or even Adolf Hitler? Canada has many LTTE supporters – Bonnie Crombie Mayor of Mississauga, Brampton City Council Mayor Patrick Brown

This Balkan country became independent in only 2006 with a new constitution formed in 2007. So its history as an independent nation is just 15 years while its leader Milo Djukanovic had led for 26 years and coined dictator too! Montenegro is a member of NATO since 2017. Freedom House in its May 2020 political rights and civil liberties worldwide report declared Montenegro as a hybrid regime and not a democracy. These are the countries passing resolutions against Sri Lanka!

In fact Montenegro is known as Europe’s Mafia State https://www.opendemocracy.net/en/montenegro-mafia-state-in-eu-neighbourhood/

North Macedonia is locked between 5 countries – Kosovo and Serbia on the north, Bulgaria on the east, Greece on the south, and Albania on the west. Its independent history is just 30 years having split from Yugoslavia in 1991.

OHCHR report on New Macedonia is nothing for the country to boast of either. 900 inmates without identification cards, limited judicial independence, politicization of the judicial oversight body, 112 persons (26 families) remained displaced from the 2001 internal armed conflict

Freedom House’s Freedom in the World 2019 report stated that “while the media and civil society are active, journalists and activists face pressure and intimidation.”

It is also interesting that while EU countries demanded immediate release of all IDPs following the end of LTTE – The 2018 Helsinki Committee for Human Rights Annual Report stated, “The provision limiting the freedom of movement of asylum seekers was retained. Namely, Article 63 prescribes that freedom of movement shall be restricted in extraordinary circumstances, in order to determine the identity and citizenship, and establish the facts and circumstances of the asylum requests, particularly if a risk for escape has been determined, in order to protect the order and national security or when a foreigner is retained for the purposes of initiating a procedure for his return or removal.”

It is very unfortunate that Germany, one of the most powerful nations in Europe have chosen to align with this core group given that Germany has been a victim of the Allies during both World Wars and suffered immense loss of lives and human rights violations. Germany should remember that immediately following the defeat of Hitler and NAZI rule the Allies held a Victor’s Tribunal where only the crimes of Germany and Germans were put on the dock. None of the crimes committed by the Allies never made it to the court room.

That Victory is celebrated as Victory Day even in the 21stcentury, while these same nations tell Sri Lanka not to be triumphalist despite becoming the only nation to end a globally banned terrorist organization. https://www.shenaliwaduge.com/75th-anniversary-of-world-war-victory-amid-covid19-germany-too-celebrates-will-tamils-celebrate-victory-over-ltte/

When Sri Lanka declared all LTTE are Tamils but all Tamils are not LTTE, the Allies declared all Germans to be NAZIs and they were subject to much humiliation and torture.

Germany may well like to go back in time to count how many Germans were expelled from the European countries they were living in.

3million Germans died after war ended (2m were women and children 1m were prisoners of war) – British historian Giles MacDonogh in ‘After the Reich: The Brutal History of the Allied Occupation” details how Germans and Austrians were systematically raped and robbed and those Germans who survived were killed in cold blood or deliberately left to die of disease, cold, malnutrition or starvation. These statistics come with evidence and proof unlike the UNHRC fairy tales of ‘genocide’ in Sri Lanka and note how all of the resolutions have nothing connected to the final phase of the conflict which was supposed to be the reasons for the resolutions.

How many Germans remember how the Allies decided to execute captured POWs. There is also the allegation that the Allies used Germans as human shields forcing them to walk through minefields.

To this day US and UK have military presence in Germany because of the status of forces agreement signed. UK & US occupied Germany even 8 years after the war ended!

So as a victim of UK, US and Allies, it is unfortunate that Germany is part of this core group because we in Sri Lanka really empathize with all that Germany and Germans had to undergo during and after the World Wars.

Sri Lanka is only an observer nation of the UNHRC – why should we travel to UNHRC annually to be humiliated?

Sri Lanka should exit from the UNHRC.

Sri Lanka is a sovereign nation – UK cannot be dictating to Sri Lanka any longer. Having exited the EU, UK is on its own and desperate to secure ties for its existence.

If Sri Lanka decides to exit the Commonwealth, many other Commonwealth nations will be inspired to do the same and UK will find itself a toothless lion!