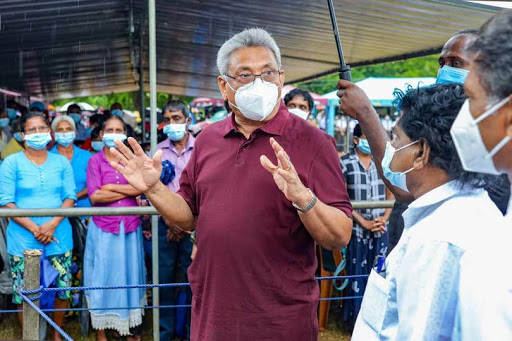 Why keep a dog and bark yourself? This is what one may have asked oneself when President Gotabaya Rajapaksa embarked on his Gama Samaga Pilisandarak (GSP) programme to help the rural folk; one may have thought the task could have been left to the state officials and people’s representatives—the members of Parliament provincial councillors and local government members. But what if the dog is deaf and mute?

President Rajapaksa, speaking at a GSP event at Dikellakande, a poverty-stricken, remote village in the Deraniyagala electorate, Kegalle, on Saturday, said some social media activists had questioned the wisdom of conducting the GSP programme, which they called a political circus; they had asked why he could not gather information about villages from public officials, the President added, noting that his approach was different, and his was not a political dog and pony show. In a perfect world, the method suggested by the President’s critics may work, but never in this country. It is not advisable for the President or any other person in the upper echelons of government to rely on the state officials to ascertain information about the people, especially their needs and grievances, for the officialdom is mostly responsible for the problems the public is faced with. What the President hears from villagers are mostly complaints against the bureaucracy; will state officials ever refer public complaints against them to the President?

Someone in authority has to reach out to the voiceless in the far-flung areas. One main reason why the rural areas became hotbeds of JVP terrorism, both in 1971 and in the late 1980s, was the prolonged neglect of those parts of the country. That may have prompted the late President Ranasinghe Premadasa to launch his mobile presidential service. The GSP, however, is not devoid of politics, as we have argued in a previous comment, but that is the way with everything political leaders do anywhere in the world.

What basically stands in the way of rural development is the migration of those who matter, including politicians, from rural backwaters to urban centres. One of the reasons given for setting up the Provincial Councils was that there had to be a second tire of government consisting of elected representatives close to the grassroots. But development has eluded the rural sector during the last three decades despite the devolution of power. Local government members who live in rural areas lack power and access to resources to carry out development work as such. The less said about the members of Parliament, the better; they remember the rural folk only during elections.

Rural schools remain underdeveloped because the children of politicians and other influential persons do not attend them. Roads in villages have remained dilapidated as those in authority rarely use them. The same is true of the state institutions such as hospitals which cater to the rural poor. This is known as the exit phenomenon. These people have slipped under the radar screen of policymakers. Presidential visits will stand them in good stead because politicians and public officials have to address their problems.

The President need not worry about social media attacks on his GSP programme, which has enabled the voiceless to have themselves heard, and, most of all, helped keep public officials and government politicians on their toes. Social media are like a river infested with piranhas; they are known for their feeding frenzies at the expense of anyone. They demonise heroes and lionise villains. The President should worry and be careful only when his enemies praise him. Mao Zedong once said that one should be cautious when one was praised by one’s enemies, for it was an indication that one had taken the wrong path. All those who strove to have Gotabaya Rajapaksa defeated at the last presidential election, nay have him disqualified from entering the election fray, and are openly supportive of the external forces that are hostile to his government and the country, showered praise on him when he said the Sri Lankan Ports Authority would partner with India’s Adani Group to operate the East Container Terminal of the Colombo Port.

Let the President be urged to take follow-up action to ensure that the orders he has already issued at the GSP events, especially the one that anyone who harms the environment by abusing his efforts to help the poor be severely dealt with, are carried out, and the progress of his commendable programme is made public from time to time.