What Sri Lanka reveals about the risks in emerging markets 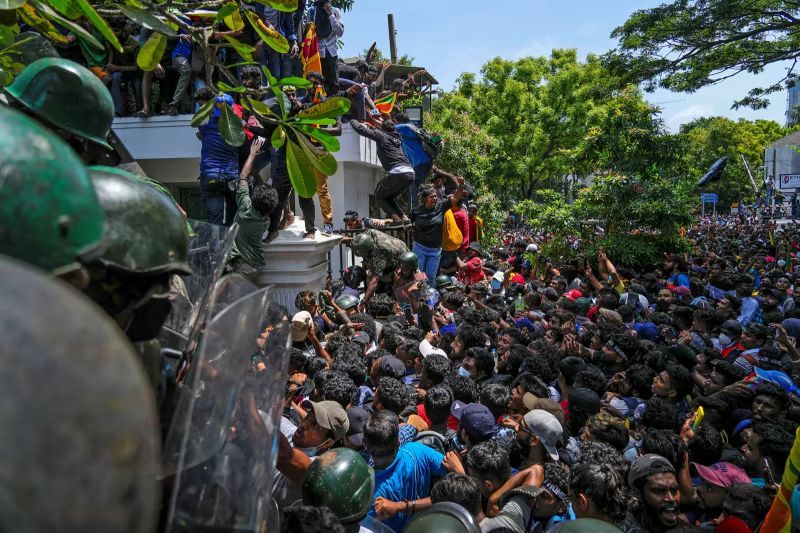 In a more optimistic era, the overthrow by Sri Lankans of a feckless government they blamed for their country’s economic collapse might have been called a Velvet Revolution. It began last Saturday when tens of thousands descended on the largest city Colombo and poured into public buildings, including President Gotabaya Rajapaksa’s official residence, amid chants of “Gota, go home”.

The president had fled for his safety, but in scenes reminiscent of many 20th-century regime collapses, the crowds hunkered down in the palace, sitting behind the president’s desk, bathing in his pool, and showering in his bathrooms.

By week’s end Rajapaksa was indeed gone — first on a military jet to the Maldives, then to Singapore, from where he finally tendered his resignation via email. With the military showing restraint, by this Friday protesters were leaving the government buildings.

While the country appears to have moved away from the brink of violent confrontation, the economy is still mired in a profound crisis. Sri Lanka now needs a new government to rebuild its economy, starting with agreeing an IMF facility, a credible government plan to rein in rampant inflation, and balancing a government budget that ran in deficit of more than 10 per cent of gross domestic product in 2020 and 2021.

But Sri Lanka’s economic and political woes are far more than a national problem — they are a dramatic example of the potential difficulties looming in a number of other emerging markets.

If the string of economic shocks that have battered the global economy are hard enough to manage in rich countries, there is even more cause for worry in many of the poorer and emerging economies that are home to the majority of the world’s population. Economic pressures bring political instability — and today economic pressures are everywhere.

After the unprecedented disruptions of the pandemic, the global economy was already suffering the frictions of reopening on still vulnerable supply chains. All that was before Vladimir Putin invaded Ukraine.

A war in one of the world’s biggest food exporters, coupled with harsh western sanctions on Russia and Putin’s manipulation of energy exports, has sent commodity prices — foodstuff, energy goods and industrial metals — rocketing. With inflation high, the US is raising rates and the dollar is getting ever stronger, which in the past has often been a spark for economic crises in the developing world.

“Emerging markets as an asset class are always the most sensitive to either economic or political risk. The way I look at Sri Lanka is the extent to which it is a canary in the coal mine”, says Tina Fordham, a geopolitical strategist and adviser at consultancy Fordham Global Foresight.

Bond yields have spiralled in a number of countries — ranging from Pakistan to Ghana and Egypt — in a sign of mounting economic stress.

“When you have a cost of living crisis it causes not just economic but social unrest”, says Gita Gopinath, first deputy managing director of the IMF. “We saw this last time we had a food crisis in 2008”, when food prices were one of the triggers for the Arab spring.

Growth is weakening, just as interest rates rise because of inflation. “Everybody is concerned about a darkening economic outlook”, she adds. “Things could get a whole lot worse”.

The world economy now combines a number of separate crises, each of which has on its own historically constituted a danger for many — but not all — emerging economies.

The first is the lingering impact of the pandemic, which not only caused such human suffering but has also left high debt burdens and less economic output from which to service it. Because poor and middle-income countries lacked the fiscal resources that rich ones lavished on their economies, the pandemic reversed the decades-long pattern of convergence where the rest of the world was catching up economically with the west. The IMF estimates that about 30 per cent of emerging markets and 60 per cent of low-income countries are now in or at high risk of debt distress.

The second is high inflation. Commodity price shocks have caused particular stress for energy and food-importing countries. The UN Food and Agriculture Organization’s food price index soared after Russia’s invasion to levels 50 per cent above the average of the pre-pandemic years. Oil prices doubled from pre-pandemic levels. Both have come down in recent weeks, but inflation has been spreading beyond those categories and is fast driving up the cost of living generally.

Egypt, the biggest wheat importer in the world, has been badly hit by soaring grain prices, but the government has not abandoned its subsidised bread programme which serves some 70mn people and is seen as crucial for social peace. The World Bank advanced a $500mn loan to Cairo in May to help fund wheat purchases.

Economists say Egypt is likely to muddle through avoiding default because of support from Gulf oil exporters who have already given $13bn and have pledged $10bn more in loans and acquisitions of government stakes in Egyptian companies. The country is also negotiating an IMF loan, which is expected to be concluded within the coming months.

This reprieve illustrates how one country’s higher commodity import bill can be another’s bumper export revenue. High oil prices, triggered by the pandemic and exacerbated by Russia’s invasion, have been good for some oil exporters such as Saudi Arabia and the UAE, which have new scope to loosen fiscal policy. Angola, Bahrain and Oman, which appeared to be running into debt difficulties a year ago, are among the small group of winners.

But even some exporters of oil and other commodities have been less able to take advantage. William Jackson of Capital Economics points to Nigeria, where local refineries have shut down for lack of maintenance and the country is having to import expensive refined products. The government also pays high fuel subsidies to the population, which more than offset the revenue boost from rising prices.

“It is really remarkable for an oil-dependent economy that rising oil prices are having a negative effect”, he says

The third factor is US interest rates. The Federal Reserve has embarked on a tightening cycle that has been accompanied by a rising dollar. In just over a year, the trade-weighted value of the dollar has risen by about 10 per cent.

In the past, such developments often triggered balance-of-payments crises in poorer dollar-dependent economies. One-third of emerging countries are paying more than a 10 per cent yield on their sovereign borrowing, says Gopinath, adding that “the risks of balance-of-payments crises are real . . . there are more things that can go wrong than can go right in the near term”.

Here, too, there are nuances. In past crises, a strengthening dollar has caused widespread distress because so many emerging economies borrowed in dollars and other foreign currencies. Today, large economies such as India, Brazil and South Africa borrow mostly in their own currencies, with most of the debt held by local investors. This has given them new resilience to external shocks.

But domestic borrowing is no free pass. If Argentina falls into default this year, as many fear it will, the problem will be local rather than foreign currency debt. “That tells you much about the highly dysfunctional macro economy and the punishing and unsustainable levels of financial repression”, says Alberto Ramos, head of Latin American economic research at Goldman Sachs in New York.

The final crisis is the impact of Putin’s attack on Ukraine, which has shaken the global governance system to its foundations. “We’ve never been in a place like this where we have supply shocks, we have inflation, we have rate hikes at the same time as we have this seismic geopolitical event with the war in Ukraine”, says Fordham. “We know that Russia has effectively weaponised grain stores as well as energy. Energy-importing countries are going to be badly affected by this”.

This week, finance ministers and central bank governors from the G20 group of the world’s biggest economies met in Indonesia to discuss the grim outlook. However, unlike in the global financial crisis, it is proving much harder for G20 leaders to adopt joint responses.

There are deep disagreements on how to handle Russia between rich countries, which have imposed unprecedented sanctions on Moscow and the big emerging powers that have avoided taking sides. Many leaders are also finding their attention diverted by political turmoil at home.

The US seems in permanent political deadlock. The UK is changing its prime minister and Italy could end up doing the same. Although France has its elections behind it, they produced a parliament without a stable majority. Meanwhile, China has its hands full handling its zero-Covid policy.

“I’m most worried about complacency”, says Fordham. “Governments can usually do one thing at a time at most. The leading nations are all very internally focused at the moment . . . [smaller] hotspots will be allowed to worsen as an unfortunate byproduct of firefighting at home and crisis fatigue”.

That does not mean nothing can be done. Diplomatic efforts to make it safe for Ukraine to export more grain also seem to be progressing. The IMF has urged countries to continue reducing their exposure to foreign currency debt and to avoid export controls on food. The fund also wants fiscal support for the cost of living crisis to target those in need with direct transfers rather than subsidise energy prices.

But more decisive international action could prove elusive. “It is a tough time for multilateralism for sure”, says the IMF’s Gopinath.