We shall overcome: The migrant’s dream is a nightmare 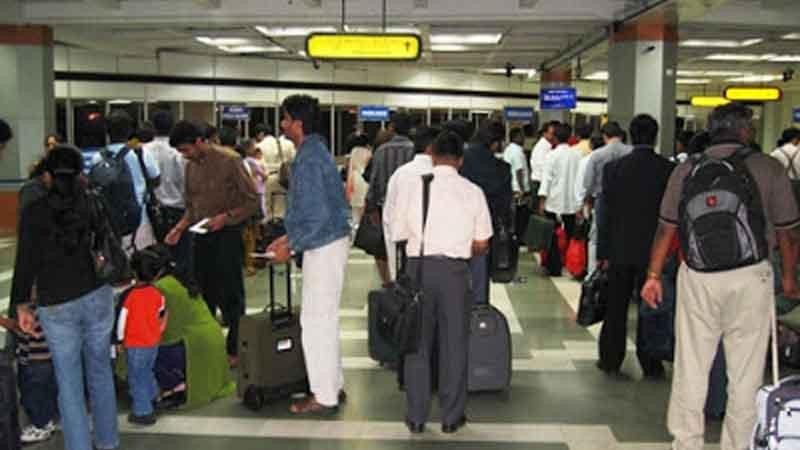 Sri Lankans were told go West, and they went. It was a part of the world that was supposed to offer opportunity, and a shot at the European or American dream. Health care was supposed to be the best available, or at least the best that money could buy.

So people jumped on boats if they were desperate but if they were not, they perennially entertained the dream of leaving. Life in any Western country was supposed to be infinitely better than on this beautiful island.

They didn’t mind the kind of work they did over there once they got across. All they wanted to do was to make it to the promised land. There was a pot of gold and streets paved in silver, and they could in addition, despise the lives they left behind.

The last few weeks have been incredibly unsettling for these people who prioritized migration. Their own Indian Ocean island was coping, no doubt with great difficulty.

But in the West, streets were not being paved in gold. They had fallen eerily silent. The hospitals were overflowing. In Spain, patients were on the floor. In the U.K, the Guardian reported, a nurse was asked to take blood samples from patients sprawled along the corridors.

There were 3,000 deaths in New York alone in the United States, the Covid-19 capital of the world. The American dream had turned into an American nightmare. None of these scenes were from Hollywood blockbusters.

The West had unravelled. Intrepid Sri Lanka was holding out while the pandemic death rate spiralled into the thousands in Europe, and in the North American continent.

Was this dystopia unplanned? Was it accidental that Western economies were reeling in the face of the pandemic’s onslaught, while the death count was mounting?

Most likely, it wasn’t. It was just that the utopia of the West was exaggerated. The streets of London were not paved with gold, but there was so much knife crime there to make a practised crime writer such as Ian Rankin want to turn up his nose.

The Sri Lankan economy will be in deep trouble too in the near term future. But, our death count is in check. Hopefully we will reach nowhere near the earthquake proportion numbers that are the death tolls in the West.

It’s a statistical reality that should make the most adventurous Sri Lankan want to radically rethink their idea of Western utopias, relative to their country of birth. When Italy was transformed into a country of death in the face of the Covid plague, the mother country offered solace to returning Sri Lankans for whom Lombardy became hell on earth — and Lanka became a beacon of hope; so talk of the return of the prodigals …

It’s the opportunity for Sri Lankans to count their blessings and rethink their notions about migration to countries that cannot cope in the face of a crisis. We do not know where our economy goes from here.

But it appears that our country has not been totally dehumanized by the virus as it has happened in the utopias of the West. While western democracies failed in the task of instilling disciplined lockdowns, Sri Lanka did it with close cooperation between an elected civilian government and a reliable and efficient military.

Our health services will certainly not be able to cope with the kind of death tolls that are now the norm in most of Europe and North America. But our democracy was able to stave off such a necessity, at least thus far. Though we are not out of the woods and there is still no room for celebration while the country is essentially under lockdown, the scenes of chaos and death in the West should reorder our priorities.

We could rise as a nation, when all of this is over, and appraise the aftermath from a better place than any western nation. All of that should stem the tide of migration to these countries.

That dream doesn’t seem to be viable any longer. Our economy cannot look inward, but if we come out of this in better psychological shape than the average citizen of Europe or North America, we could home-grow our strategy to rebound from this crisis.

We may not find markets because foreign economies are ravaged, but we could produce at home. We could think of a clean break from our dependency economies of the past. We could also be satisfied with our democracy because it showed up as one that works, in relative terms.

There is no earthly use of a democracy that cannot use its armed forces to stave off a spiralling, macabre death count. We kept our democracy intact, and we deployed the military. We showed that as a people, we can walk and chew gum at the same time.

It’s an attribute that seems unavailable in western democracies. They either walk, and chew gum later or vice versa. These utopias don’t seem to be able to deploy their militaries while maintaining their democracies, and that’s because it goes against the ‘grain of democratic governance’ they are used to, they tell us.

In that case, we take it that their national psyches must be used to death counts in their thousands?

We don’t need to compare anything. We just need perhaps a reverse brain drain and the right mindset to get the ship of State back on an even keel first, before we position this country as an exemplar of disciplined democracy, with potential for self-sustaining economic growth.

We have to be smart. Those of us who have studied the western liberal democratic model and not yet realized that it has failed miserably, are ready with lectures on how we should be more lawful, even granted that there is a real crisis facing the people.

They may have a subconscious desire to have our death count reach the proportions in the Western world, courtesy a democratic arrangement that approximates the model in those countries i.e: one that does not work.

But our military is not a hawkish one. It performs at all times, wartime or peacetime. It’s a military that has the interests of civilians uppermost, because there are no military conquests that our army covets.

So democracy is never at cross purposes with military instilled discipline in this country.

Nobody here says that we cannot deploy the military to enforce a lockdown in times of a pandemic, because ‘we are too used to our freedoms.’

The calls for lawyerly legal interpretations of extraordinary provisions at this juncture are based upon a wrong reading of the political culture of democracies.

Democracy doesn’t mean that a government watches while its citizens perish, while the law is observed to the letter. That’s why democracies deploy militaries, and use extraordinary powers in times of emergencies.

So we do not need that lecture on how democracy should work from those wedded to the western liberal democratic models.

Our model worked, theirs didn’t. They didn’t have a model, if you ask me. A model that spawns death — large scale civilian casualties — is not a model at all. It may be a model for a dystopia, but it cannot be a model for democratic governance.

We should now look at the other side of this lockdown, and not be misled by calls to revert to the status quo ante by reconvening a much discredited parliament that was anything but a model for democratic governance, with a Speaker who had run amok, and a majority of whose membership had lost its mandate.

Going back there is not an attempt at democratic governance, it’s an attempt to mimic the western dystopia almost by rote. The fact that we have said goodbye to all notions of normality due to the pandemic, is no reason to let go of our better senses.