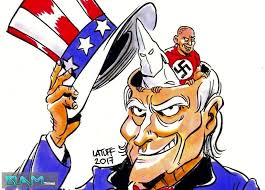 Wars. Nations. War-like nations. Like-war nations. Raja Raja Chola, a name almost coterminous with the Golden Age of the Cholas, was war-like. He liked war. He plundered and with the loot built temples. He, unlike the European barbarians, made a note of it; mentioned which peoples’ wealth robbed went to create the magnificent temples.

For example, there are stone inscriptions at the temples in Tanjavur and Ukkal where he mentions ‘Ila Mandalam’ (his name for this island) and describes it thus: ‘The land of the warlike Sinhalas.’

Warlike, because the Sinhalas liked war or because they fought the good fight in defense of land, beliefs, lifestyles etc., we do not know. Warlike, nevertheless.

Raja Raja Chola is a late 9th and early 10th century warrior. Let’s do a millennial jump to 2019. Here’s what the only US president to complete his term without war, military attack or occupation had to say about his country: ‘the most warlike nation in the history of the world.’

He asks an interesting question: ‘Since 1979, do you know how many times China has been at war with anybody?’ He provides an answer, ‘none’ that’s not very accurate. China did attack border regions of Vietnam with artillery in 1979 and there was a naval battle with that country in the 1980s.  That’s it.

How about the USA, then? Here’s Jimmy: ‘The US has been at peace for only 16 of its 242 years as a nation.’ That would be the last year of the Ford administration, 1976 and the Carter years, 1977-1980, except that in 1980 the US did support Afghan rebels battling the Soviet-installed government in that country. A blip, all things considered.

Anyway, Jimmy’s referring to wars, military attacks and military occupations and these alone make the USA warlike unlike any other nation. No wonder comedian and political critic George Carlin speaking of his country, the USA, said ‘we like war…we are a war-like nation!’

Now add the fact that the dozens of countries the USA has invaded or bombed, support extended to almost every right-wing dictatorship since World War II, the overthrow or attempted ouster of dozens of foreign governments, and direct and indirect involvement in attempts to defeat  nearly every single people’s liberation movement, not to mention meddling in countless elections (including those in Sri Lanka) in nations considered allies or adversaries, and you do get quite a grotesque monster.
How’s that for a lunch-munch?