Violation of due process in international commitments 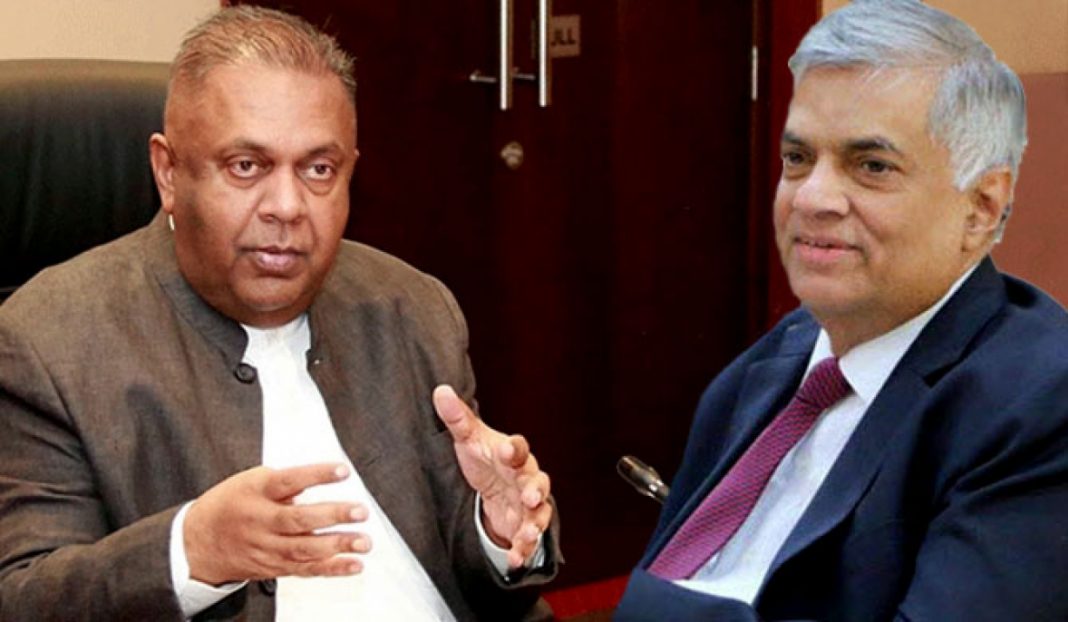 Referring to his role in the 2015 UNHRC Resolution 30/1, Mr. Mangala Samaraweera as the Foreign Minister of the former Government made a startling revelation that contradicts the common understanding in Sri Lanka as to who sponsored and who co-sponsored UNHRC Resolution 30/1 (Ceylon Today, April 1, 2021). He is reported to have stated: “To say that Sri Lanka sponsored a resolution alone is an utter misleading lie…Although there had been 29 countries supporting Sri Lanka at the UNHRC in 2009 right after the war, the support dwindled down to 12 countries in 2014 when the UNHRC initiated a probe against the country for human rights violations”.

According to the report ‘he had appealed for the UNHRC to give the previous Government a little more time till September that same year to present the country’s own resolution for a national independent judicial mechanism. Then Premier Ranil Wickremesinghe, with a group of top level experts, drafted the resolution and invited the U.S. Ambassador and the UK High Commissioner to co-sponsor the resolution’.

The issues that arise from a literal interpretation of these comments are:

1. Even if Sri Lanka took the “initiative” to draft the resolution and invite the U.S. and U.K. governments to be co-sponsors, the eventual outcome was that the roles reversed and Sri Lanka ended up being the co-sponsors. It was this that led to Foreign Minister Dinesh Gunawardena stating at the 43rd Session of the Human Rights Council: “It is in this context that I wish to place on record, Sri Lanka’s decision to withdraw from co-sponsorship of Resolution 40/1… which also incorporates and builds on proceeding Resolutions 30/1 of October2015 and 34/1 of March 2017”.

2. Mr. Samaraweera also states that PM Ranil Wickramasinghe and a “group of top level experts” drafted the Resolution. If so, how come the PM together with the “top level experts” missed the fact that the judicial mechanism proposed in Paragraph 6 of the Resolution violates the Constitution, as admitted by the former Foreign Minister Mr. Tilak Marapana at the 40th Secession of the Human Rights Council when he stated: ” “The Government of Sri Lanka at the highest political levels, has both publicly and in discussions with the present and former High Commissioner for Human Rights and other interlocutors, explained the constitutional and legal challenges that preclude it from including non-citizens in its judicial processes. It has been explained that if non-citizen judges are to be appointed in such a process, it will not be possible without an amendment to the Constitution by 2/3 of members of the Parliament voting in favour and also the approval of the people at a referendum”.

It is inexplicable how the then PM and top-level experts failed to realize the “constitutional legal challenges that preclude from including non-citizens in its judicial process” during the drafting stages of Resolution 30/1. This is not so inexplicable considering that top level experts who were involved with the Task Force on Reconciliation Mechanisms also recommended that a Hybrid Court should conduct investigations into violations committed during the armed conflict without realizing the constitutional and legal challenges involved. A possible explanation for such serious lapses is that these top experts believe that because constitutional and legal challenges have been overcome in the past by governments violating due process, they need not concern themselves about such trivia. Resolution 30/1 is one instance where the gamble of the top-level experts failed when Sri Lanka withdrew from co-sponsorship.

VIOLATION of DUE PROCESS

Violation of due process was brought to the attention of the HR Council when Foreign Minister Dinesh Gunawardena at the 43rd Secession stated; “”Procedurally, in co-sponsoring Resolution 30/1, the previous Government violated all democratic principles of governance – it declared support for the resolution even before the draft text was presented – it sought no Cabinet approval to bind the country to deliver on the dictates of an international body – there was no reference to Parliament on the process, undertakings and repercussions of such co-sponsorship – more importantly the Resolution itself included provisions which are undeliverable due to its inherent illegality, being in violation of the constitution, the supreme law of the country”.

Since the former government co-sponsored Resolution 30/1 without due process and furthermore, because the resolution contained provisions that violated the Constitution according to the present and former Foreign Ministers, Sri Lanka was in a position to legitimately withdraw from co-sponsorship because of provisions in the Vienna Convention. Article 46 of the Vienna convention states: “A State may not invoke the fact that its consent to be bound by a treaty has been expressed in violation of a provision of its internal law regarding competence to conclude treaties as invalidating its consent unless that violation was manifest and concerned a rule of its internal law of fundamental importance”. Thus, since a Constitution is the most basic of a State’s “internal law of fundamental importance”, a State has the grounds to invalidate its consent to be bound by UNHRC Resolution 30/1. The flaw in the UNHRC Resolution tabled at the Forty-sixth Secession is that it fails to recognize Sri Lanka’s withdrawal from Resolutions 30/1 and 40/1.

EAST CONTAINER TERMINAL and VIOLATION of DUE PROCESS

Another instance where due process was violated was in connection with the East Container Terminal. Due process requires that this project should comply with Article 157 of the Constitution that require a 2/3 approval of Parliament whenever a project is “essential for the development of the national economy”. The sub-titles to Article 157 is “International Treaties and Agreements” and the Article itself state: “Where Parliament by resolution passed by not less than two-thirds of the whole number of Members of Parliament (including those not present) voting in its favour approves as being essential for the development of the national economy, any Treaty or Agreement between the Government of Sri Lanka and the Government of any foreign State for the promotion and protection of the investments in Sri Lanka of such foreign State, its nationals, or of corporations, companies and other associations incorporated or constituted under its laws, such Treaty or Agreement shall have the force of law in Sri Lanka…”.

Whether a Treaty of Agreement that does not have a 2/3 approval of Parliament has no “force in Law in Sri Lanka” is not the issue. The issue is that any project that is “essential for the development of the national economy” should have a 2/3 approval of Parliament. The East Container Terminal project was not even tabled in Parliament making it another instance of the violation of due process.

Instead of complying with provisions of due process required by the Constitution, a small group in the former government entered into an “understanding” with the governments of India and Japan to build operate and transfer the East Container Terminal. As with the co-sponsorship of UNHRC Resolution 30/1 without due process, in this instance too the former government violated due process, thus enabling the present government to abrogate whatever “understanding” that Sri Lanka had with the governments of India and Japan. Judging from media reports, the same fate would be experienced by this government if it ignores due process with the West Container Terminal. The lesson to be learnt is that short term gains are truly short term, and that such gains come not only at long term costs to governments, but also to international relations and ultimately to the people.

Other countries too, resort to violation of due process. For instance, according to a report in The Hindu the Maldivian Defence Minister Mariya Didi had signed a pact with India without approval of Parliament. This resulted in 51 legislators of the 87 member calling for an emergency motion demanding greater transparency in bilateral pacts. Apparently, the India’s External Affairs Minister S. Jaishankar who was in Male had tweeted: “Glad to sign …the UTF Harbour Project Agreement. Will strengthen Maldivian Coast Guard capability and facilitate regional HADR efforts. Partners in development, partners in security”. The Maldivian Defence Minister is reported to have stated: “Given our expansive maritime territory, the need to enhance local coast guard capabilities cannot be overstated… This dockyard and harbor will, in time, afford us the opportunity to protect our maritime interests on our own thereby enhancing our sovereignty”. Sounds perfectly justified, but the fact is that it violates due process judging from the protests of the Maldivian legislators. Prior to this, an article in the Institute of Peace and Conflict Studies by Dr. Narayanan states: “On 10 September 2020, Washington and Male signed the ‘Framework for U.S. Department of Defence – Maldives Ministry of Defence and Security Relationship’. This agreement ostensibly intends to deepen bilateral efforts towards maintaining peace and security in the Indian Ocean region”. Whether this agreement had the approval of the Maldivian Parliament is not known. Whatever the case may be, the hard reality is that the Maldives is totally linked up with India and U.S. on security related issues.

From the material presented above it is crystal clear that the trend is for major powers to engage with strategically positioned states to further their geopolitical interests by seeking arrangements that do NOT conform to constitutional and legal procedures of the state concerned, but through arrangements that violate due process. The primary reason for this being that the latter approach lends itself to arrangements that are more favourable to the major powers than resorting to the former. In the case of Sri Lanka, the examples cited above where Sri Lanka became a victim of this trend was in connection with co-sponsoring UNHRC Resolution 30/1 and the “understanding” reached between Sri Lanka, India and Japan on the East Container Terminal, and now perhaps with the West Container Terminal as well. The other example cited is in connection with the agreements reached between the Maldives, India and the U.S. relating to maritime infrastructure and security.

India and the U.S. along with Japan and Australia are part of a security alliance known as the Quad. Maldives has links to both U.S. and India even though it may not formally be part of the Quad. In addition, from a standpoint of strategic positioning, the Maldives, as it is with Sri Lanka, is almost midway between the choke points of Straits of Hormuz and Malacca. In such a background the links that the Maldives forged with India and the U.S. have to impact on Sri Lanka because Sri Lanka’s policy of neutrality isolates it in respect of the security relationship with the Quad and China, while engaging commercially with both and the rest of the world.