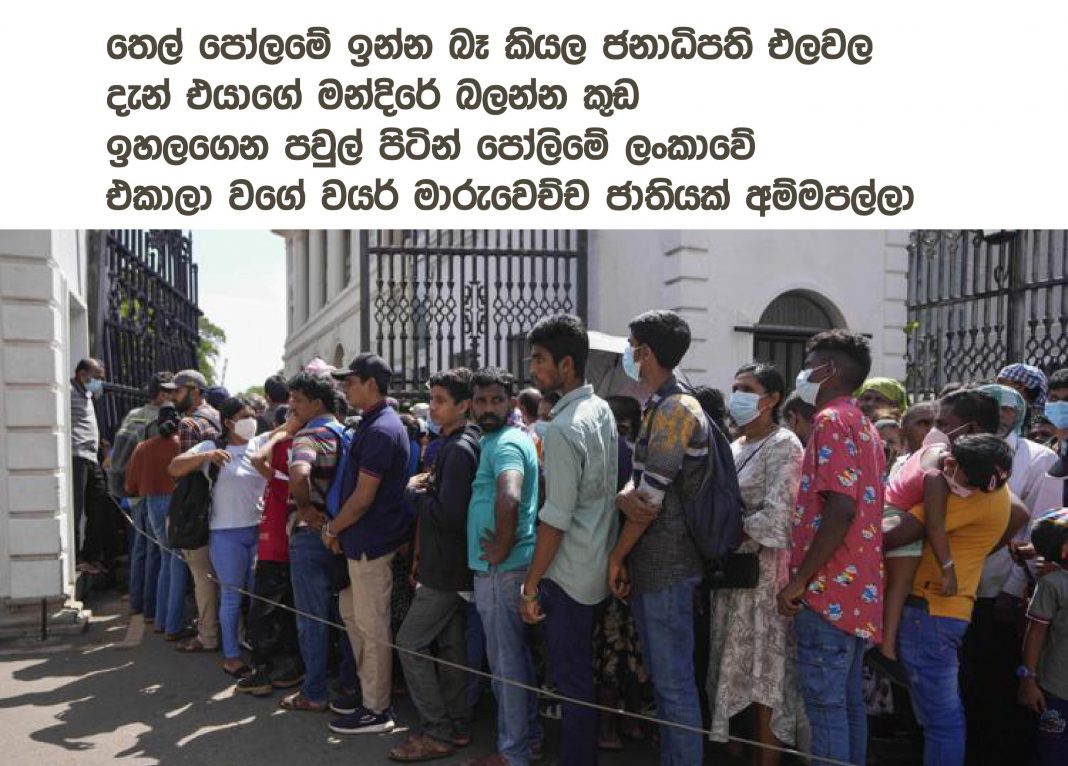 Any uprising cast as being spontaneous invariably runs into a bunch of problems, the most serious being the one about credentials. Who speaks for the aragalaya, one could ask. If anyone claims he/she speaks for the aragalaya (and many have, as individuals or groups), the immediate question is, who gave him/her the authority and on what grounds? This of course doesn’t necessarily mean that spontaneous mass uprisings are bad or are bound to fail. Sometimes things unfold and it is in the unfolding that leaders emerge.

As one might expect, the surge, whether all spontaneous or subtlety orchestrated (yes, such things happen too), made many want to have a piece of it. It was a low-cost adventure for many who had for years benefitted from a rotten system but had never once complained. Yes, they would whine now and then when preferred parties/politicians were out of power but even when sworn enemies were in power, they never balked at exploiting the very same rotten system.

There were those kinds of people, largely Kolombians who had most likely voted for Ranil/UNP or Sajith/SJB, Kolombians who were suffering from lifestyle deprivation but were certainly not feeling anything like the pinch that most people in the country were experiencing. They were a small but significant minority in the aragalaya. Their posts were in English. When they tried to speak in Sinhala, it was actually funny. Mind you, the issue was not that Sinhala was not their mother tongue.

Why am I talking about these politically marginal set of people, you may be wondering. Well, there’s a note that’s being circulated titled ‘’Why did we join the aragalaya?’ It is signed by ‘We, the people.’ Obviously convenient but possible dodgy. An interesting and telling read, though.

In Number 4, there’s a slip from ‘we’ to ‘I’. I noticed in similar posts that this has been since corrected. It’s a personal angst obviously, but then again it is collectively subscribed to, going simply by the fact that it is being shared on multiple social media platforms. Ok, that’s out of the way.

Here are some questions: did ‘these people’ a) benefit or not from ‘the system’? b) did they always vote SLFP (or SLFP-led coalition) or did they vote for Ranil/UNP or Sajith/SJB? c) did they ever protest these nasties when the UNP or UNP-led coalition or coalitions the UNP was part of?

There’s talk of economic stability, civil liberties and rights, the upholding of the constitution, legislature and the preservation of democratic values. Lovelies, all of them, BUT, again, were these things sitting pretty until November 2019? We can run through three to four decades, name parties, name individuals and name ideologies and policies that took potshots at one and all. So here’s the question: did these worthies utter a single word about those other transgressions?

The darlings are claiming that they did not favour anarchy, violence or empowerment of subversive elements who would deem to overthrow democratic values. Lovely. Let’s break it down.

Throughout this aragalaya there were calls for and affirmation of anarchy. Sure, not all aragalists were anarchists in ideological bent or in action, but only the myopic and naive could dismiss the possibility that anarchy of the worst kind was festering and could very well erupt. Forget all that. Did these lovelies who are now in whine-land ever once say ‘hey, hey, hey…ease off guys’? Mirihana. Rambukkana. Warakapola. Temple Trees. Galle Face. President’s House. Ranil Wickremesinghe’s residence. Parliament. And let’s not forget the vandalism, arson, thuggery etc., that followed the unleashing of thugs from Temple Trees by forces beholden to or controlled at that time Mahinda Rajapaksa. Who called for, who indeed demanded anarchy and violence? Who called for and demanded subversion, who indeed subverted? What were the democratic values affirmed by pillage, destruction of public property, arson and thuggery? Why this sorrow now, but not then? Is it ok to be selective about these things? Is it ok to just go along, look askance when unpleasant things happen until the process yields an outcome that is, well, ok? And if the outcome is ok for you but not for others, if those others continue to do what you called for, cheered, took part in perhaps or supported one way or another, do you have a moral right to object?

Regardless of who started the fire (and it was certainly not lit in November 2019), if those who were mandated to quash it did not or could not, regardless of unforeseen and unfortunate circumstances (Covid-19, which by the way Gotabaya Rajapaksa did much to quash — efforts which were scoffed at by, I suspect, ‘these [very] people’: no cheers for all that by the way), then they can, do and even must come under fire, so to speak.

People were angry. People protested. Legit. People made demands that could not be delivered. That’s ok, for that is all legitimate in politics. Gotabaya could have come clear, said the unpalatable truths, expressed regret for errors despite good intention (let’s say), stated options being considered (if there were any) or simply said ‘there is a crisis of legitimacy, I agree, and therefore I believe that the democratic thing to do is to hold elections so the people can decide for themselves.’ He didn’t. Is that enough to call for his blood, though? If it was enough, then why didn’t ‘these people’ call for the blood of other who did much worse for so many decades?

Democracy. Let’s get back to the word/term. There are values associated with democracy and ‘these people’ have mentioned this. There’s also a thing called ‘representation.’ And so, sorry lady/ladies and/or gentleman/men, we need to unpack ‘the people’ a little, if you don’t mind.

How do we know what a collective really wants? How do we obtain the popular will? Well, elections. Sometimes there are mass uprisings. Mass uprisings can be orchestrated, particularly in times of hardship, but let’s assume that’s not what happened here, just for argument’s sake. So yes, there’s a mass uprising. What was it about? Well, it was reduced to evicting an elected president. There were some noises about system change, yes, but nothing to write home about.

And so you had ostensibly classless, religion-free, ethnicity-erased and even ideology-free people coming together. They even said it was a ‘nirpaakshika aragalaya’ or a struggle free of political parties. Now, they got what they wanted: Gota left. All well and good. Now what? Struggle done and dusted? Victory achieved? Now that Gota has gone home, should everyone else also go home? But why should everyone go home? There was no agreement was there that if and when Gota does go home, everyone would pack up and go home themselves? Things evolve and even if they didn’t, there are people out there who are not necessarily ‘these people.’ They have political aspirations whose shelf life haven’t expired. There was no referendum on what ought to happen, after all. It was assumed that the entire country, the entire voting population wanted Gota out. Now, without a referendum, can anyone claims that the entire country wants the aragalaya to fold up and the aragalists to go home? That’s the problem of representation. No election, no way to verify anything like that. If some want to go home, sure. If others don’t, so be it. And those who left cannot tell those who didn’t ‘well, the kind of anarchy we cheered is no longer acceptable.’

‘These people’ claim, ‘What’s happening now is NOT [THEIR] ARAGALAYA! So what happened before ‘no’ WAS their aragalaya? The arson, thuggery, looting, pillage and destruction of public and private property before July 9 WAS their kind of Aragalaya? And is it that THEIR aragalaya is done? Is Sri Lanka now ‘all set’? Is there no political crisis any more? Has the economic crisis been resolved?

Let’s hypothetically fast-forward to, say, August 9, 2022. There are still long queues for petrol and diesel. There’s still galloping inflation. The constitution is intact (interesting fact: talk of repealing the 20th, restoring the 19th and so on seems to have disappeared). Presidential powers: intact. Sajith Premadasa is the President. There is no IMF bailout or there is and they’ve imposed conditions which exacerbate inequities and deprivation over and above ensuring chronic dependency and slavery. People are as or more anxious, fearful and incensed as they were in April, May, June and early July, 2022. The people storm the barricades. The people weather teargas, disregard water cannons, brush aside policemen and soldiers and aim to re-take President’s House, Temple Trees, Prime Minister’s office and the Presidential Secretariat. What would be the take of ‘these people’? Would they spur the aragalists to do what they’ve done in all these past few months? Would they say ‘go ahead and threaten politicians’? Would they, on social media platforms egg them on to search, ransack and burn houses? And if all that did happen, would ‘these people’ (as they did before) remain mum?

‘These people’ are not woolly-headed. They are not in cloud cuckoo land. They knew and know what they wanted/want. There are outcome preferences that have nothing to do with systems, systemic flaws and assaults on the rule of law, democratic institutions and values, and human rights.

‘We the people.’ I would love it if anyone who has posted, re-posted or shared that note has the courage to put his/her name to it. Then, we can do a background check and figure out who is who and what is what. In the name of democracy, decency, transparency etc., etc., etc. How about it, ‘[the] people’?

When the centre cannot hold…

Recipes for co-opting and subverting #peoplepower

The international community, the opposition and ‘the people’

The ‘aragalists’ and the challenge of re-mapping Sri Lanka

Tomorrow, tomorrow and so forth…

The brink and beyond

Spontaneity and its discontents