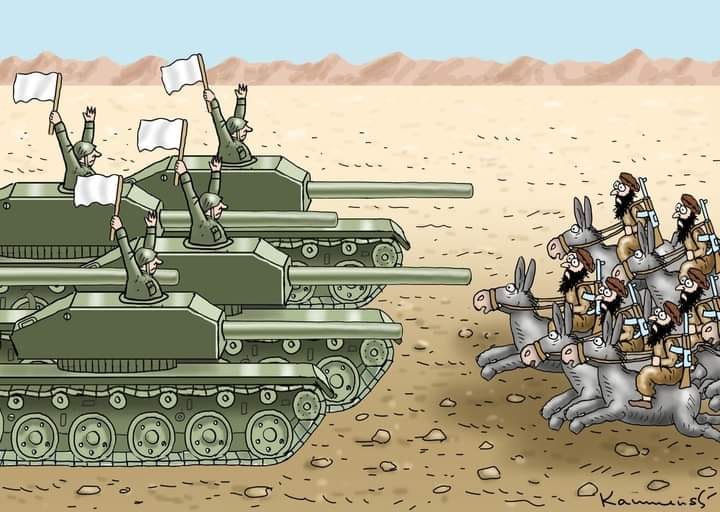 Are America’s wars, on behalf of US citizens or to fatten the bank accounts of American corporations & defense contractors (who sponsor Members of Congress) as well as to ensure there is no alternate economic model to the ‘capitalist’ model US & West promotes? The list of US interventions since 1945 and the state of these countries thereafter should provide answers to countries lining up to be America’s ‘partner’ in South Asia or any other part of the world. India & Sri Lanka must redraw its foreign policy taking stock of the situation.US citizens have to pocket $2trillion for 20 year US presence in Afghanistan but it was the US Corporates & Defense contractors that walked away with the bounty (opium/gas/oil/minerals). Is this the model being followed elsewhere too! The victims of all US interventions are the US citizen, the US soldiers, the citizens of the nation’s US ‘delivers democracy’ to.

The excuse the Biden administration gave for the sudden transition is that Afghanistan has to look after its own internal affairs. A realization that took 20 years and almost 50,000 lives! Or is this exit to trap China just as US did with Soviet Union?

US has no parallel competitor to match its interventions. How many of these ‘interventions’ are of national interest as against corporate interest is a question that remains unanswered. US foreign wars has placed the American citizen in $23trillion debt and 99% of the Americans don’t even know the locations of the countries US intervenes in.Most don’t even know why. Have Americans thought of why US declares ‘war’ on countries that have not declared ‘war’ on America? Afghanistan is a good example.

US citizens have to pocket $2 trillion for 20 years of US invasion & occupation of Afghanistan.

What did the US citizen get?

2400 US soldiers dead (38,000 Afghan civilians dead)
More than $350b for veteran medical & disability care
60% of the $2trillion was spent on training US/Afghan army, fuel, armored vehicles & facilities
8% of the $2trillion ($3 to $4billion annually) spent on transport
14,000 troop presence & NATO presence could not stop a bunch of dirty clothed men holding guns supplied by US
More than ¼ of Afghans are unemployed
When US citizens are living off food-stamps, living in cardboard boxes, without healthcare – US Govt has spent $15.5b in Afghanistan & charging US citizens!
Which US & international companies plundered Afghanistan’s rich mineral resources and how much have they made in 20 years?
https://samvadaworld.com/big-block-of-4/the-great-game-over-rare-earth-minerals-in-afghanistan/

How much did US spend to ‘fight’ opium cultivation (ironically before 2001, Afghanistan had almost completely eradicated opium- UN data)

Why is the US Govt paying a Swiss-based company since 2005 (Supreme Foodservice) $5b to feed US troops in Afghanistan with allegation of overbilling by $757m?

Why have no-bid contracts (granting monopoly) also gone to controversial DynCorp International, KBR, Fluor Corporation $5b per year each.

To understand – the interview with Gen. Wesley Clark showcases the intent of the US Government and also raises the controversy behind 9/11 Twin Tower “attack” as a ruse to justify the memo that came down from the US Secretary of Defense’s Office detailing how US proposed to ‘take out seven countries in five years starting with Iraq and then Syria, Lebanon, Libya, Somalia, Sudan & finishing off with Iran”. Surprise, surprise – all of these countries have been ‘taken out’ and Iran remains the only obstacle! https://www.youtube.com/watch?v=z8ityb0Ips4

William Blum’s list gives a clearer picture though it leaves out US invasion & takeover of Hawaii and covert role in Rwanda’s genocide in 1994.

If 9/11 was staged, it meant that those responsible did not care to sacrifice lives of US citizens. This same logic is now applicable to the covid as the largest number of lives lost are US citizens. We came to know the truth about the 1918 Spanish flu only in 2005. We may not be alive to know the truth about who ‘created’ covid & why. Nothing can be put past a country that has ‘manufactured’ reasons to ‘invade/intervene’ in nations. The list of lies invented are many – bogus WMDs, incubator baby deaths, ’40,000’ dead in Srebrenica, ‘liberate Libya from Gaddafi’, ‘save Syria from Assad’.

Are these interventions/invasions that the US citizens end up paying for, really for the benefit of the US or the corporates that greedily await to ‘descend’ and plunder these countries in the guise of ‘developing’ them.

Is US foreign policy covering citizen interest or US corporate interest? All of the interventions have only served to secure prospects for US corporates & their international partners while stamping any nationalist attempts of targeted nations to come out of debt-deadlock that Western monetary entities force nations to comply with.

Nationalist policies meant the fate of Iran’s Mossadegh who was overthrown by US & UK to install the Shah of Iran and ensure US & UK were given 40% shares each of Iranian oil. US overthrew the democratically elected leader in Guatemala (Arbenz) had nothing to do with American citizens simply because President Arbenz nationalized a US firm (United Fruit Company) which was closely linked to US elite.

1970s – Did US trap the Soviet Union in Afghanistan via its operatives working in Pakistan? The mujahideens that the US created are today’s Taliban/Al Qaeda & ISIS. https://www.youtube.com/watch?v=tzlV3y-NE1w
Did US create the Mujahideen, Al Qaeda & Taliban? https://www.youtube.com/watch?v=pd6gldt0r04
The 9 year conflict killed an estimated one million civilians, 90,000 Mujahideen fighters, 18,000 Afghan troops, and 14,500 Soviet soldiers
2001 – Why did US attack & invade Afghanistan without even investigating links to 9/11. Why did US help create NATO (EU bloc nations military alliance) US NATO and UN are operating together in Afghanistan?
Has the ‘occupation’ been just a game for the ‘brains’ that planned to send boots to Afghanistan? Are these ‘brains’ bothered about the US-NATO soldiers who have died or got crippled for life? Do these soldiers know why they are even in Afghanistan? Let’s not forget that even the lives of diplomats have been sacrificed! (US envoys killed in Pakistan & Libya)
How linked are these Western ‘brains’ with the ‘brains’ of the Al Qaeda/Taliban/ISIS or any other Islamic fundamentalist groups that operate all to Western advantage. Are the brainwashed Islamic recruits also just toys and pawns in a larger game.
If Bin Laden was a family friend of the Bush family and the same Bin Laden became the head of the Mujahideen and later Al Qaeda – was this ‘shift’ with ‘understanding’ of both parties? Is this why we were shown a Hollywood version of US Navy Seals ‘killing’ Osama sans a ‘dead body’ as proof. Maybe he’s enjoying a tequila somewhere in the Caribbean! Is this the same fate of ISIS leader Abu Bakr Al-Baghdadi too!

The deliverers of democracy project themselves as advocators of Women’s & Childrens rights but no sooner they install their ‘insurgents’ for their ‘agendas’ the first casualties are the women & children. Afghan women, like Iranian women were enjoying freedoms until US sponsored Mujahdeens, Taliban, Al Qaeda & ISIS – thereafter women went from wearing mini-skirts to be covered from head to toe, women who excelled in studies/education soon became simply sex toys for men and increasing numbers of children given as child brides. How proud US & EU nations must be!

The US cares not what the world thinks about its track record. Its diplomats are proud of what they have achieved. The question is are policy advisors of other countries ready to be a pawn in US corporate agenda advocated via both political parties in US which has nothing to do with what the US citizen wants or needs.

We do not wish to have Sri Lanka become another pawn of US corporate agenda, where looting gets shared with the US /international partners & the local pawns!

Life was never any better under the Mujahideens, the Al Qaeda, the Taliban, the ISIS or even with US & NATO boots for the people of Afghanistan.