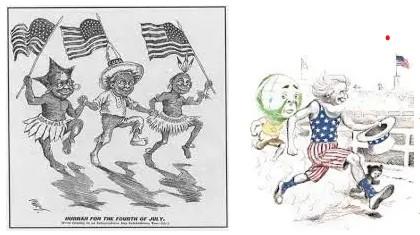 “Organised groups of hoodlums, working on carefully choreographed patterns of arson and destruction, unleashed terror with military precision on the country’s Legislators, torching their properties, lynching some and attempting to create a ‘Gaddafi’ style scenario in Sri Lanka.”

Jonathan Manz, in an article circulated by “The Sri Lankan Study Circle” whose background & politics is not known to Thuppahi…. with the title they have imposed being “Pivot-to-Asai: America executes a Lightning coup to take control of a Strategic Island in the Indian Ocean”

Bewildered, reeling and confused, Sri Lankans are just beginning to pick up the pieces of the jigsaw to decipher the events of Black-Monday, 09 May 22, when America, with its all-too-familiar ‘false-flag’ operations, executed a lightning Coup, to take control of the strategic Island in the Indian Ocean.

Taking control of the Island-Nation was critical to the Americans to implement their re-chartered game-plan for the Indian-Ocean region; this plan, they were compelled to develop following the unexpected defeat of their proxy mercenaries in Sri Lanka.

A military-style appreciation was sketched-out by John Kerry in his report of Dec 2009 and subsequently fleshed out into an action-plan, code named ‘Pivot-to-Asia’, by President Obama.

Populist leader, Mahinda Rajapakse, an unrelenting thorn in the side of the Americans who consider Sri Lanka their holy-grail, was unceremoniously deposed as Prime Minister in a bizarre turn of events that began just five meters from the US Embassy in Colombo.

Intelligence reports suggest that ‘Operation Mahinda’ was a classic false-flag operation by the Americans, to rid Sri Lanka of her froward Prime Minister who had refused to budge to make room for Wickramasinghe, the IMF and the MCC.

Although Black Monday was successful in dislodging a major impediment to US policy in Sri Lanka, the plan to do a ‘Gaddafi’ on the charismatic Prime Minister, failed.

The speed of the unfolding drama was not lost on President Rajapakse; he colluded with matching alacrity and surprised nearly everyone, especially Government Parliamentarians, with his controversial selection of Wickramasinghe as his Prime Minister.

Wickramasinghe is an unrepentant American apologist who has pledged to be an active partner of the US in its ‘Pivot-to-Asia’ strategy; his policies are at variance with the policies of the current government, clearly enunciated in its Election manifesto of 2019, which ensured the Rajapakses an overwhelming majority in parliament.

Senior politicians assert that the President’s rationale in choosing Wickramasinghe is flawed and violates Article 43 (3) of the Constitution.

These politicians deride President Rajapakse’s view that Wickramasinghe is the person most likely to command the confidence of the 225-member assembly which paradoxically is dominated by the President’s own Party.

It is ironic that Wickramasinghe is the lone member of his Party in parliament, having suffered the ignominy of not being able to secure even his own seat; 54 members of his party, openly expressing their lack of confidence in the man, secured parliamentary seats at the General Elections after defecting from Wickramasinghe’s Party and contesting under their own banner.

Wickramasinghe made a sneak entry into parliament, through the National List.

If the parliamentarians had any plans to challenge the President’s selection of Wickramasinghe as PM, they were squashed by the terror unleashed on Black Monday.

With the breakdown of the State’s Intelligence and Security apparatus, the law-makers were petrified with fear; para-military mobs were allowed to roam untethered on the streets, unleashing violence and terror in their wake; unbridled anarchy reigned supreme; the entire county was set ablaze.

The President, responsible for the security of the Country and the personal safety of her citizens, failed very badly.

Organised groups of hoodlums, working on carefully choreographed patterns of arson and destruction, unleashed terror with military precision on the country’s Legislators, torching their properties, lynching some and attempting to create a ‘Gaddafi’ style scenario in Sri Lanka.

The Parliament which should reflect the sovereign voice of the people, communicated through the democratic exercise of their franchise, reflects today the anarchical voice of terror projected at ‘Galle Face’; Wickramasinghe has been appointed as the de facto leader of the ‘Pohottuwa’ government.

It was only two and a half years ago when Wickramasinghe, with his Americentric policies, was booted out of office by the people; the American apologist was, at the time, on the verge of signing the ‘MCC Compact’, one of the crucial components in Operation ‘Pivot-to-Asia’. It was only public outrage that prevented Wickramasinghe signing the Compact; it had seemed that the bygone election was Wickramasinghe’s swan song.

That, was to disregard the many options the Americans had in their arsenal to destabilise and take control of Sri Lanka.

What happened on Black Monday was a coup d’état in which an American votary, rejected by the people, was installed as the Prime Minister with callous disregard to democracy, the Constitution and the sovereign will of the people.

Analysts say that with a conniving Executive and a terrorised Legislature, the Americans have seized control of this strategic Island; only the Judiciary remains, to be completely broken down.

Wickramasinghe publicly asserted that he would be changing the policies which brought President Rajapakse into power; he has already initiated measures in that direction. “Are the decisions taken and policies implemented by a government brought into power by a Coup and sustained by a Legislature frozen by terror, valid?” This is the question on the lips of ordinary Sri Lankans.

They also ask, “Could these policies and decisions be challenged and overturned when Democracy and Constitutionality are restored in Sri Lanka?”

Observers say that Black Monday has the hallmarks of the Ukrainian Coup of 20th Feb 2014, when the US executed a false-flag operation and stage-managed events to undemocratically unseat a democratically elected President and to thereafter unconstitutionally change the Constitution of the country, placing in power an American apologist.

There is commonality between what happened in Ukraine and the events in Sri Lanka; America’s F-bomb, Victoria Nuland, was here in Sri Lanka too.

Some questions are being asked. “Are, unknown to Sri Lanka, para-military units being trained in urban warfare?”

Like in Ukraine, is the 33rd Brigade from Illinois involved in training elements like the 43rd Brigade?”