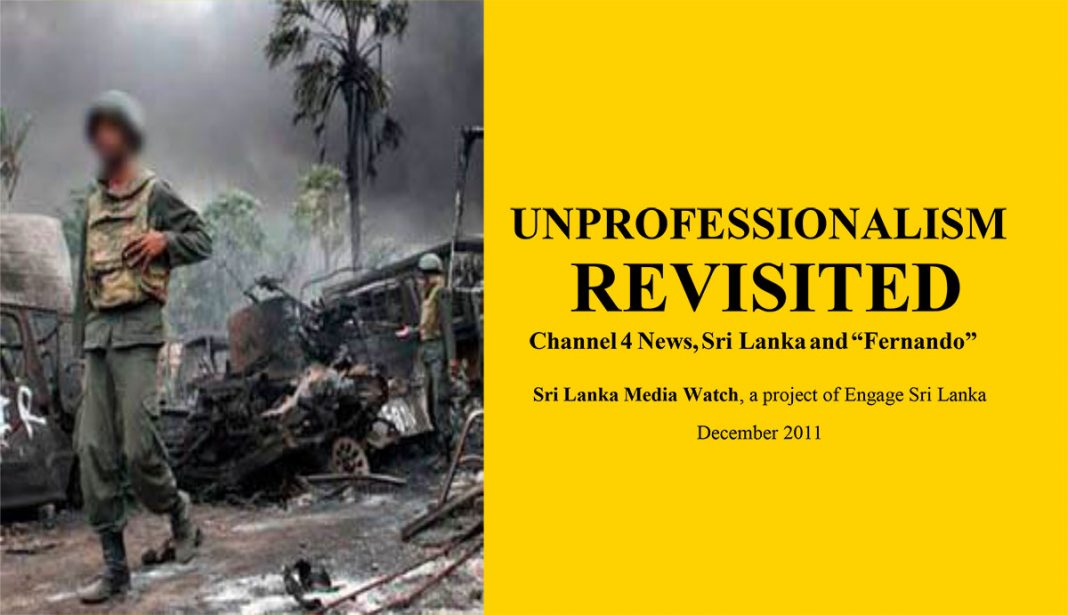 On 27 July 2011, Channel 4 News screened a programme in which they claimed to have testimony from an eyewitness, “Fernando”, who said he had seen systematic war crimes committed by Sri Lankan soldiers in the final stages of the 26 year-long civil war between the Sri Lankan government and the Liberation Tigers of Tamil Eelam (LTTE, also known as the “Tamil Tigers”). Channel 4 claimed that “Fernando”, who as usual for Channel 4 allegations about Sri Lanka was unidentified and disguised, was operating with Sri Lanka’s 58th Division during the final assaults in question. Channel 4 News claimed that he said “men, women, and children were actively targeted with small arms by government forces”.

Channel 4 reported him as stating:

When I look at it as an outsider I think they’re simply brutal beasts. Their hearts are like that of animals, with no sense of humanity. They shoot people at random, stab people, rape them, cut their tongues out, cut women’s breasts off. I have witnessed all this with my own eyes. I have seen small children laying dead. I saw a lot of small children, who were so innocent, getting killed in large numbers. A large number of elders were also killed. They were shooting when a large number of civilians were crossing through a lagoon, including women and children. The soldiers were shooting at them.

Channel 4 has already alleged that government forces deliberately shelled civilians in the final months of the war, claims rejected by the government. Channel 4 states that the “Fernando” testimony is believed to be the first eyewitness account to suggest civilians were actively targeted by troops on the ground, a claim the Sri Lankan government also denies. “Fernando” claimed troops were allowed to act with impunity. Channel 4’s “Fernando” claimed that Sri Lankan soldiers had turned into “vampires”:

For the soldiers at the battlefront, their hearts had turned to stone. Having seen blood, killings and death for so long, they had lost their sense of humanity. I would say they had turned into vampires.

“Fernando” claimed that these inhumane acts extended to acts of torture and mutilation: “I saw the naked dead bodies of women without heads and other parts of their bodies. I saw a mother and child dead and the child’s body was without its head.”

A very different picture of the Sri Lankan army and its behaviour on the ground in the last few weeks and days of the war is provided by Gordon Weiss, a former UN spokesman in Sri Lanka, and author of The Cage: The Fight for Sri Lanka and the Last Days of the Tamil Tigers, a controversial, anti-government, view of the last few months of the war. Weiss is clearly no friend of the government. Weiss has been presented by Channel 4 as a credible commentator on Sri Lanka, and especially the final phase of the war. He was interviewed extensively on Channel 4’s June 2011 programme, “Sri Lanka’s Killing Fields”, making eight separate appearances.

It is a simple fact, albeit one possibly not totally acknowledged or even realised by Channel 4, that the LTTE and its supporters have a particularly active and well-honed propaganda machine, rooted within the Tamil diaspora. A western intelligence service has noted that “[t]he LTTE international propaganda war is conducted at an extremely sophisticated level.” In “The Sri Lankan soldiers ‘whose hearts turned to stone’”, it appears that Channel 4 was spoon-fed, and accepted at face value, questionable claims without even the most basic of fact checking. A basic check would have been to evaluate the claims made by “Fernando” against the observations of Weiss, as outlined in his book covering the same events. This was not the first time Channel 4 had accepted and broadcast what could easily be described as semi-digested propaganda: