Unilever & the Corporate Hijacking of the UN 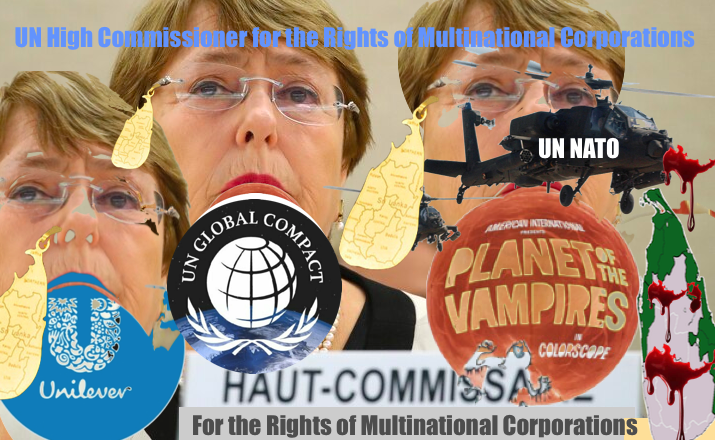 • The EU is demanding a timeline on Sri Lanka’s rather mild ‘import ban’. How quaint they even ask such questions! May we ask how long they will oppose the modern industrialization of Sri Lanka?

All these demands are prelude to the snow job in Geneva. Indeed, Sri Lanka’s daring response to this warfare should be an unveiling of a 5, 10 and 50-year industrial plan… for renaissance.

Check out these hilarious claims by this EU Ambassador to SL this week, saying they’re not a major military superpower but a ‘lifestyle superpower’ who know how to live well!: “And we live very well for many reasons.” What are those ‘many reasons’? Genocide, chattel slavery, imperialism?

Then there are the shows of ‘generosity’: Canada this week promised ‘One million DOLLARS’ (their emphasis) to fund school food programs. This imperialist tactic uses ‘aid’ and ‘philanthropy’ to pre-empt local agricultural and industrial initiatives by the state itself… So they can keep portraying us as beggars who cannot feed our own children! Who will all these dollars buy?

Annan’s father was a Unilever ‘executive’, chairman of Ghana International Bank, and governor of Ashanti Province. The origins of Unilever and the Annans may be traced to the coastal Fante people who once aided the English Merchant Companies waging wars against the Ashanti, to grab the ‘Gold Coast’.

The English African Company of Merchants, set up in 1750 under The African Company Act, arose out of the Royal African Co set up in 1660 by City of London merchants and the Stuart monarchy to wage war on West Africa. The RAC shipped more African slaves to the Americas than any other institution in the history of the Atlantic slave trade.

• It is no surprise that Unilever, with origins in slavery & the plantation system, is one of the key actors behind the attempt to further undermine the independence of Sri Lanka. They also aim to destroy the UN by weaponizing it against the nations of the world.

The UN started off as a primarily white supremacist organization. Multinational corporations, and the countries representing their interests, keep undermining the long-overdue democratization of the UN. Despite claims to democracy, they do not wish representatives of the majority of the peoples of the world determining policy. Instead they want to continue the domination of the UN by a capitalist white minority. The lament about the corruption of elected ’politicians’ is a key component of that campaign. Eradicating Unilever’s unelected exploitation is not on the agenda.

No surprise then that Unilever’s origins trace to chattel slavery, one of greatest crimes against the people of the world. And even less of a surprise that Unilever controls the ‘mass’ media in this country, especially through their PR and advertising agencies.

Most important of all: Unilever controls SL’s home market, continuing the domination of the colonial import-export plantation oligarchy. The rural home market, in particular, is vital to modern industrialization.

• No UN Human Rights Inquiries into Corporations – In 1992, under pressure from the US, the UN abolished the UN Center on Transnational Corporations (UNCTC) originally set up in 1975 for countries to effectively challenge investments by large corporations. The UN reduced it to a unit of their Conference on Trade and Development (UNCTAD), to instead promote corporate penetration.

The US government continued to refuse to pay the billions it owed the UN. The UN in June 1999 then said it was impelled to secretly plan and launch public collaboration with multinational corporations, through the United Nations Development Programme (UNDP), one of its most important UN agencies,.

This UNDP plan was publicly greenwashed as the Global Sustainable Development Facility (GSDF)–2B2M: 2 Billion People to the Market by 2020 (no Wiki reference to this outfit!). Kadayta geniyanna, thamai!

11 huge corporations paid US$50,000 each to be listed as GSDF sponsors. In turn, the UNDP whitewashed these MNCs, who got unprecedented access to its country offices, high-level governmental contacts and brand reputation. Slowly infiltrating other UN agencies, by and large staffed by whites and a few off-whites.

• They disabled the UN International Labor Organization’s review & complaints procedure, linked to the Tripartite Declaration of Principles Concerning Multinational Enterprises and Social Policy Instruments, adopted in 1977. Citing the need ‘to respond to new economic realities’, the UN Subcommission on the Promotion & Protection of Human Rights, of the Norms on the Responsibilities of TNCs & other Business Enterprises with Regard to Human Rights, was undermined by the UN Secretary-General’s Special Representative on Business and Human Rights. He pronounced in 2006, the ‘norms’ were ‘a distraction’ and that institutional reform should pursue ‘principled pragmatism’. So what about such pragmatism for nation states who constitute the UN?

This is just the preview of this week’s edition of E-Con E-News. Check out the full post @ www.eesrilanka.wordpress.com