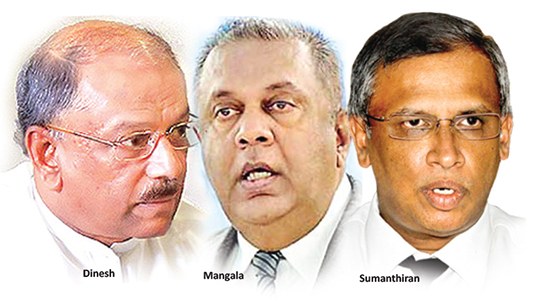 During the recent committee state debates in Parliament on the financial vote of the Ministry of Foreign Relations, exception was taken by MP M. A. Sumanthiran for the decision the by the government to withdraw from co-sponsorship of Resolution 30/1 via 40/1, and went on to warn the government of inevitable consequences for withdrawing from international commitments.

Certainly, there are consequences if a sovereign State withdraws from international commitments on some whimsical pretext. In order to prevent such outcomes, the international community has developed international laws to discourage States from acting irresponsibly. If such restrictions do not exist, any accredited Officer of a State could jeopardize the interests of his State by undertaking commitments without following or even in contravention of internally formulated procedures of the State concerned. Under such circumstances, the international law provides for sovereign States to withdraw from commitments made by irresponsible members of such a State under provisions of Article 46 of the 1969 Vienna Convention on the Law of Treaties.

VIOLATION of DUE PROCESS

During the course of his address to the Human Rights Council on February 26, 2020, Sri Lanka’s Minister of Foreign Relations Dinesh Gunawardena stated: “Procedurally, in co-sponsoring Resolution 30/1, the previous government violated all democratic principles of governance – it declared support for the resolution even before the draft text was presented – it sought no Cabinet approval to bind the country to deliver on the dictates of an international body – there was no reference to Parliament on the process, undertakings and repercussions of such co-sponsorship – more importantly the Resolution itself included provisions which are undeliverable due to its inherent illegality, being in violation of the constitution, the supreme law of the country”.

The draft text referred to above is reported to have been prepared in the USA. As for the final text, former Minister Mangala Samaraweera is reported to have admitted that “the final text of the resolution was largely negotiated over the telephone with the President … the Prime Minister … and the Ambassador of the US and the High Commissioner of the UK.” (The Island, February 29, 2020). One cannot expect the latter two participants involved in the “negotiations” finalizing the draft to be aware of the impact of their deliberations on Sri Lanka’s Constitution, or whether any of its provisions were “deliverable”. On the other hand, the others who participated in finalizing the draft had done so regardless of its impact on the Constitution, without any heed to the oath they had taken to “uphold and defend the Constitution”. What fate awaits them for their treachery only time will tell” (The Island, “Fundamental Rights, Human Rights and other rights”, March 4, 2020).

If international law did not protect sovereign States from commitments made by treacherous and unscrupulous individuals the entire international order would be in chaos. It is to prevent such disaster that the international community incorporated Article 46 in the text of the Vienna Convention on the Law of Treaties 1969. Despite this provision, for some to keep repeating that international commitments should be upheld no matter the circumstances under which the commitment was made, calls into question the scruples of the individuals concerned.

Article 46 states: “A State may not invoke the fact that its consent to be bound by a treaty has been expressed in violation of a provision of its internal law regarding competence to conclude treaties as invalidating its consent unless that violation was manifest and concerned a rule of its internal law of fundamental importance”. Thus, since a Constitution is the most basic of a State’s “internal law of fundamental importance”, a State has the grounds to invalidate its commitments whether to the UNHRC or any other. Although this depends on whether a Resolution of the UN Human Rights Council reaches the status of a Treaty or not, no sovereign State should be expected to fulfill any commitment undertaken in violation of its Constitution since it forms the law of “fundamental importance” of its Peoples.

The fact that the infamous resolution that was co-sponsored by Sri Lanka violated Sri Lanka’s Constitution was conveyed in unambiguous terms to the Human Rights Council in March 2019 by the then Foreign Minister Tilak Marapana.

In the course of his statement he stated: “In referring to para 68 (C) of the OHCHR Report (A/HRC/40/23), which pertains to the Recommendations to GOSL, ‘to adopt legislation establishing a hybrid court to investigate allegation of violating and abuses of international law and violations of international humanitarian law’, I wish to make it clear that our position on this matter is as follows’:

“The Government of Sri Lanka at the highest political levels, has both publicly and in discussions with the present and former High Commissioner for Human Rights and other interlocutors, explained the constitutional and legal challenges that preclude it from including non-citizens in its judicial processes. It has been explained that if non-citizen judges are to be appointed in such a process, it will not be possible without an amendment to the Constitution by 2/3 of members of the Parliament voting in favour and also the approval of the people at a referendum”.

Having co-sponsored the UNHRC Resolution in 2015, the Consultation Task Force on Reconciliation Mechanisms appointed in January 2016 by the then Prime Minister also recommended a hybrid Court as stated in paragraph 24 cited below.

Considering the legal and academic background of the persons who were involved in the Task Force it is a matter of deep concern that they too recommended mechanisms, either unaware or despite being aware, that the mechanisms involve serious constitutional and legal challenges. The image projected internationally by such irresponsibility reflects poorly on the country.

Under the circumstances, the only option open to any responsible government is to withdraw from undertakings that had been made by irresponsible persons who unwittingly or knowingly committed the country to fulfilling obligations that violate the country’s internal laws of fundamental importance.

The material presented above is not a lesson on international law. It is a lesson nevertheless that responsible persons should be aware of whether in Parliament or outside. The lesson is that although sovereign States are obligated to meet international commitments made on behalf of the State, international law also provides for States to withdraw from such obligations whenever commitments made by irresponsible persons impact on the “internal law of fundamental importance”. Such relief is provided in the Vienna Convention on the Law of Treaties 1969. If such provisions do not exist in international law, unscrupulous persons would be able to commit sovereign States to undertakings that would work against the interests of the State concerned.

However, a new lesson was introduced by Mr. Sumanthiran during the committee stage debates in Parliament. His lesson in history was that there were three kingdoms in the island and each of them fell at different times to the Western powers. If the reason for bring up such an issue was with the expectation that the national question should be based on historical underpinnings, claimants of other kingdoms would insist on going back to long periods of history when the island was a single kingdom for millennia. The lesson to be learnt is that such claims defy pragmatic realism. Therefore, the hope for all concerned is to improve on the institutions and practices, and continue with the political and administrative arrangements for a single sovereign State that were introduced by the West. To hope for anything more would only end up in mourning our dead.