‘Diplomatic’ forays into the North and East

UNHRC/BASL – What about the Human Rights of CJ Mohan Pieris? 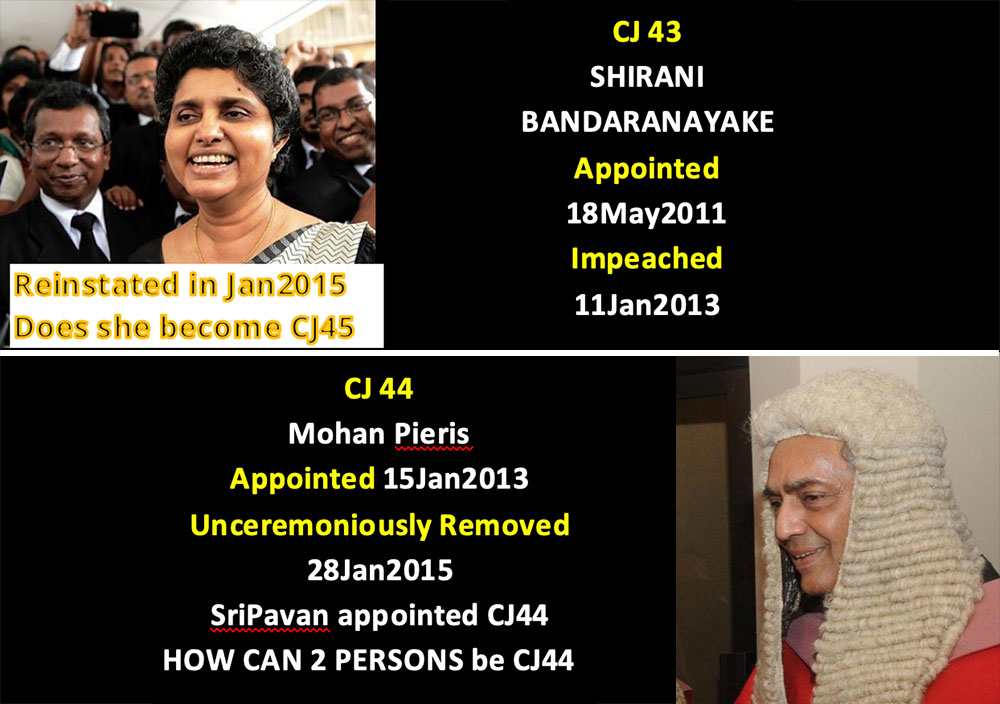 Whether anyone likes or dislikes Mohan Pieris is irrelevant. If due process was alleged to be denied to CJ43 Shirani Bandaranaike, was due process applied to CJ44 Mohan Pieris. This is the question and the response must be based on principled facts. If entities like UNHRC and BASL took up the case of CJ Shirani Bandaranaike, why did they not do the same for Mohan Pieris? CJ Mohan Pieris was unceremoniously removed as 44th Chief Justice of Sri Lanka on 28 January 2015 by the Ranil-Sirisena led yahapalana government. His position as CJ44 was virtually deleted and he was replaced with CJ SriPavan who was appointed as CJ44.  If Shirani Bandaranaike was CJ43 while CJ Mohan Pieris was sworn in as CJ44 (Jan2013-Jan2015), how can Sri Pavan be made CJ4 thus erasing the judicial decisions served by Mohan Pieris as Chief Justice? BASL need to respond and UNHRC need to answer why they adopting biased attitudes to human rights of one ignoring the human rights of another!

The question is why not & how legally valid is the removal of CJ Mohan Pieris.

Why did the BASL defend CJ ShiraniB and not CJMohan Pieris?

Shouldn’t BASL be upholding principles/facts & the law and not their dislike for Mohan Pieris?

Evidently, the bias was the same internationally.

Leaving aside the intrusive and interfering nature of demands upon a sovereign government, the more important question is why these same entities did not issue similar statements for the unceremonious removal of CJ Mohan Pieris that saw lawyers protesting and not allowing the CJ to sit in his chambers & the President issuing a letter removing the CJ without adopting any due process whatsoever. What is the justification BASL and UNHRC et al have for this?

The same question is posed to Sri Lanka’s media, “professionals”, civil society and other self-claimed ‘human rights activists’, political commentators who kept mum about the unceremonial removal of CJ Mohan Pieris but went to town over removal of CJSHiraniB. All this only highlights & showcases all their bias.

How can there be 2 CJ’s on historical records?

We may not know the law like lawyers which is why the BASL requires to respond with legal arguments as to the legal validity behind the removal of Mohan Pieris, the legal position of CJ44 & appointments thereafter given the controversies that have ensued and the legal validity of judgements by Mohan Pieris if we are to remove his role as Chief Justice from history books and the obvious bias of BASL in their treatment of 2 Chief Justices while the UNHRC and international bodies must explain why the human rights of one is not as important as the human rights of another. What hypocrisy!

BY RAJPAL ABEYNAYAKE The problem in this part of the world is that we have had enough coronavirus, but...
Read more
Commentary

President Gotabaya Rajapaksa said that doing what is right is a serious challenge and added that despite the magnitude of the challenge,...
Read more

BY RAJPAL ABEYNAYAKE The problem in this part of the world is that we have had enough coronavirus, but...
Read more
Commentary

President Gotabaya Rajapaksa said that doing what is right is a serious challenge and added that despite the magnitude of the challenge,...
Read more
Sri Lanka BriefNews, views and analysis of Human Rights & Democratic Governance in Sri Lanka