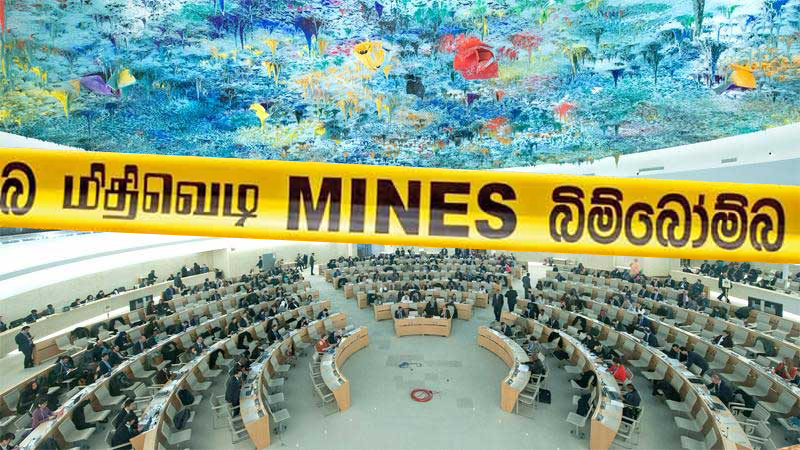 The Geneva Circus is in full swing. Well, we could also call it ‘The Carnival of Vexatious Prosecution,’ but we know that sweetness (or horror) is not embedded in name. That’s the Lesson of the Rose, if you will.

It’s not all Geneva. It’s not all international political economy. Things happen all over, global and local. Interlinked and intertwined one flavors the other, one bleeds into the other. And so we have ‘the local’ flavored by the visit of the Pakistani Prime Minister, the inimitable and much-loved cricketer in a politician’s body. Khan arrives not too long after Indo-Lanka ties have soured over the East Container Terminal, Indian worries over Chinese power projects, Indian politicians openly talking of direct interference in Sri Lankan affairs and well-timed love expressed for Tamils. In the midst of it all, India has taken a neutral position with respect to an anti-Sri Lanka resolution in the 46th sessions of the UNHRC even as it interjects it’s tired insistence on the ill-willed 13th Amendment. More on that later.

Imran Khan arrived. All of a sudden the relevant authorities decided to emend the disposal rule pertaining to Covid-19 victims, i.e. Muslims who died of virus could be buried, subject of course to strict containment protocols. The delay could have legitimately been put down to erring on the side of caution, especially in the early days of the pandemic, but its not rocket science to conclude that the risk of infection is at best no worse than in any public place as of now. The decision ought to have been taken months ago. To say, now, that it’s a coincidence is hard to swallow. Imran’s visit had something to do with it, flavored of course by India’s ugly-big-brother strutting. Imran made a polite request, Imran visited, burials we allowed and Imran is happy. Doesn’t take much to read that, does it?

So we have an Indian-Pakistani thing going here. An outfit calling itself ‘Progressive Youth Front’ had an interesting compare-contrast post in social media which goes as follows:

‘India [has] secret meetings with Tamil Eelamist politicians; Pakistan meets on with the government and opposition. India pressurizes [Sri Lanka] to concede facilities that are crucially important in terms of economy and security; Pakistan pledges support at the UNHRC. India insists in that the country should have a federal constitution; Pakistan respects the country’s territorial integrity and affirms the unitary character of the constitution. India wants to secure Sri Lanka’s key assets; Pakistan prefers bilateral understanding of arrangements beneficial to the economies of both countries.’

Let’s move to Geneva now. We are told that around 20 countries had spoken in favor of Sri Lanka’s position and 15 against in the interactive dialog on the UK-led resolution against Sri Lanka on alleged (keyword, that) human rights abuses and accountability issues. Shockingly, as Lord Naseby has pointed out, the movers (and shakers, obviously) have studiously avoided perusing the dispatches of Colonel Gash, who was attached to the British High Commission in Colombo during the period under scrutiny. Gash made no mention of anything seriously untoward having been perpetrated by the security forces.

Here’s a pertinent extract from Naseby’s speech: ‘By not providing these dispatches in un-redacted form, the British Government is hindering the process of establishing the truth of what really happened at the end of the Sri Lanka conflict.’

Not surprisingly, those who spoke against Sri Lanka included Norway, Canada, the USA, Germany and other European Union nations. Let’s interject a historical note here.

At the Berlin Conference of 1884, European nations decided how Africa would be carved up. A lot of care was taken to cut the cake in ways that split tribes, some not all being nomadic, ensuring years, decades and sometimes more than a century of conflict.

Here’s a note from an unnamed author posted in social media:

‘[In 1884] 13 European nations shamelessly gathered in Berlin to parcel out the African continent like famished school children (on a school trip) haphazardly dividing up a pizza. Great Britain was represented by Sir Edward Malet (Ambassador to the German Empire). The US, the emerging but reluctant superpower, had a delegate – the explorer Henry Morton Stanley.

‘In utter disregard and with not a single iota of conscience or concern for the culture or the families of the continent, the map was redrawn and lands claimed. What followed was the systematic scramble and undoing of Africa. Resistance was met with the brutal force of gunpowder. The Herero Massacre was the first genocide of the 20th century: tens of thousands of men, women and children were shot, starved, and tortured to death by German troops as they put down “rebellious” tribes in what is now Namibia. Tens of thousands of defenseless women and children were forced into the Kalahari desert, their wells poisoned and food supplies cut.

In Uganda, the first election fraud (in favor of Apollo Milton Obote) was masterminded by London. The British governor then, Sir Fredrick Crawford, an honest man to a fault, resigned because he was unwilling to be party to this gerrymandering. This has since become the template for regime survival. Congo and many other African nations have never recovered from this trauma that was orchestrated at Bismarck’s official residence on that bleak weekend.’

And here’s the map they drew:

Now what did they do in Africa? Well, what they did everywhere they planted a flag. The butchery, in a way, provided a blueprint for the USA, but that country, in much of the 19th century had issues with the UK.

In 1851, an American Journal  (The United States Magazine and Democratic Review), highlighted and exposed the genocidal crimes committed on the Sinhalese people in British occupied Ceylon, under the administration of the then Governor Lord Torrington. The piece ends with this telling conclusion: ‘The history of Lord Torringtons administration in Ceylon affords an epitome of English rule, wherever throughout the world, by force, or fraud, or violence, she has succeeded in planting her guilty flag.’

The Americans (of the US) at the time, feared a fate not unlike that which befell lands such as ‘Ceylon’. Here’s the rhetoric:

‘We have reproduced this Ceylon tragedy, because it contains a moral upon which it behooves the Democracy of America, at the present moment, seriously to reflect. The flag which sanctioned the massacres of the Cingalese, and has witnessed the devastation of Celtic Ireland; the flag which, usurping every advantageous commercial and political position throughout the globe, has been the harbinger everywhere of desolation and death’


The USA, having opted out of the UNHRC because it is, in their eyes, ‘a cess pool of bias’ is getting the UK to do the dirty work today. In other words, the bloody flag-baton was eventually passed on to the USA, but that’s another story. So much irony in all this!

Anyway, all this is good. When the vote is taken we will know for sure, but the speakers and the spoken tell a story about friendship and enmity.  India will stay neutral, it seems, as will Australia. In such a situation, we need to treat such countries with suspicion. It is best to put some distance between ourselves and those who vote for and/or support the resolution. Take down their names. Treat them with more than suspicion. Think ‘enemy’ for that is what is most prudent.

And we can call those who stand with us ‘friends’ for they alone are within embracing distance. Russia, China, Pakistan, Iran, Vietnam, the Maldives, Cuba, Nicaragua, Eritrea, Nepal, Cambodia, Laos, Azerbaijan, Vietnam, Belarus, North Korea, Gabon, the Philippines, Syria and Egypt stood with Sri Lanka. Let Sri Lanka remember always that they did.

So the circus will be done and come back in a year. Who knows what will ensure in the next twelve months? The text used against Sri Lanka could be used on others including the sad nations plundered by the colonial powers who would decide that they love their chains too much to break free. The world turns and in a turning world the balance of power can shift. It is shifting. The farce that is the UNHRC will one day become history. Perhaps it will take time, but until then, we could resolve to be conscious at all times about who our friends are, who the enemy is and who chose to sit on the fence.

[The author is the Director/CEO of the Hector Kobbekaduwa Agrarian Research and Training Institute. These are his personal views]