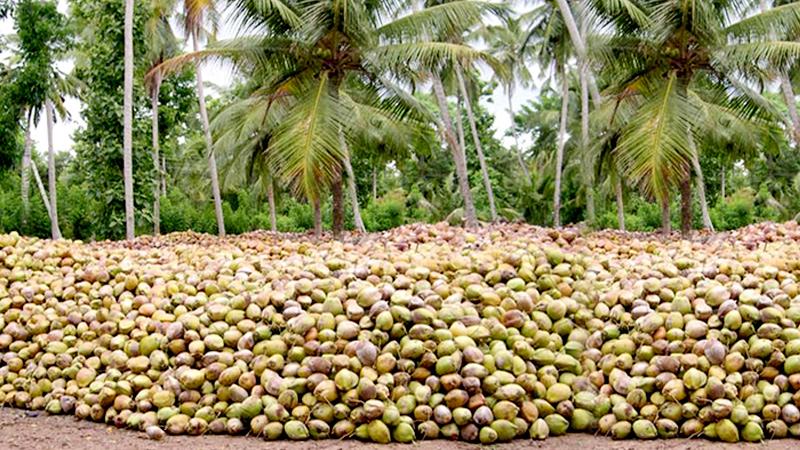 All the environmental crusaders, and the coconut oil crusaders — where were they when there was an ultra right-wing government in power from 2015, contaminating coconut oil with palm oil, allowing the denudation of Wilpattu, and permitting a drug mafia to run riot in the country?

These types of right-wing governments displaced coconut oil as the regularly used cooking oil in Sri Lankan household kitchens, and replaced the same over time with palm oil extracts in the market, under the pretext that coconut oil helped build up cholesterol.

Its regulation ultra right-wing politics that replaced governments such as Inacio Lula da Silva’s in Brazil and replaced them with right-wing rulers such as Jair Bolsarano, who had no qualms about denuding the great Amazon rainforest.

But that’s ultra right-wing politics. Replacing progressive governments with regimes that work for Multi National Corporations (MNCs), by trying to skew perceptions is their stock in trade. At present, there is the attempt to whip the people into a frenzy here in Sri Lanka over allegedly carcinogenic coconut oil. It’s almost hilarious that the campaigners in this regard ignore the fact that it was the previous UNP government that caused this situation by allowing coconut oil for the first time, to be mixed with palm oil as a market product. This government was in the process of reversing such unhealthy practices.

In the meantime, a certain consignment of coconut oil with a known carcinogenic was detected at Customs and confiscated. None of this was released to the market, but the same people that allowed the abomination of mixing palm oil with coconut oil have now turned coconut oil crusaders, ostensibly out of a concern for people’s health.

It’s probably correct to surmise that the palm oil lobby aided by the right-wing mercenaries hyped-up this story about carcinogenic coconut oil in the market. They would see that as a way to reverse gains by the coconut oil industry — and it’s a pity that we ever came to a pass in which this country of picturesque swaying coconut palms had to import coconut oil! But that was all due to right-wing indoctrination — which makes the current concern for health on the part of ultra right-wing MNC lovers shedding copious tears over the people’s health, curious to say the least.

Did they raise their voices over the go ahead given by the previous government to mix coconut oil with palm oil extracts? Where was this great concern for the collective health of the people when MNCs were advancing their agenda at the expense of the coconut oil industry? Indeed, it’s a good question as to where any of these crusaders for a healthy population were when coconut oil was insidiously being replaced with palm oil over a period of three decades or more?

In the context of how the ultra right-wing skews perceptions, it should be asked who is behind the sudden outpourings of environmental concerns on the part of various eager school children etc who never emerged out of the woodwork whenever the right-wing Wickremesinghe type administrations were in power in the last several decades?

Can the backers of an ultra right-wing government that openly voiced intentions of filling every paddy field in the country for the purpose of ‘building industry’, voice any concern about the environment with a straight face?

It didn’t take long for Wijeweera’s fire breathing revolutionary movement to be neutered in this fashion. Their tree hugging environmentalism is entirely at variance with their slavish embrace of the neo-liberal Ranil Wickremesinghe in the tenure of the Yahapalana government. Of course the JVP has been fascist for a long time, and therefore right-wing populism is smack in the middle of familiar territory for them. After all, it is the JVP that sponsors fascistic student agitation by politicising the university campuses, and that’s old hat.

Their Bolsanaro type populism needs some right-wing pinups too, which is why they induct rich children into their movement from time to time. All these Harinis and Chrysmals who provide free entertainment from the JVP ranks, are Black Label environmentalists. Their fealty to environmental causes increases with every shot of the beverage they gulp down, when they have their fun parties within the party of the Left.

All these born again environmentalists whose love for oxygen and forests manifests only when there is a progressive government in power, have no qualms about supporting the so-called international community’s moves against Sri Lanka sponsored by rich Western nations. There is an abundance of racism in these types of moves against a country that eradicated the scourge of terrorism. If someone says nations such as Nepal didn’t support Sri Lanka in its cause — which is taken to mean that cause cannot be racist — it has to be said that racism has its enablers. Why isn’t it racism when, say, for instance the UK passes legislation to make the country’s troops immune from international prosecutions, and at the same time wants to investigate Sri Lanka for war crimes? It’s racism of the sort you’d see at soccer stadiums in the football mad country which gave the world football and the term football-hooliganism.

The JVP staged strikes when the government of the time had a fight to the finish on its hands with the terrorist LTTE in 2009. Today, when there is the thinly veiled racially tinged targeting of Sri Lanka on trumped up human rights charges at the UNHRC etc, the JVP has begun tree-hugging and chanting over coconut products, furthering the right-wing MNC campaign to replace every last drop of coconut oil with unhealthy palm oil which passes off in this country as a domestic cooking ingredient.

Even Jair Bolsarano may blush seeing the right-wing populism of the JVP, a Sri Lankan party of the left which took sides with his country against Sri Lanka when the recent Human Rights Council Resolution was passed. But these people are politically kindred — Bolsarano who supports the logging of the Amazon and votes against Sri Lanka, and the JVP which displays photos of loggers of the Amazon rainforest pretending these are pictures of the Sinharaja, and then supports Brazil and other countries voting in the UNHRC against Sri Lanka. Birds of a feather, you could say …

No doubt there is news that there is a consignment of coconut oil with a carcinogenic that was recently almost smuggled through by unscrupulous importers. But the police swooped down on the illicit operation. It’s the context in which all this happened that’s important. These days, when irregularities happen, the system works, and that’s a sign of a functional government. When the UNP was in power, car engines started seizing, because a wrong grade of contaminated petrol was imported. Car exhausts began belching acrid smoke.

There was nobody from the chic environmental lobby making a song and a dance about it at that time.

It’s eerie the parallels with Brazil’s far-right Bolsarano. The chic and wealthy supported him too, and they sang the chorus when he began insulting genuine progressives such as Lula.

Now, the immensely popular and charismatic Lula da Silva is on the comeback trail. He is out of jail; the ordinary man in Brazil will not forget that he was put behind bars on trumped up charges to prevent him from contesting right-wing bigots such as Jair Bolsarano.

The point being made is that the rich and chic will always take the side of pseudo left-wing fascists such as the JVP, along with the ultra right-wing SJB to harass a progressive government, on largely trumped up issues. The coconut oil brouhaha is largely that type of ultra right-wing false flag operation, even though the core issue of a contaminated oil consignment was true, and was dealt with.

All the Jack-in-the-box environmentalists who are suddenly born again tree-huggers are also largely the chic sidekicks on hire for right-wing populists and the fascist JVP.