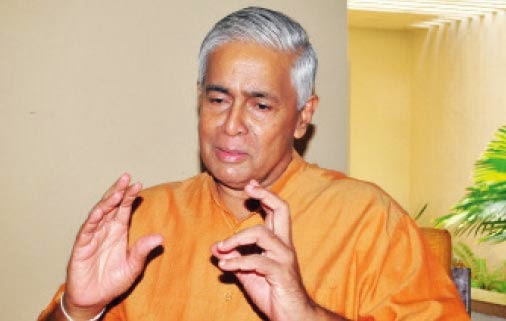 Former Chief Justice Sarath Nanda Silva (1999-2009), on Thursday (18), alleged that the British government had suppressed diplomatic cables sent by its wartime Defence Attaché Lt. Colonel Anthony Gash from the British High Commission, Colombo, because they ran counter to the claims made by the western bloc as regards Sri Lanka at the Geneva-based United Nations Human Rights Council (UNHRC).

Appearing on ‘Get Real’ on Derana 24×7, anchored by Johnney Mahieash, the 41st CJ explained the British, in spite of being a member of the UNHRC in addition to spearheading the Core Group, had no option but to suppress credible information as part of the overall strategy to sustain the campaign against Sri Lanka.

The UNHRC consists of 47 countries divided into five zones with the UK categorised along with Austria, Denmark, France, Germany, Italy, the Netherlands (Western Europe and other States). A vote on the Core Group’s resolution, backed by the US, is expected early next week at the end of the 46th session of the UNHRC on March 23. The session commenced on Feb 22.

Displaying a set of highly censored British diplomatic cables that dealt with the situation on the Vanni front in 2009 (January-May) made available by Lord Naseby, who obtained them following a protracted legal procedure, the former CJ expressed shock and dismay at the British choosing to suppress information provided by a person who enjoyed diplomatic status.

Silva said Lt. Colonel Gash had been stationed in Colombo during that period to provide information sought by the British pertaining to the conflict. Having perused the documents and examined the context in which they were written, the former CJ asserted that the Gash papers gave an accurate picture.

In an exclusive interview with The Island, in Sept 2019, Lord Naseby said that he struggled for nearly three years to secure the dispatches from the UK government after making the first formal request in Nov 2014.

Responding to another query posed by Mahieash, the former CJ questioned the rationale in the UK depriving a House of Lords member material relevant to an issue the UK government was deeply concerned about. The outspoken former CJ explained that for the British the dispatches from Colombo couldn’t have posed any security concerns though their disclosure was certainly detrimental to their Geneva agenda.

Referring to Gash dispatches again, former CJ Silva said that in spite of blackening sections of the reports from Colombo, the person assigned the task carelessly left some crucial words intact one could comprehend what had been censored.

Lord Naseby told The Island that he personally handed over sets of Gash reports to the then President Maithripala Sirisena’s administration as well as the Joint Opposition (now SLPP) in 2017. The Conservative Party politician regretted the disclosure of the vital material hadn’t been properly utilized by Sri Lanka. Lord Naseby revealed the existence of the Gash papers on Oct 12, 2017 in the House of Lords.

Comparing the LTTE with the Irish Republican Army, the former CJ pointed out the wartime British Defence Attaché’s comment on the LTTE employing foreign mercenaries to mount air attacks in Colombo and the Katunayake airbase, where Sri Lanka’s precious fighter squadrons were based at. The former CJ referred to specific reference to the LTTE targeting the Israeli supplied Kfir aircraft based at Katunayake at a crucial time of the war against the LTTE. Reference was also made to the LTTE having seven airstrips in the northern theatre of operations and its failure to use a fourth aircraft in its arsenal in the absence of a mercenary.

Sri Lanka brought the war to a successful conclusion in May 2009.

The former CJ said that another reason for the British to suppress Gash papers was that the British official officially assigned the task of keeping London informed of the developments here, presented a picture of the Sri Lankan military quite opposite to what they propagated. In the wake of Gash/Lord Naseby disclosure, the UN Panel of Experts (PoE) report based on unsubstantiated allegations was in tatters, the former CJ said.

The former CJ said that British diplomatic dispatches on the basis of UN reports explained how the LTTE deployed forcibly recruited ‘unwilling recruits’ in its desperate counter offensives as the fighting entered the final phase.

The former CJ stressed that the British should have disclosed all available information to ensure a free and fair inquiry. Sarath Nanda Silva was responding to the British declaration in February this year that they didn’t furnish Gash reports to the UNHRC nor did the Geneva body asked for them.

The former CJ alleged that the British were pursuing a politically motivated agenda. In the wake of his interview with Derana 24×7, The Island sought the former CJ’s opinion on measures that could be taken to ascertain the truth as regards the primary allegation namely the killing of 40,000 civilians (PoE, paragraph 137). The UK led Core Group which includes Germany and Canada could call for dispatches from Defence Advisors/Defence Attaches from other countries having diplomatic missions in Colombo. They could easily verify the Gash reports by comparing them with dispatches from other missions, the former CJ said, pointing out that the UN and ICRC, too, could furnish their reports.

The former CJ said that the British government actions had in fact embarrassed the ordinary people who believed in their supposed sense of justice and fair play.

The former CJ said that he was appalled by the PoE placed the number of dead at 40,000 in spite of UN report that dealt with the situation therein from August 2008 to May 13, 2009 having asserted only 7,721 perished on the Vanni front (both civilians and combatants/paragraph 134). He also pointed out the PoE declaration the unsubstantiated accusations that led to Geneva actions couldn’t be examined till 2031 (paragraph 23) revealed that due attention hadn’t been given to the high profile anti-Sri Lanka project. The PoE/UN prohibited the examination of accusations for a period of 20 years from 2011. Pointing out the discrepancy in varying figures quoted by interested parties, the former CJ said that wartime US Defence Advisor Lt. Col. Lawrence Smith’s revelation at the 2011 Colombo Defence Seminar could be utilized along with Gash reports to carefully re-examine the accusations.

The US official denied alleged war crimes, including battlefield executions, the former CJ said, pointing out that the US denial was made just a couple of months after the release of PoE report widely called the Darusman report. In fact, Geneva should have asked member states and other countries especially the US and India to provide their defence advisors’ dispatches to help its investigations. The Tamil Diaspora demanding justice never asked for those reports because all knew what would happen to politically motivated Geneva actions if the reports reached the public.

The former CJ also referred to a Wikileaks revelation that ICRC told the US in 2009 Sri Lanka military could have finished off the LTTE if the civilian factor was not taken into consideration. The bottom line is that the case against Sri Lanka had been exposed by the officials of the same countries, the former CJ said, urging the government to take a fresh look at all available information/evidence.

The former CJ told Derana 24/7 that cases shouldn’t be won by suppressing information/evidence. The former CJ further pointed out how a section of the media in early 2007 revealed the UN suppressing the LTTE detaining two UN Tamil employees for helping civilians to escape to the government controlled area. The UN acknowledged that New York was not briefed of the developments here, the former CJ said, urging those shedding crocodile tears to revisit Sri Lanka accountability issue.