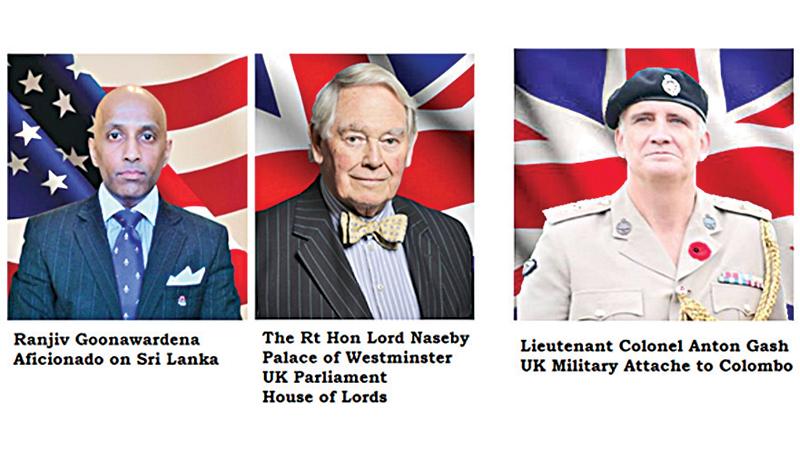 It has become apparent that the United Nations Human Rights Council (UNHRC) in Geneva did not take into consideration documents and reports which were written by Lieutenant Colonel Anton Gash who was the then military attaché on the ground in Sri Lanka and had unfettered access to the conflict zones, however, his despatches have been withheld by the UK Government.

This critical information was not transmitted to the UNHRC for consideration and neither did the UNHRC ask for the evidence and this is highly irregular because the whole purpose of the Human Rights Council is to investigate thoroughly leaving no stone unturned and most importantly without fear or favour.

Not realising this sequence of events, the 47 countries which voted on March 23 were oblivious to the fact that the UNHRC had not requested the information; neither did the UK Government provide the information, as they are the penholder of the Core Group consisting of Germany, Canada, Malawi, Montenegro and North Macedonia.

The UK government has brought the UNHRC into disrepute by withholding information and not providing it to the member nations for scrutiny.

The 22 countries which voted in favour of the UK motion need to ask further questions as to why this information has been withheld and why the documents have not been released without being censored so that it will help the UN Human Rights Council to make an informed decision.

The 14 countries which abstained also need to understand why they have been misled.

Ranjiv Goonawardena, an aficionado on Sri Lanka, said this is a great travesty of injustice to Sri Lanka and the UK Government has brought the whole proceedings in the UNHRC into disrepute by withholding critical information which would have exonerated Sri Lanka of these heinous allegations and conjecture.

Due to the above circumstances, the whole proceedings in the Human Rights Council for Sri Lanka should be deemed null and void.

It is extremely surprising that the UK Government has classified Colonel Gash’s report as Sri Lanka does not seem to be an existential threat to the United Kingdom.

So why would they censor it and deem it classified as confidential dispatches?

After nearly three years of perseverance, Lord Naseby through the use of a Freedom of Information Act was able to acquire the redacted version of some of the documents pertaining to the diplomatic despatches of Lieutenant Colonel Gash which were classified by the UK government.

Lord Naseby said that he had written to the High Commission of The Human Rights Council Michelle Bachelet and her office did not reply to his letter.

This is extremely strange as Lord Naseby has irrefutable evidence from the man on the ground in Colombo, Lieutenant Colonel Anton Gash in Her Majesty’s Government, the Military Attaché assigned to Sri Lanka in 2009 evidence which would help the UNHRC office.

Before the Resolution vote in keeping with the e-voting procedure established by the UNHCR session which was held virtually and certain countries made several statements in favour of Sri Lanka.

Venezuela reiterates its opposition to the Draft Resolution where some countries or members of this Council who for purely political grounds table initiatives such as this draft resolution L.1/Rev.1, against the Socialist Democratic Republic of Sri Lanka. Such initiatives do not enjoy the ascent of the country concerned.

They violate the principles of respect for sovereignty and non-interference in the domestic affairs of states. We are deeply troubled that the text of the Draft Resolution seeks to establish the competency of the office of the High Commissioner for Human Rights to collate criminal evidence for future judicial processes turning it into an organ of a body of criminal inquiry.

A flagrant violation of the mandate contained in resolution 48 141 of the general assembly which established the Office of the High Commissioner for Human Rights (OHCHR) in the first place.

We are also deeply alarmed by the distortion of the preventive approach as a concept preventive in terms of human rights.

That is a distorted and perverted interpretation of that goal which is further embedded in this antagonistic initiative against Sri Lanka which seeks in advance of any concrete findings to disproportionately punish alleged violations of human rights violations which never took place.

It is regrettable that the sponsors of draft resolution L.1/Rev.1 seem to have ignored the major efforts undertaken by the Government of Sri Lanka to comply with its commitments in terms of human rights.

Venezuela rejects it as baseless the interventionist attempts that are under way into the internal process being experienced by this country towards true national reconciliation.

We’d like to flank the major risk inherent in the bias draft resolutions which follow an interventionist model such as this one and is a throwback to the anachronistic practices and selective proceedings with some major powers.

South particularly those countries that will not allow the need to the whims of these global powers.

We condemn the selected nature, the politicisation and the blatant double standards in these initiatives which establish hostile mandates at the behest of those who seek to uphold murky interests of their own governments which have promoted these draft resolutions where they themselves have committed on are still committing serious human rights violations.

Yet they themselves have never been subject to similar initiatives while Sri Lanka is cooperating actively with this council and its mechanisms and with the OHCHR demonstrating a major headway made in the promotion and protection of the human rights of its people.

This draft Resolution is entirely unwarranted for which reason it should be rejected by the members of the Security Council and we call upon them all to vote against it for all of the aforementioned reasons Venezuela energetically and categorically opposes the draft Resolution L.1/Rev.1 and we will vote against.

Permanent Secretary of the Brazilian Mission Maria Luisa Escorel De Moraes said that Sri Lanka continues to cooperate in good faith and we stress that the Government’s legitimate concerns regarding key issues.

That some of the recommendations in the office’s report presented to the Council might have overstepped the mandate of a body that does not deal with peace and security issues within the UN system.