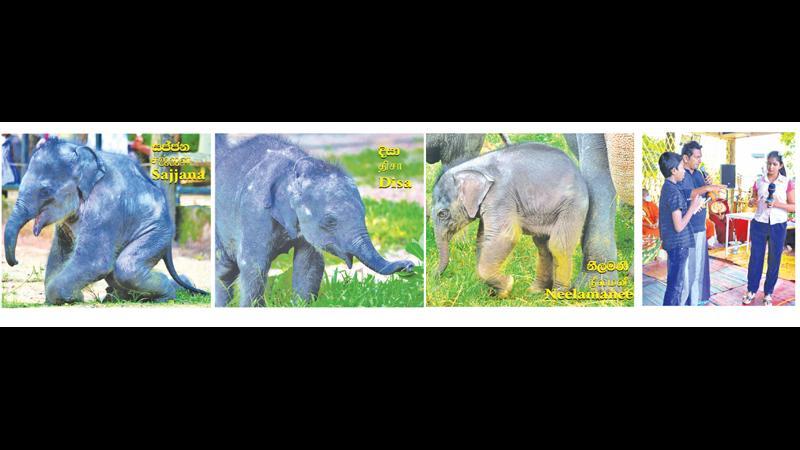 Sri Lanka is world renowned for its elephant population and many foreign tourists arrive in Sri Lanka just to see the majestic creatures up close. They are listed as endangered species and dwindling in population mainly due to deforestation and the human-elephant conflict.

A tweet by American celebrity Cher criticising the handling of elephants during an event at Pinnawala, was doing the rounds on social media recently and the Director-General responded by inviting Cher to Sri Lanka to learn more about elephants and our conservation efforts.

Cher was tweeting on a video showing the newly-born twin calves, their mother and another elephant taking a dip in Ma Oya at Pinnawala on January 6. Rajapaksa said the video had been edited and posted online by a dubious organization presenting themselves as an NGO to discredit the Government for the purpose of collecting funds for their organisation.

“This woman collects money on her personal bank account and posts regarding this are on social media. We don’t see them doing anything but criticise the Government and officials on social media,” the Director-General said.

She added that they raise funds by giving people, especially foreigners, misleading information about Sri Lanka. She alleged that they introduce themselves as fundraisers on social media profiles and this has been their livelihood.

“The woman who leads this organisation is individually attacking me because I didn’t agree to her terms on a project she proposed to me soon after I took over the subject,” Rajapaksa added.

According to Rajapaksa, she was approached by the woman barely two weeks into her appointment with a project that she did not see much benefit. She identified after background checks that it was another stunt to earn some dollars from unsuspecting foreign donors.

“She tried to introduce me to a foreigner who she said was an expert on pedicures for elephants. I requested for his resume and found that he had been a zoo-keeper in some other country. She said he charges US$ 1,000 an hour to do a pedicure but told me that this would be done free of charge in return for using the project for their propaganda and fund-raising. I didn’t want to be a part of it for many reasons,” she said.

“In Sri Lanka, we have enough experts to look after elephants and our people have done it successfully for decades. Also, she had a dodgy past where she continuously criticised Government officials for the purpose of fund raising. I was also worried that she might get sensitive information about the staff and animals with more access and use it against us for her ulterior motives. Still, I didn’t reject her proposal but told her that I will try to do a workshop for our veterinarians with the person. She wasn’t happy and started attacking me saying that I am not ready to accept support from a world-renowned expert,” Rajapaksa added.

Pinnawala has been in existence since 1974 and is now home to 76 elephants. Nine veterinarians care for the elephants along with other staffers.

“Our elephant-keepers and veterinarians are more experienced than this foreigner I was introduced to. We already do pedicures for our elephants. We also have traditional Veda Mahattayas (doctors) in Sri Lanka who know how to care for elephants. So, we don’t need foreign expertise and this particular woman is against me because I didn’t help her dollar earning project,” Rajapaksa said.

The Director-General also shot down rumours about the resumption of the elephant circus at the Dehiwala zoo. Years ago, Dehiwala zoo was popular for its elephant circus where jumbos were made to do various tricksto please crowds. These included headstands and other stunts criticised by animal rights activists as cruel and unnatural. The program stopped in 2015 and Rajapaksa said that this never resumed.

She added that the program which replaced the circus is called ‘Elephant Meet and Greet’ which is an educational program accredited by the World’s Association of Zoos and Aquariums (WAZA). Rajapaksa said the rumour was started by the same woman who runs the unscrupulous organisation.

“‘Elephant Meet and Greet’ is an educational program to create awareness among the public about elephants, their appearance and habitat, and WAZA has approved it. The Dehiwala Zoo is a member of WAZA which is a governing body to set standards, do audits and ensure that the world’s zoos are running according to international standard,” Rajapaksa said.

Even though Rajapaksa has clarified, the petition is still ongoing on the digital platform at the time of writing this article.

Although the video of the river bath uploaded by the woman in question triggered a tweet from Cher, another American celebrity Ray Fisher, has debunked this accusation tweeting: “the twins are getting used to the water pit. It clearly says that in the video. Out of context caption ya’ll put on here for clout. And the twins are not even captured. Get your facts straight!”

Referring to the video, the Director-General said: “In one instance, the mother was trying to go towards the hotel instead of the river. So, the animal keeper pulled her ear for it to turn. The so-called ‘animal activists’ edited out this part and started circulating it calling it animal cruelty. We didn’t drag the elephants to the water, and chains and bull hooks were not used. The elephant handlers used only a stick. This was a huge achievement for us. The so-called ‘animal rights activists’ spread misleading information that we are separating the babies from their mother and some unrelated story,” the Director-General said.

With regard to the pulling of the ear, Rajapaksa clarified that an elephant keeper would do this to indicate it to turn to a side, similar to using certain techniques when riding a horse. If this is termed as cruelty, horse riding should also be banned. Elephant mastery has been in existence in Sri Lanka from the 2nd century BC and Rajapaksa intends to do a series of sessions with experts to educate the public on the art of communicating with elephants and creating more awareness on the surrounding issues. She also invited Cher to Sri Lanka to learn more about the jumbos and support in Sri Lanka’s efforts to care for elephants and in mitigating the human-elephant conflict.

“At Pinnawala, we have bull elephants at musth or in their mating season and they become very aggressive. During this time, we have to keep them chained as we don’t have facilities to let them loose. But we have acquired a 17-acre land at Pinnawala to build a musth elephant facility with 10 pens for bull elephants to go through this period without chains. It costs about Rs.250 million.

We also need to address the human-elephant conflict. The ministry has planned to build a 1,500km electric fence estimated to cost Rs.1500 million. I invite Cher to come to Sri Lanka and help us raise this money. I invite social media users to use the hashtag #invitechertosl. Cher is an influential celebrity and hope she would extend us the support,” Rajapaksa said.

The three calves born at Pinnawala were named Disa, Sanjjana and Neelamani at the ceremony held on Wednesday (12). It was the first time that such a traditional naming ceremony was held at the orphanage. Rituals included warding off the evil eye and the bhikkhus showered blessing upon the newborns. The calves are special to Pinnawala as the orphanage had not seen a jumbo birth since 2015.

The majestic jumbos have always taken centre stage in Sri Lankan culture and religion, and conserving them is a means of protecting our way of life too. While we invoke blessings upon the babies, it is the fervent wish of genuine animal lovers not to let this cultural symbol dwindle into oblivion or be used by others for personal gains.