To bury or not bury is NOT the question 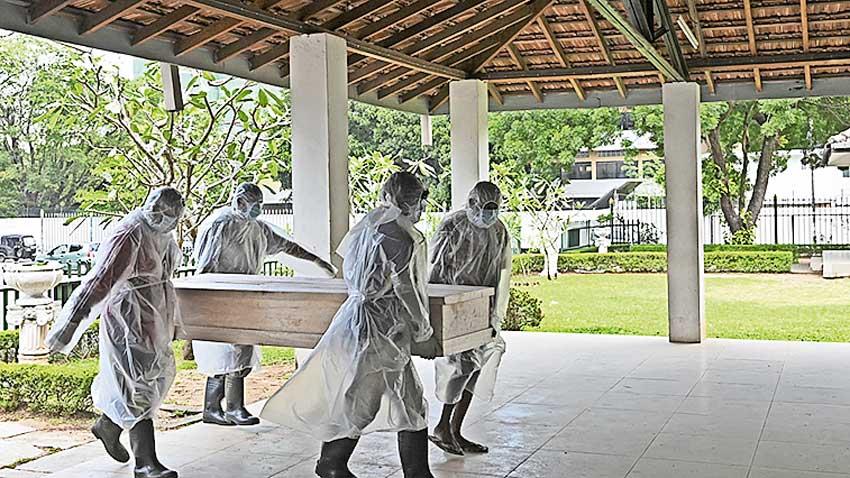 Is it absolutely safe to bury those who have died of COVID-19? No one can say with absolute certainty. The World Health Organization (WHO) says it’s safe. However, the WHO’s endorsement is not the last word. It is a decent recommendation, nothing more. Note also, the WHO has got a lot of things wrong over the years. With regard to COVID-19, the WHO initially said face masks are unnecessary. Later the WHO said, ‘Wear face masks.’  That’s symptomatic of all understanding of and responses to the pandemic. We know just one thing and that is that we don’t know much.

That said, some 190 countries have approved burials. THAT said there is massive outcry in Denmark for the exhumation and incineration of nearly 17 million mink culled and buried after the discovery of a mutated form of the virus. The burial sites are close to a bathing lake and to a drinking water source. The burial was deemed illegal. However, ‘as of now’ (note: this is a key phrase in the COVID-19 discourse), there’s no evidence of contamination or risk of infection. The important thing here is perception. PUBLIC perception.

Muslims want the COVID-dead buried. Islam is not the only Abrahamic religion that recommends burial, but others in this faith-family have not complained. Flag that. THAT said, the opinions, fears and beliefs of those who belong to other faith communities are irrelevant for the individual. He/she operates on the basis of his/her understanding of the particular faith.

Atalugama is a case in point. A total 162 COVID-19 cases were reported from this village on Tuesday alone. This is a ‘Muslim village.’ The people are fighting shy of tests because they do not want to be tested positive. If tested positive they are reluctant to be taken to hospital. If taken to hospital they are scared they will die. Why? Because, under the current policy, the remains will be cremated and if cremated, so they fervently believe, the possibility of rising to heaven will be denied. Work that backwards and we have the ‘Atalugama Phenomenon’.

For those whose lives are governed by faith, human logic is inferior, irreverent and irrelevant. If you tell those who believe that corporeal integrity is a must for entry to heaven, that disintegration begins at the point of death, they will not bother to even respond. That’s the way of faith.

Muslim citizens have a right to follow their religion. This is ensured in the Constitution (see Articles 10 and 14). On the other hand, all citizens need to abide by the laws and regulations of the land.  Governments have to be sensitive to the anxieties of all communities, and where there are conflicts, should go with the law. Governments cannot wait on divine arbitration, but must draw from the opinions of the relevant experts.

Muslim citizens have a right to follow their religion. This is ensured in the Constitution (see Articles 10 and 14). On the other hand, all citizens need to abide by the laws and regulations of the land

The other day, some well-meaning people (no doubt) tied white ribbons to the fence around the Borella Cemetery as a mark of both empathy and indignation; supporting their Muslim brethren over their burial demand and protesting the cremation of a 20-day old baby from a Muslim family who died of COVID-19. A baby’s death moves more than the death of an old person, obviously, but the fact of the matter here is whether the deceased is 20 days old, 200 days old or 200 years old is irrelevant. The issue is that the protocols in place forbid burial.

There was much mischief in social media over this particular case. Here’s what happened. The baby was brought to the Lady Ridgeway Hospital (LRH) in a critical condition. In other words, ‘late’. That’s not the hospital’s responsibility; perhaps the parents were immobilized by the anxieties mentioned above. The antigen test was carried out at the preliminary care unit itself, and the test became positive within minutes (as opposed to the usual 20-30 minutes) due to the very high viral load.

The doctors and the rest of the staff battled at great risk to themselves. They could not save the baby. The parents were reluctant to receive the body.  The anti-burial lobby, motivated less by empathy with the Muslims but by a rabid determination to badmouth the Government (probably on account of ideal political outcomes not materializing), went to town on social media. That is the story, in a nutshell, of the white ribbons.

The Government, by way of a solution to the burial-cremation issue, has negotiated with the Maldivian Government to bury Muslims who fall victim to COVID-19 in that country.  The intact-requirement would thus be satisfied, and so too the anxieties of those who are worried about water contamination.

Well, Lord Almighty, all of a sudden those who pooh-pooh the laws of humankind because they believe in those of a higher authority have become fanatical patriots! They insist, ‘We want to be buried in our motherland!’ So, it’s the Kingdom of God and things spiritual at one point and at another the land of birth. They want human-laws to be overruled by ‘god’s laws’ in the name of religious freedom. Fine, someone listens, is sensitive and offers a solution.

Not good enough, but not for god but the particular human. All of a sudden he/she talks of land, country and nation, and goes further, ‘MOTHERLAND!’ So it’s not about god, the one entity that needs to be pleased as per faith, they want to quarrel over non-religious issues as well. In other words, they WANT to quarrel. They are spoiling for a fight.

What’s next? Well, something that happened in the country which has the largest number of Muslims—Indonesia—will no doubt happen here. The demand for halal vaccines.

Those who claim to represent Muslims and their rights need to do a hard re-think about their politics. They could also re-read their doctrinal texts. They could reflect on those sections where the prophet speaks of lands, citizenships and responsibilities thereto. They might discover that a true Muslim is required to fully abide by the laws of the land of which he/she is a subject. A Muslim is required to obey Allah, his messenger and those who are in authority over him/her.

Now someone might say ‘that’s selective quoting.’ Could be. On the other hand, selectivity is an integral part of human affairs. You can’t have it both ways. You can’t say ‘God’ when it suits you and insist ‘human’ when that’s what is convenient. You can’t say ‘scientists say burial is safe’ and refuse to subject faith to scientific investigation.
To bury or not bury IS a question.  It is not THE question. If it is an important question (and I believe it is), then as important are the question about religion and science and the question of selectivity (related to God’s Kingdom and the Nation, divine directives and those that are human-made).

They say you can’t have the cake and eat it. Well, certain Muslim ‘leaders’/‘representatives’ are proving that it is possible!