TNA gets it wrong 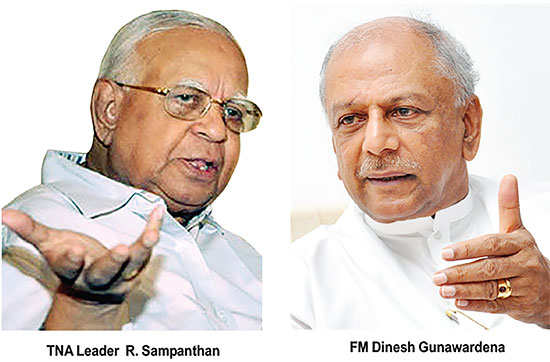 A report in The Island of March 8, 2021, referring to a statement made by the Tamil National Alliance (TNA) relating to Foreign Minister Dinesh Gunawardena’s UNHRC speech, states: “Sri Lanka has not conducted any investigations to ascertain the truth and dispense justice. Anything done to ascertain the truth has been through the investigations highlighted in the PoE Report of March 2011, or the OISL Report of September 2015. No steps have been taken to dispense justice even on the basis of the said investigations”.

The notion that the UNSG appointed Panel of Experts (PoE) conducted investigations to “ascertain the truth” is incorrect, by the admission made in the Executive Summary of the Report by the PoE.

The Executive Summary of Report by the PoE states: “The Panel’s mandate however does not extend to fact-finding or investigation. The Panel analyzed information from a variety of sources in order to characterize the extent of the allegations, assess which of the allegations are credible, based on the information at hand, and appraise them legally. The Panel determined an allegation to be credible if there was a reasonable basis to believe that the underlying act or event occurred…. Allegations are considered as credible in this report only when based on primary sources that the Panel deemed relevant and trustworthy. In its legal assessment the Panel proceeded from the long-settled premise of international law that during and armed conflict such as that in Sri Lanka, both international humanitarian law and international human rights law are applicable. The Panel applied the rules of International humanitarian and human rights law to the credible allegations involving both of the primary actors in the war, that is the Liberation of Tamil Eelam (LTTE) and the Government of Sri Lanka”.

Having stated in the Executive Summary that the applicability of both international humanitarian and human rights laws during an armed conflict is based on the “long-settled premise of international law, the PoE in the body of its Report states: “There is no doubt that an internal armed conflict was being waged in Sri Lanka with the requisite intensity during the period that the Panel examined. As a result, international humanitarian law is the law against which to measure the conduct of both government and the LTTE”. It is therefore clear that as far as the PoE is concerned, the only applicable law should be International Humanitarian Law, notwithstanding the “long settled premise” that both IHL and IHRL apply during an armed conflict.

The TNA statement also refers to “investigations highlighted” in the OISL Report.

According to their Report, the “OISL’s mandate derives from Human Rights Council Resolution 25/1 which required OHCHR to ‘undertake a comprehensive investigation into alleged serious violations and abuses of human rights and related crimes by both parties in Sri Lanka …” (Paragraph 4)

Despite the mandate being to “undertake a comprehensive investigation” the Methodology used was ONLY a desk review of existing information as stated in Paragraph 20 of the OISL Report.

Paragraph 20: “In view of the extensive documentation already available on the period covered by the OISL investigation the team initially carried out a desk review of existing material including Government publications, international and Sri Lankan NGO’s/civil society reports, the report of LLRC and other commissions, audio-visual material and satellite images, reports of the United Nations Special Procedures and treaty bodies”.

Paragraph 21: “In the course of its work, OISL has received and gathered information from many sources with knowledge of human rights cases and issues in Sri Lanka, including parties to the conflict, as well as United Nations officials and staff members, civil society organizations, forensic medical doctors, international NGOs, human rights defenders and other professionals….”

Paragraph 22: “Another key source of information was the United Nations Secretary General’s Panel of Experts… As custodian of the Panel’s archives, the High Commissioner officially authorized OISL to access the documentation contained in the archives, requiring it to adhere strictly to confidentiality guidelines….”.

Paragraph 25: “Details which could reveal the identity of victims or witnesses such as names, dates and places have been omitted in many cases described in the report in order to ensure that the victims, witnesses and their families cannot be identified”.

It is therefore abundantly clear from the foregoing admissions that both the PoE and the Office of the High Commissioner did NOT undertake any investigations of a nature that would enable establishing the truth in order to dispense justice. All that they did was to “gather information” (Paragraph 21) and do a “desk review” (Paragraph 20) of existing statements. However, the authenticity of these recorded statements cannot be verified because “the identity of victims or witnesses such as names, dates and places have been omitted” for reasons of confidentiality (Paragraph 25). In such a background, for the TNA to state that “No steps have been taken to dispense justice even on the basis of the said investigations” is to lay charges without understanding the limited methodologies adopted by PoE and the OISL.

The stark reality is that both the UNSG appointed Panel of Experts and the Office of the High Commissioner for Human Rights by their own admissions did NOT carry out “investigations” of any kind to ascertain the truth. Instead, what both did was to record statements from so called “primary sources” and characterize those allegations that “the Panel deemed relevant and trustworthy”, as being credible. The fact that the approach adopted by both parties is highly subjective is not in doubt, and because of it, establishing the truth requires investigations. Such investigations should entail having to engage with the victims and witnesses who provided the material on which the allegations were based. Since such engagements are not possible due to non-disclosure of identity of victims and witnesses on grounds of confidentiality under Paragraph 25 cited above, the investigations needed to establish the truth cannot be conducted.

In such a background, it is next to impossible to establish the truth because even if access to the recorded statements and other material, which at present is accessible only to the UNHRC, verifying its authenticity is not possible due to the inability to engage with the victims and/or the witnesses for reasons of confidentiality. Under the circumstances, Sri Lanka cannot be held solely responsible for establishing the truth. Instead, it becomes a joint responsibility because the reason for the persistent lack of accountability that Sri Lanka is being charged with is because of the constraints imposed on the process by the High Commissioner for Human Rights, by way of not having access to the evidence and the primary sources of that evidence, without which it would NOT be possible to engage in an investigation that reaches the threshold of accountability. For the core-group to comment on the “persistent lack of accountability of domestic mechanisms”, reflects a refusal to appreciate what is at stake in respect of the challenges involved as a result of a imposed constraints.

The challenge is that an impartial investigation has to go beyond credible allegations; evidence is needed and there has to be access to those who gave the evidence in order to establish the authenticity of that evidence. Both are denied due to the practices adopted by the Office of the High Commissioner for Human Rights. Therefore, the entire approach to accountability has to be revisited if the truth is to be found in order to dispense justice.