There’s movement within and without (parties and nations) 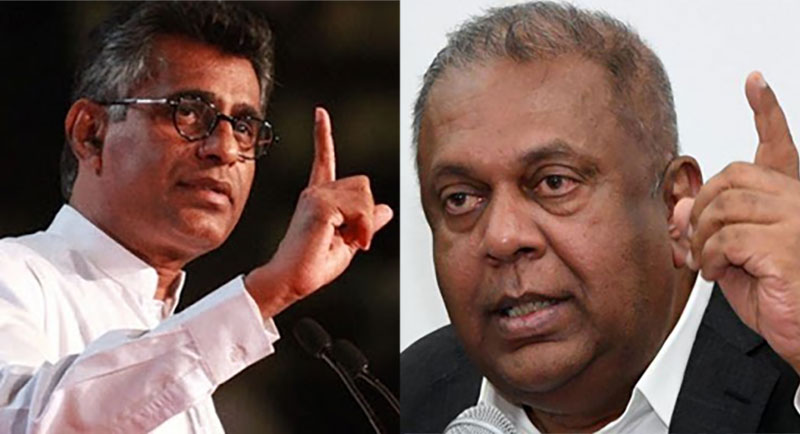 Those who worship free markets would say, ‘there is no such thing as a free lunch.’ Nothing comes free. Everything has a price which, they claim, is determined by the play of demand and supply in a market where everyone is endowed with the capacity to obtain all relevant information.

Nice on paper. But let’s go along with the story. So, if there’s no such thing as a free lunch, what do these pundits have to say about the Millennium Challenge Corporation’s purported gift (withdrawn recently after intense lobbying by the US Ambassador and MCC officials, backed by certain members of the previous regime, in particular Mangala Samaraweera)?  They say, ‘There will be dire consequences!’

Strange. Someone offers a free lunch, the would be ‘beneficiary’ says ‘thank you, but no’ or at least shows sufficient reluctance to exasperate the gifting party, the offer is withdrawn and the intended beneficiary is told ‘damn you, you will pay for this!’ So, pay if ‘gift’ is accepted (as per the theory of ‘no free lunches’) and pay if it is declined!

Not too long ago, the US Ambassador was rebuffed by the then Chief Minister of the Northern Province, C.V. Wigneswaran, when he was told to go easy on the government, i.e. regarding the alleged human rights issue which, interestingly, the US had held like a massive rock over the head of the Mahinda Rajapaksa regime. We had resolutions moved against Sri Lanka in Geneva during that period. Come the Yahapalanists and the USA eases off. Obviously human rights were not the issue but whether or not the particular government was willing to play ball. Clearly the Yahapalanists were.

Wigneswaran upset the Ambassador. He is no baby in this game, but he stuck to his guns. Today, if the US Ambassador were to pow-wow with Wigneswaran, she wouldn’t say ‘back off, big guy,’ but is more likely to spur him on.

The US Ambassador is doing just that, with the leadership of the Tamil National Alliance. Strategizing for Geneva in a few months time. Of course the USA, under Donald Trump, quit the UNHRC calling it ‘a cess pool of bias’ but that hasn’t stopped US representatives from deploying proxies to get its dirty work done. The noises we hear from London regarding Geneva 2021 clearly indicate that Sri Lanka can expect to come under fire.

Having opted out of Resolution 30/1 which was happily co-sponsored by a naive, nay pernicious, set of decision-makers, Sri Lanka would no doubt have raised the ire of her detractors, led of course by the USA and the UK. The US Ambassador, whose stint in Colombo seems to have been almost exclusively about pushing through the MCC, needs to wash off the egg from her face. Her not so behind-the-scenes maneuvers is just that.

The NGO lobby currently languishing in reduced circumstances are doing their bit. This time around they are in the business of disposing dead bodies. Yes, the ‘controversial’ issue of whether or not to bury those who have died of Covid-19. It’s the Muslims who are upset and that works well with their whine about majoritarianism.

The Government has played into their hands by its indecision. To be fair, the entire Covid-19 story is about incomplete knowledge. London is now hit by a new strain of the virus. London will revisit policies. The lack of complete knowledge forces decision-makers to err on the side of caution. The government decided that burial was risky. The World Health Orgainzation says ‘it’s not unsafe.’ However, they’ve added that factors particular to the country need to be taken into account.

So far, the authorities advising the Government on the safety or otherwise of burials have ruled ‘unsafe.’ In deference to a need to be sensitive to religious sentiments, the Government explored the possibility of burying Muslim victims in the Maldives, following discussions with that Government.  Muslim leaders who have played the religion card in this issue seem to have suddenly found a patriotic card up their sleeve: ‘we want to be buried in our motherland,’ they cry. So far, representatives from exclusively Muslim populated areas haven’t offered to accept the bodies of their brethren who succumbed to Covid; those in Kattankudy, for instance, haven’t said ‘come, bury them here.’

The government is paying the price for trying to please everyone. They want to allay the fears of the general public and also want to sort out the anxieties of a particular community. It is best to let Science chair the decision-making process. What’s safest? Cremation, obviously. Is burial really risky? If the answer is, ‘there’s zero risk in buying the Covid-19 dead in certain parts of the country’ and this assertion is accompanied by a list of ‘safe spots,’ then the Government should go with it.

So far, we’ve been getting mixed signals. Deciding that ‘burying’ will not win any friends in Geneva. If it’s not one thing, it will be another — that’s how the human rights game is played. The government cannot afford to ignore ‘Geneva’ but shouldn’t let the antics of that political theater frame decision-making here in Sri Lanka. Clarity is what is required and opaque is what the government has given us so far.

We mentioned Mangala Samaraweera. He sided with Sajith Premadasa when the UNP fell apart, but decided he wouldn’t campaign. He went into what could be called semi-retirement. However, he continues to be political, taking potshots at his favorite enemies, the Rajapaksas. More recently, he has targeted Patali Champika Ranawaka. Managala probably sees Ranawaka as a possible presidential candidate after the latter quit the Jathika Hela Urumaya (JHU), clearing that obstacle to a bid to wrest leadership of the Samagi Jana Balavegaya (SJB) at some point in the future.

Mangala has attacked Ranawaka using the hackneyed epithets of chauvinism and racism. Ranawaka’s backers have responded to Mangala, pointing out that this ‘great liberal’ was not averse to playin the caste card when contesting elections in Matara. To be fair, ‘caste’ hasn’t factored in Mangala’s decisions when in power. Race and religion have, though, in reverse: he’s shown a rabid aversion to the Sinhalese and Buddhists.

Someone might say, ’But he’s a Sinhalese and a Buddhist!’ True. Consider this, however. In a colonial theatre, the victims are relentlessly suppressed and ridiculed to the point that they begin to hate themselves. They source humiliation  to the truth of their reality, their history and heritage. The weak, by way of ‘escape,’ parrot and mimic the words and actions of their subjugator in a conscious or unconscious belief that this would qualify them for membership in the victor’s club. They seek in suddatvaya what they are denied on account of their sinhalatvaya, so to speak. The sudda attacked the Sinhalese and Tamils. The sudda attacked the Buddhists and Hindus. The sudda didn’t worry about caste. Does that tell Mangala’s story? He would know but even if he did, he probably won’t say it.

The Mangala-Ranawaka spat, however, is just a side show at the intra-party circus. Sajith Premadasa and other SJB stalwarts took to the streets over the Covid-19 burial issue. Ranawaka was a conspicuous absentee. Silences and absences also tell stories. This one is just starting.

However, a week ago, the SJB’s working committee met to ratify a party constitution. Sajith Premadasa was named leader. No deputy leader was named. Kabir Hashim was elected Chairman along with six others who were named ‘Senior Vice Chairman’ — Kumara Welgama, Rajitha Senaratne, Ranwaka, Thalatha Athukorala, Imitiaz Bakeer Markar and Sarath Fonseka. Ranjith Madduma Bandara is now the General Secretary and Tissa Attanayake the National Organizer. Officially, at least, Ranawaka is at the second-tier and he’s not alone. How his political fortunes unfold is left to be seen.

Another story that’s just moved out of the foreword or rather is being written in fits and starts is that of the Ape Jana Bala Pakshaya (AJBP). The AJBP started its political life inauspiciously. Several lists were rejected. The party didn’t win a single seat from any of the districts it contested. However, they were accorded one slot when the numbers for each party from the national list was determined.

That was the second inauspicious eventuality. As is often the case with parties who secure just one slot in the national seat (e.g. the United Socialist Alliance in 1994, the Sihala Urumaya in 2000), there was a scramble (to put it mildly). The then Secretary nominated himself. Ven. Galabodaaththe Gnanasara Thero of Bodu Bala Sena fame and Ven Athureliye Rathana Thero (formerly of the JHU, credited with precipitation the JHU parting ways with the Rajapaksa and making way for Maithripala Sirisena’s ascension to the presidency) objected.

It took four months for the protagonists to resolve the matter. Ven Gnanasara was ineligible since the list on which his name was had been rejected (he could make a come-back if the person who does get in resigns). The Secretary was removed. An election pact had given Ven Rathana the authority to endorse a nominee, i.e. he had veto power.

We do not know what kind of agreement was made between the interested parties, but as of now, Ven Rathana has the floor. What he does there is anyone’s guess, but it would not be wise to count him out. Ven Rathana has a long history of identifying key moments and weaknesses, he can mobilize forces almost like a magician producing a rabbit out of a hat. He should not be underestimated.

So now we have 223 Members of Parliament and the Speaker. That’s 224. How about the 225th? That’s reserved for the United National Party (UNP) and that too courtesy the national list. The party, having suffered the most humiliating electoral defeat in its history, has not shown the kind of bickering we saw with the AJBP, but neither have we seen any urgency regarding this matter.

Of course as things stand it is of little consequence. The party is in crisis and has to worry about survival. Ranil Wickremesinghe is still the leader and will remain so until 2023, unless he steps down. This was the decision reached when the party decided to nominate Sajith Premadasa as its candidate for president in 2019. All top posts will fall vacant at the end of the year. Wickremesinghe, not surprisingly, still holds the reins but of a party that’s in very real danger of following other ‘old parties’ such as the LSSP and CP into oblivion.

What will 2021 have in hold, politically? We are not soothsayers, but it is safe to say that the way of the virus and of course how it is responded to will shape things like few other factors can.

May the year 2021 bring peace of mind. Good health to all! Stay safe and don’t forget to abide by protection protocols. Be kind to others. Now, unlike any other time, this might make a different to self, family, community, nation and the world.