There could be disappointment, even if you are defamed 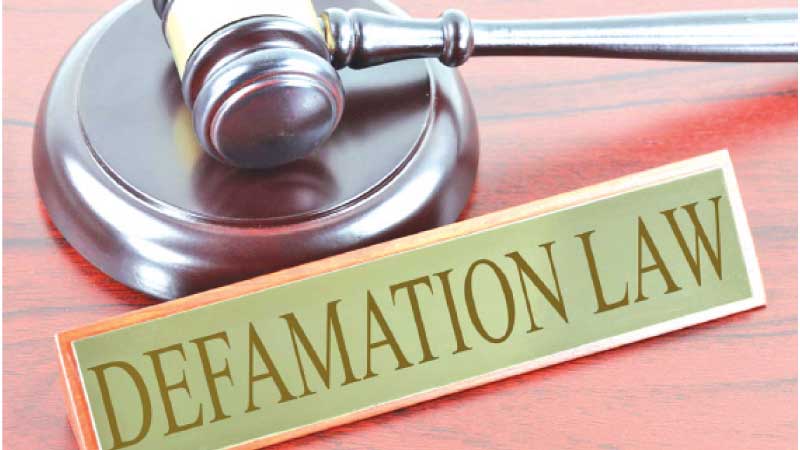 A gentleman by the name of Satarasinghe sued a certain John Fernando and the Attorney General for defamation in the early 1990s in the District Court of Panadura. The defendant worked for a State Corporation.

However, when the case was pending the defendant died. It would have been almost commonsensical that the defendant’s wife cannot be sued for defamation instead, as she had nothing to do with committing the alleged offence, but this is exactly what happened.

The plaintiff sought to substitute the deceased person’s wife as the party against whom the action lies.

However, even before he managed to effect that substitution or move on the matter substantially, the learned District Judge hearing the case decided in favour of the plaintiff!

The matter was taken up in trial on 13 issues and when the case was due to be called on March 24, 1993, for judgement, Court, on being informed of the death of the original first defendant postponed the case for steps for substitution as mentioned above — and for judgement.

Here is how that matter was recorded in the case judgement in the Court of Appeal, when the case subsequently came up in that Court:

“An application made by the plaintiff to substitute the widow of the original first defendant as the defendant was objected to by the second defendant — the Attorney General — on the ground that on the death of the defendant the cause of action in the case being of a personal nature did not survive. While this application was pending before Court, the learned District Judge proceeded to deliver the judgement in the main case, without making an order in the above said application for the substitution made by the plaintiff.

“Subsequently, the learned District Judge by her order dated January 18, 1994 allowed the application of the plaintiff for substitution of the defendant.”

This may have been a case of ‘the bull goring the man who fell from the tree’ (gahen watticha minihata gonaa enna wagey), as far as the wife of the deceased was concerned. Not only had she lost her husband, but she was also being made a party to a defamation case that she by no remote stretch had anything to do with. As if that was not enough, the Court had now ordered that a sum be retained from the gratuity she was entitled to upon the death of her husband, as damages in the said defamation case.

The substituted defendant appealed and the Court of Appeal seems to have taken one look at the case and decided that the appellant in the case — the defendant in the District Court case — cannot be substituted as a defendant in a defamation case when the original respondent — her husband — dies.

In the case under review, not only had no order been made against the deceased at the time of death, but there was also one more issue that the Court had to consider.

This is how the Court addressed that issue. “It is to be observed that Form 89 of the Civil Procedure Code sets out the averments that are required to be included in a plaint in an action for defamation according to which the very words complained of or words substantially the same as those charged has to be included in the plaint.

“In Odgers on Libel and Slander (sixth edition) at page 623, it is set out that in an action for defamation the plaint must set forth the very words complained of.”

On both the main considerations that were under review by the Court of Appeal, the Judges of that Court held with the appellant.

However, as has been evident from judgements in various cases involving defamation, it’s not exactly an easy call — this matter for a judicial bench to decide whether words were defamatory or not. The words uttered must be published, and they must be defamatory from a reasonable man’s reckoning. The following clarification from a judgement in a defamation case should suffice to clarify the issue:

“Claude Perera vs. Arasu 1983 2 SLR 484 “where the Plaintiff called the Defendant, “Bloody swine, Bloody rogue, Bloody crook who robbed the University,” where the words of defame were crystal clear.

Publication of the Statement was admitted. To decide whether the statement is per se defamatory, the test to be adopted is the test of a reasonable man. C.F. Amarasinghe in his book Defamation and other Aspects of the Actio Injuriarum in Roman Dutch Law (in Ceylon and South Africa)” states that the first to be determined is whether the words have a particular meaning and then the question must be answered whether the meaning has the effect of lowering the Plaintiff in the situation of the society.”

All that notwithstanding, do not even think about suing the wife of the man who may defame you, in the event the offender dies. You would just have to take it that death was in itself, an adequate punishment.