The ‘unseen’ underside of Black July 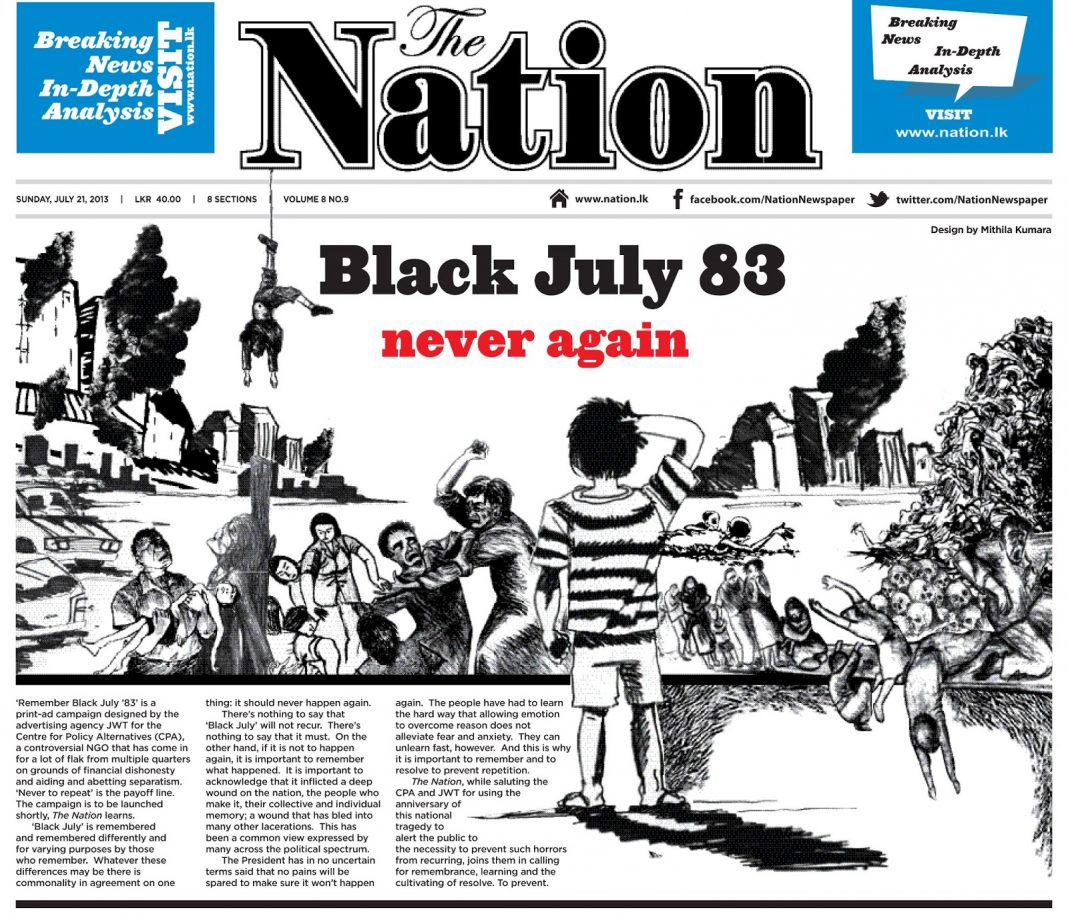 He was at one time the foremost Tamil leader espousing the Eelam cause, a man who fired the separatist imagination of a generation of Tamil youth, a man who went from being referred to ‘Thalapathy’ (Commander/General) by admiring supporters to ‘Thurogi’ (traitor) by the very same one-time admirers and later killed by forces he himself unleashed. He was assassinated on July 13, 1989. Only the inimitable D.B.S. Jeyaraj, provider of the above information, remembered the 25th anniversary of his assassination. Everyone else forgot ‘Thalapathy’.

‘July 1983’ or ‘Black July’, a part product of the communalist politics that the likes of Amirthalingam indulged in and benefited from, is annually commemorated on the other hand. There’s politics and commerce in commemoration. Chandragupta Thenuwara, for example, gets mileage for his ‘art’, claiming unending trauma associated with July 1983, a kind of angst that did not touch him in the far more brutal and mindless violence at the end of the same decade.

‘Black July’ is also a frequent referent used by those concerned with (obsessed by?) peace, conflict-resolution, reconciliation and other such processes/concepts that have currency in the ‘free’ market of ‘activism’. The NGO-economy has thrived and the money that has propped it does not and will not come agenda-free. ‘No More July’ is therefore an assured fund-bringer in the political economy of commemoration.

Let’s not get confused here. July 1983 happened. It should not happen again. Not to anyone. To the extent that commemoration reminds, warns and insures against reenactment, it is certainly a useful exercise, dampened only by the not so innocent politics of the commemorators and other profiteers.

This side of the positives, looking back, is an issue which is less colorful and hopeful than what the kites, lamps, candles and other commemorative frills exude. Let us call it the underside of ‘Black July’.
It’s more than 30 years since ‘Black July’. Rarely have those who consider the Sinhalese (and of course Sinhala-Buddhists) as villains (for whatever reason) failed to tag the entire community to that violent political moment and the blame-game pertaining to it. The politics of commemoration and reminder have gone beyond the blaming, in both intent and effect. ‘July 83 PLUS’ (shall we call it?), that is a moment and violence blamed on all Sinhalese (‘anti-Tamil pogram’ implies unanimous intent and involvement by the communal other, the Sinhalese), was thrown in the face of every Sinhalese who thought fit to object to Tamil Nationalism/Separatism in any of its many ideological forms and concrete articulations including assassinations, explosion of bombs and other acts of terrorism.

There was a time when affirmation of identity was denied to the Sinhalese and Buddhists through instilled fear of vilification. Instead they were required to affirm and champion a ‘Sri Lankan identity’ even as identity was not only the flagship political of other communities but was affirmed by gun, bullet and bomb. Proxies of that kind of politics included a deliberate vilification of any political position that championed the unitary state. The Sinhalese, by being constantly reminded of ‘Black July’ were duly ‘guilted’ into ideological silence. Communal projects of other groups had a field day throughout the nineties and in the first few years of the new millennium.

So who benefitted? Certainly not Appapillai Amirthalingam, Vettivelu Yogeswaran, his wife Sarojini or the many Tamil politicians who planted and watered the communalist seeds in Tamil youth. Extremism was empowered and one reason is probably the fact that objection from Sinhalese was muffled or stifled. That empowerment effectively robbed voice of those who advocated saner and in hindsight more pragmatic courses of action. Extremism had a good run, but in the end the entire Tamil community suffered the kinds of violence that put ‘Black July’ to shame. Abduction of children, hostage-taking, the obvious depravations of armed conflict, assassination, infighting among Tamil groups, you name it, it was the Tamils who lost most and not at the hands of the so-called ‘Sinhala Buddhist State’ alone. In short everyone lost.

We are not done with commemoration politics, it seems. ‘Black July’ was resurrected when ‘Alutgama’ happened. There’s logic to it that goes beyond narrow communal politics and the by now old and boring vilification of Sinhalese and Buddhists. Few wanted an ‘Alutgama’. Few want another Black July. But there was over simplification, wild extrapolation and veiled and direct vilification that did not and will not help the cause of national unity. Lost in ‘Alutgama’ was ‘Welipenna’. That’s not an accident. That’s political.

If the politics of reminding forced Sinhala objectors to Tamil chauvinism, separatism and extremism to preface statement with apology and solemn vow not to let Black July happen again, today those who have ideological issues with certain extremist Muslim political positions or even justifiable anxieties of intense identity assertion by that community are forced to first back-foot themselves, apologize on behalf of extremists and for violence they unleashed. It’s post-Black July all over again, one might say.

There is danger in silencing through vilification. There is danger in taking the majority community out of the equation of identity politics. It will not affect those who are ideologically predisposed to vilify the Sinhalese and Buddhists, among them of course agents of destabilization located strategically in NGOs with fairytale names, adherents of other faiths operating under the cover of ‘secularization politics’ and thereby winning space for cultural erasure and other kinds of body blows that make control easier. But it will impact the very same communities in whose name and in whose ‘defense’ this silencing is attempted.

Today, no one talks about the critical role played by thugs who were part of the then ruling party’s trade union, the JSS in ‘Black July’. There may very well come a ‘tomorrow’ when few remember the BBS and ‘Rev’ Gnanasara. There is many a Black July waiting to happen. Theoretically there can be any number of ‘Nandikadaals’ too. Between these, there’s only one thing possible: tragedy. For all.