The Unbearable Lightness of Being the Son of Mervyn 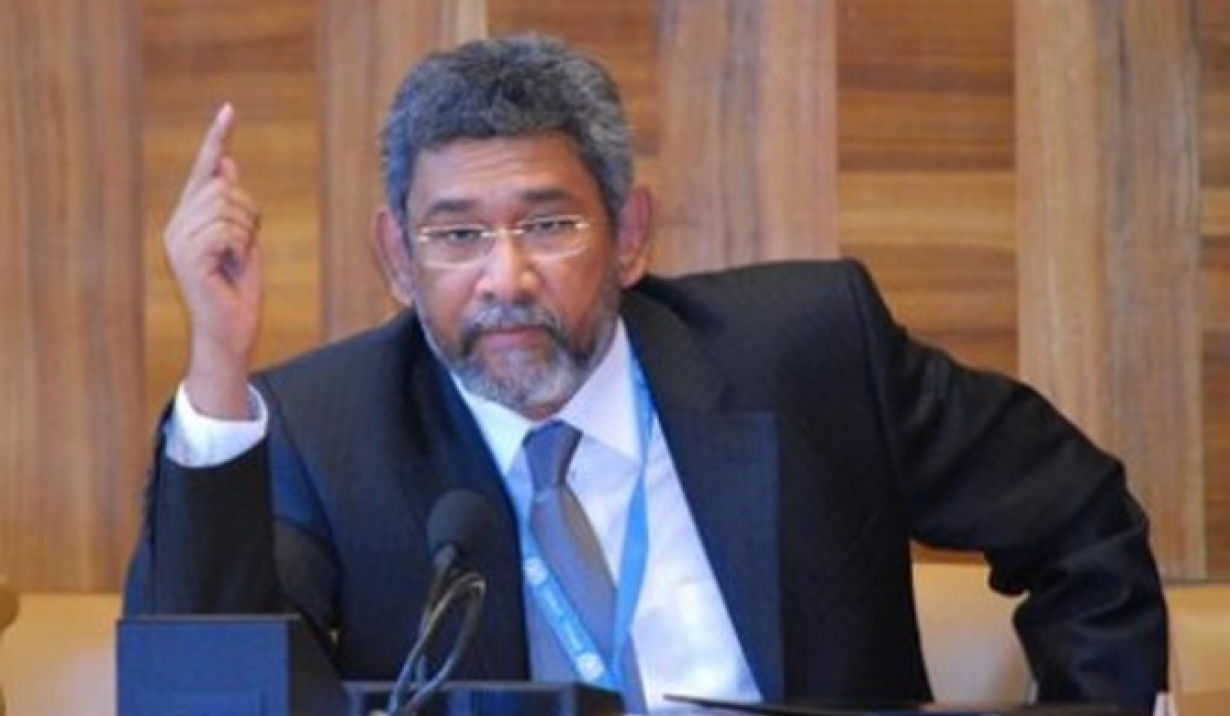 Oh, once-Comrade Dayan. Even a bodhiliya arrays less spectra than you. Even better, here is a chameleon who makes the entire environment appear to change color, which yet remains the same shades of a lustrous green one minute, and a superficial veneer of red the next.

There’s this to be said for the erstwhile-comrade. He has the survival instincts of an sporadically employed mercenary, damned to several more life sentences in the inferno of samsara. His carrying card simply displays, ’Have Pen Will Drivel” (Have Keyboard will Drool, more like it!)

The current paymaster of the supper he slings for, or pops all pistols for, appears to be the hapless sojourner Sajith Premadasa. Dayan extols SP as heir to father Premadasa’s presumed populist patrimony – a legacy Sajith failed to exercise while gestating under the heavy breathing of Ranil W’s protracted neo-glibberish assault, preening himself as the oligarchy’s default option.

Sajith’s lasting bestowal to political economy may be his division of the working class into dwarf (manual labor) and giant (security). Yet that does not prevent DJ from hallucinating about being a regnant SP’s foreign minister one day. Out there rubbing shoulders with born-again Talleyrands, Metternichs and Castlereaghs (who were trading off Sri Lanka to the English in 1815). Perhaps, DJ then too, would also have seen such a fate as real politic, inevitable, and telling us the best right angle to bend over.

Almost every DJ article usually references his papa’s pen, which suggests a lingering oedipal guilt complex, or sad attempt at channelling some hereditary gravitas. Though for the life of us, swarthy natives, we cannot figure what enlightenment-lite, such colonial scribes as Mervy and Tarzie switched on.

DJ inevitably evokes his Geneva jive, where he calls down a kind of Custerian last-stand heroism, merely postponing imperialism’s innings to another day, which he then warns will surely bring righteous damnation down upon us, minus his manoeuvres .

He tries to sound youthfully hip by throwing in a reference to a hollow long-dead white rock and roll lyric, a lame Hollywood plot or torrid TV melodrama (not a baila or a jataka or a siupadha for him), then climbs Ranil’s relatives’ Wijeya financial podium as imperialism’s town crier, awakening us to his version of international realities (read: white dictat), delivering the dying empire’s and their brown regional viceroy’s ever-postponed deadlines (MCC anyone?) for Sinhala armageddon.

DJ claims he was “born on a free island”. Really? When the hell in comprador heaven was that? 1504? His unrepentant savior Shanmugathasan (after whom, DJ was delivered into the arms of JR and Delhi) must be barbecuing over a red hot grill in hell.

Both Dayan J. and Tisaranee G. huff, puff and pant against oft-repeated imperialist-donored tripe about autocracy. A label exclusively applied to Africans, Asians and darker Americans (who also get more exotic titles like caudillo!). Next will be strongman and Bonapartist, il Duce and Fuhrer.

Yet both DJ&TG more than justify father’s Prema’s supposed populism that resorted to a mega-mass-murder, largely of innocents, on a scale recalling the English mass-murder of 1818 and 1848, minus perhaps the scorched earth policy, though plus plus a ‘peoplization’ policy camouflaging further privatization.

Do we not face at this hour, even greater paroxysms than 1987-89, after decades of selling off the state? And who other than Sajith has more access to an urban lumpenproletariat to play a bonny Bonaparte at a Brumaire? The stage is now being set for a Sorosian color revolution, with slush funds flowing to the CPA-type NGOs and the JVP, alongside the UN, the so-called Core Group, the embassies, etc., also kicking up a chorus line, to subvert the people’s clear and present will.

The cry about ‘family bandyism’ is back, yet DJ has no qualms about such UNP father-son or uncle-nephew incest, while proclaiming: “President Jayewardene never entrenched a family or clan-based oligarchy in and through his political model.” Whoa! Now who but such an oligarchy did JR entrench. JR ensconced the comprador Colombot white-Black rentier elite (with the monopoly Wijeya Group the-still reigning media mouthpiece) that continues to hold on to power with a tenacity that parallels Ranil W’s desperate and unashamed grip.

Jayawardene was a vandal who in scale, would make of an Atillah the Hun, a destructive brat in a Pyrenean playpen. Destroying nascent industries that Sri Lanka still vitally needs, which DJ now declares an open-economic success story!

Instead, DJ cavils, yodeling the Colombot anthem, that the 1970-77 attempt at self-sufficiency and import substitution was what “wrecked” the Sirimvo government: not JVP infantilism, not OPEC, not worldwide famines, not the usual US bribery, etc

He then heaves hyperbole against President Gotabaya persisting in an import-restrictive economic policy ‘with all the zeal of a Maoist advocating the Great Leap Forward and steel-smelting in backyard furnaces” Why does a man who still affects to draws deep on a selective Communist archive, now dispense with all nuance and then parrot the white man’s nonsense historiography about Chairman Mao’s China, which had to navigate massive famines, biological warfare, and a fraught international mishmash.

There’s something eerily kindred between Kumar David the Trot and DJ the I-don’t know-what now. For all their talk of democracy, they are quick to call the masses asses, tho DJ condoms his misanthropic bombast against majoritarianism with claims to higher ideals

Still, one can’t help feeling that their main complaint is the Sinhala Buddhist ethos of the country, that dares assert itself.

And yet, there’s no question only a cultural revolution powered by a modern national economy will take us through the next few years. And yes, unerring leadership against a treasonous merchant cabal, which all his new found-again friends truly represent, is the dire need of the hour.