The UN, Separatism and the Mechanics of Independence 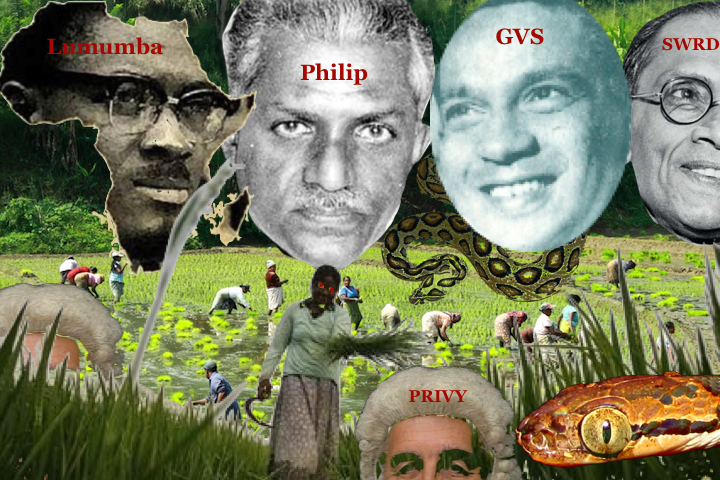 Buying off local military officers by foreign agents is examined in an Island story this week. Also, not a week goes by without some company (purportedly local but with foreign links) publicly displaying their philanthropy towards the security forces, generously offering advice, equipment, health supplies etc.

Meanwhile a massive ‘data dump’ exposes English spies buying off military and police in Lebanon, as well as English terrorism in Syria, showing the extents of such bribery to recolonize our countries.

It’s not just the US buying politicians, officers and officials. Recent media unison about how great US democracy and its ‘institutions’ are, also exposes what great stooges our scribes and economists are.

The sheer creativity and cunning of the trader class, their politicians and their courts, to subvert any progressive legislation that will advance the country, is most evident in what happened to the Paddy Lands Act (PLA) of 1958 passed by the SWRD Bandaranaike government.

England still controlled the legislature, long after 1948 independence: an English Appeal Court ruled, ‘Nought’ is not a number, to sabotage the PLA’s Cultivation Committees that would have provided security to impoverished tenant farmers and inspired more productive agriculture. A story worth retelling, especially when colonial forces still wish us to be ruled by foreign courts!

This ee therefore looks again at the PLA, and what happened to it. As well as the tragedy of Sinhala cultivators in the East after the 1818 and 1848 uprisings (also see ee, 8 & 15 Aug 2020). Modernizing agriculture and enriching the cultivator is crucial for a rural home market, 70% of Sri Lankans. The great work of economists like GVS de Silva, and politicians like Philip Gunawardena on the PLA, also must be given their due. Those who oppose ‘military rule’, ignore that the only way colonial and feudal practices were eliminated in now developed countries, was by military rule!

Congo, SL & UN – The murder of the Congo’s first independent Prime Minister Patrice Lumumba was committed in January 1961 (16 months after the murder of Sri Lanka’s first independent PM, SWRD Bandaranaike) during a ‘separatist’ rebellion in the province of Katanga against his government, supported by Belgium (now home of the EU). His murder was planned by the European powers (US, Belgium, England, France, etc.). They also murdered the UN Secretary General, 8 months later, because they felt the UN was not compliant enough with imperial dictat in the Congo.

Most commemorations of Lumumba do not discuss the advanced Congo working class from which he derived his genius and power. So ee reproduces a very interesting excerpt on the Congo from SBD de Silva’s The Political Economy of Underdevelopment (see ee Focus) on the role of the whites in that ‘secessionist movement’ during Congo’s battle for independence: Flemish settlers from Belgium had been implanted in Katanga. SB writes of Flemish settler conflicts with the Belgian government’s stunting of a fabulously wealthy economy, their attempts to put the Congo people onto reservations like in Canada, their inability to exterminate the Congo people, the growth of a technically skilled Congo working class that was denied all rights, the role of the Évolués (kalu suddhas) and an alien merchant class. SB also detailed how one industry leads to another, amid growth of a home market.

This week saw the 60th anniversary of Lumumba’s murder, heralding 6 more decades of mass murder promoted by European powers. Over 6 million have been killed in the Congo – a genocide ignored by the media, who see no ‘holocaust’ or ‘fascism’ there. This may feel familiar to ee readers.

This week also saw the 47th anniversary of the murder of Guinea-Bissau leader Amilcar Cabral in 1973, just before their independence, which sparked the expulsion of Portugal from Africa. Also it is 97 years since the liberator of the USSR, VI Lenin passed away. Lenin too was shot (and injured) by an English agent. The Slavic people were seen as the ‘White Negroes of Europe’.

The promise to regulate private banks and finance companies is a pipe dream for they have innumerable ways to undermine this. Decision-making on investment and jobs must be taken out of the hands of the capitalist sector. Bankers must not only be fined but jailed. All this is easier said than done! But, this is inevitable, now or – after much suffering – later.

Rather than building luxury hotels and condos, public housing is the great need of the hour. The crowding of workers in their homes and at work has been exposed for the health hazard it is, not just to themselves.

After 24 hours of news per day on how terrible Trump was, we get 24 hours a day of how great Biden is. Yet a butcher cannot become a Buddha. US imperialism is alive and kickin’. Our job is to develop a vaccine to overcome not just Covid.

Curiously, it’s also dawned on some fans of the white West that the USA is not a democracy at all. Why does the obvious take so long?

[This has been extracted from www.eesrilanka.wordpress.com]