The Ukrainian Beartrap: When Simulacra Bites Back 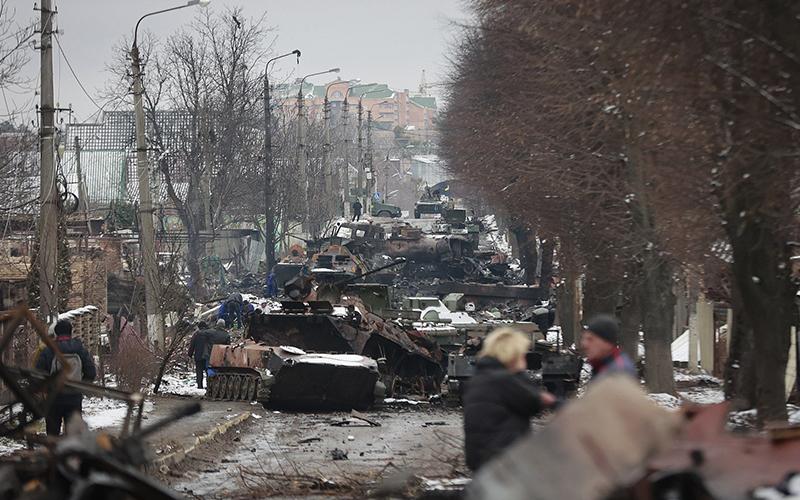 “Our entire linear and accumulative culture collapses if we cannot stockpile the past in plain view.”

Jean Baudrillard, The Procession of Simulacra

“I would die happy if I knew that on my tombstone could be written these words, “This man was an absolute fool. None of the disastrous things that he reluctantly predicted ever came to pass!”

Well dearest motherfuckers, after months of pushing, Putin has finally pushed back and made the mainstream media’s make-believe war in Ukraine a very visceral reality. It took months of poking. Months of prodding. Months of the most relentless propaganda campaign in the sordid history of the Military-Media Industrial Complex. Months of far-flung conspiracy theories, baseless accusations, and nearly weekly predictions of an imminent invasion. A 24/7 news circus of when-not-if. But all that hard work has finally paid off. After spending the better part of four months in a propaganda pressure cooker, Ukraine has finally exploded into total war.

The news faked it until Putin made it and the neocons on the prior’s pay dole couldn’t be more ecstatic if you clamped jumper cables to their nipples and fed them a live puppy. Those expanded cable psychopaths are lined around the block like call-girls of color outside CPAC, waiting for their turn to finally be right about something for a change. There were no weapons of mass destruction, Muammar Gadhafi wasn’t the Devil, but Vladimir Putin has finally invaded Ukraine! If you listen very carefully from any quiet corner of this country, you can hear Sean Hannity and Rachel Maddow slapping five and shouting “We did it!” The bastard simulacra of the news machine has finally grown fangs and bitten back. But this heinous thing didn’t start in November. The provocation of Putin’s Russia is the product of a concerted NATO strategy of tension that goes back decades.

In 1989, as the Soviet Union began to circle the drain, then President George HW Bush and Secretary of State James Baker gave Mikhail Gorbachev their solemn word that if the USSR allowed the Berlin Wall to fall then NATO wouldn’t move one inch to the east of the Elbe River. Being the gullible optimist that he was, Gorbachev took these two mincing war criminals at their word and never had it put on paper, but multiple sources on both sides witnessed the promise and the whole world watched it break in 1999 when a military alliance designed for the express purpose of destroying the Evil Empire that had ceased to exist for seven years crossed the Elbe and swallowed up four former members of the Warsaw Pact; Poland, Hungary, and the Czech Republic, whole.

Less than a year later, NATO violently dismembered Russia’s closest ally in Europe, Yugoslavia, and gifted Kosovo to a motley crew of Islamic extremist kidney thieves. The message was frighteningly clear to Russia, NATO lives, and it was on the warpath. That same year, the deeply distrusted Yankee stooge Boris Yeltsin was pushed out for his intransigence and replaced by his more capable dauphin, Vladimir Putin, who had no doubt learned a very harsh lesson from his mentor’s fall from grace. Russia was through with being fucked with and their patience was running thin. Still, NATO’s march east continued.

The early 2000’s were marked by a wave of carefully choreographed uprisings funded by the State Department’s National Endowment for Democracy that put decidedly pro-American neoliberal gangsters in charge of countries across the former Soviet Union, including Georgia with the Rose Revolution of 2003 and Ukraine with the Orange Revolution of 2004-05. Also, in 2004, NATO expanded right to the Russian border with the absorption of seven nations, including three former Soviet republics in the Baltics. American boots were literally on Ivan’s doorstep.

In 2008 things went from bad to worse with the Bucharest Declaration where NATO announced its intention to put both Ukraine and Georgia on the path to full membership. That same year, Georgia launched an unprovoked assault on the ethnic Russian autonomous region of South Ossetia, murdering several Russian peacekeepers in the process. Putin responded with a quick assault on Georgia followed by the recognition of the sovereignty of the breakaway republics of Abkhazia and South Ossetia. This message should have been loud and clear to NATO, there was a new sheriff in town, and he wasn’t respecting prior arrangements. But NATO just kept on pushing.

The beginning of the end came in 2014 with the so-called Maiden Revolution. After the democratically elected president of Ukraine, Viktor Yanukovych, rejected a shitty economic deal from the EU that would have pulled his nation farther west and excepted a better package from Russia instead, he was subjected to a brutal campaign of media demonization from pro-western cable news oligarchs like future President Petro Poroshenko and violently overthrown by a gang of American backed neo-Nazis and ultra-nationalists like Svoboda and Right Sector.

This isn’t a conspiracy theory. Leaked wiretaps revealed phone calls from this time between Assistant Secretary of State Victoria Nuland and American Ambassador to Ukraine Geoffrey Pyatt, plotting every last detail of the so-called revolution down to who would fill which cabinet positions, and the aforementioned National Endowment for Democracy openly admits to supplying their Ukrainian collaborators with five billion dollars in aid over the last two decades. For Russia this was one push too far. It was for the ethnic Russian regions that had been unilaterally gifted to Ukraine by the Soviet Union as well.

Upon witnessing known skinheads who openly advocated for their ethnic cleansing take control of Ukraine’s National Guard and National Police, the Russian speaking provinces known collectively as Novorossiya went into open revolt. These people had lost millions defeating Hitler and voted for Yanukovych by margins as high as 90%. They were goddamned if they were going to just lie down and allow people carrying the flags that flew above the Ukrainian collaborationists who massacred their grandfathers rule them. Crimea held a popular referendum and overwhelmingly voted to rejoin Russia. Putin was more than happy to except these results as it insured the safety of Russia’s Black Sea Fleet in Sevastopol but left the People’s Republics of Donetsk and Luhansk to virtually fend for themselves when they voted to declare independence.

The junta in Kiev launched a brutal campaign which they unironically called a war on terror against the rebel republics using neo-Nazi militias like the Azov Battalion who themselves openly recruited mercenaries from known American domestic terrorist organizations like Atomwaffen and The Base. Putin signed the Minsk Agreement with Ukraine in 2015 that promised to demilitarize the two republics in exchange for autonomy and local elections, but Ukraine never held up their end of the bargain. Finally, after years of NATO training missions and wargames waged with nuclear capable battleships and bombers on their border and months of brazenly blind media speculation, Putin finally snapped and launched a brutal invasion of the rampaging dumpster fire next door.

Wouldn’t you? Wouldn’t anybody? Putin’s war in Ukraine is a lot of things including immoral and inexcusably brutal but one thing it is definitely not is unprovoked. NATO has been brutally provoking Russia for twenty goddamn years. What’s happening in Ukraine right now, as tragic as it may be, is a case of imperial blowback just like 9/11. You can only fucking push people so far before they push back. Even so, I honestly didn’t see this one coming, not like this. People who read my shit regularly will remember that just a month ago I wrote a piece boldly titled “The War in Ukraine Will Not Occur.” But I wasn’t alone in making that prediction.

Ukraine’s own American backed plutocracy including Saint Zelensky were right there with me telling the world that Biden and the hounds of cable news were full of shit. I never mistook Vladimir Putin for a good person, but I didn’t think he was a fucking imbecile either and that’s exactly how he’s fighting this war. This isn’t the master chess match we’re used to seeing Putin play in places like Georgia. This is a balls out naked regime change campaign. What the fuck happened? This war may have been inevitable but what led a cold-blooded KGB neck-snapper like Vladimir Putin to fight it like George W. Bush?

I can only speculate, and I wouldn’t blame anyone for taking my speculations with a grain of salt, but I still honestly don’t believe that this invasion was ever Putin’s first choice. His intention with the buildup on the border was to tell the world enough in a language they would understand in order to force America and Ukraine to the negotiation table. This plan backfired when Putin underestimated the power of the Military-Media Industrial Complex. To a strongman left over from the Soviet era, the notion of the media becoming more powerful than the government itself is probably inconceivable, but once the deep state monsters on cable news got a hold of the narrative, they ran with it.

I believe that the final straw for Putin came the week before the invasion when Volodymyr Zelensky suggested leaving the 1994 Budapest Memorandum and bringing back Ukraine’s nuclear weapons program at the Munich Security Conference. Ukraine still possesses all the enrichment technology from the Soviet era along with the aircrafts and short-range missiles capable of delivering it to Putin’s doorstep. A Ukrainian nuclear weapons program could be operational within years if not months. The very real prospect of a NATO allied military deeply integrated with neo-Nazi whack-jobs pointing a doomsday pistol at the Kremlin’s temple was a step too far and I don’t believe that Zelensky ever would have taken it if the media hadn’t subjected his nation to such levels of manufactured hysteria.

Putin chose Plan B and has given those fucking ghouls in the War Machine exactly what they wanted. He has blindly stepped foot into the quicksand of an unwinnable quagmire that could quite easily drain his already impoverished nation of its already limited resources and single-handedly isolate them indefinitely from the European integration that could have been their salvation. And I’m not convinced that this wasn’t the point all along. It wasn’t so long ago that the United States manufactured a frighteningly similar quagmire in Afghanistan for the Soviet Union with their invention of modern-day Islamic terrorism. This Afghan trap sped up the demise of the USSR and gave America its victory in the first Cold War. Now a media baited Ukrainian beartrap threatens to derail our true target in the second one, the Eurasian Century. If Putin doesn’t stand up quick and pull a miracle out of his ass, this despicable war could easily create the conditions perfect for another Color War that could take his head and baste it on an American stake. This could put the American Century on life support and give it just enough time to start a Third World War with China.

God help us all. I pray to Kali that I’m wrong again.

Nicky Reid is an agoraphobic anarcho-genderqueer gonzo blogger from Central Pennsylvania and assistant editor for Attack the System. You can find her online at Exile in Happy Valley.