The ‘Third Wave’ of political chicanery 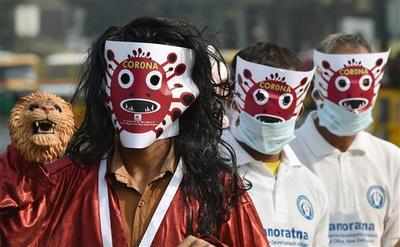 Maybe the government could have clamped things down on Avurudu. Rest assured that many who usually ridicule such festivals (especially those that are celebrated by the Sinhalese and Buddhists) would have cried out in horror about the government being insensitive to cultural sensibilities.

We had the first wave, the second and now the third. And, as is typical of a capitalist world order, crises (or waves) are a bit like the bread of Egypt, Octavio Paz, the winner of the Nobel Prize for Literature once observed — ‘night passes over it and you can read it no more.’ One crisis erases memory of crises that came before. It’s good for governments. It’s good for capitalism.

Hitler, is reported to have asked rhetorically, at the conclusion of the Obersalzberg Speech ‘Who, after all, speaks of the annihilation of the Armenians (Wer redet heute noch von der Vernichtung der Armenier?)’ The reference was to the genocide of European Jews. It’s called ‘THE holocaust’ as though there have been none before or after. We have an ongoing one in fact, the butchering of Palestinians by Israel which, not surprisingly, the human rights angels in Geneva have not the eyes to see.’

Covid-19 is not of those proportions. Millions have died, but it’s still less than 1% of the infected to succumb to the virus. Nevertheless, people talk of ‘The Wave’ as though it is like a holocaust and point fingers as though the pointed are guilty of genocide.

Remember the Tour Guide Cluster, the Navy Cluster, the Kandakadu Cluster, the Minuwangoda Cluster, the Peliyagoda Fish Market Cluster? Does anyone remember when the first wave started and when it ended? The second… well, we can’t blame people for not remembering, because the here and now is not exactly something one can be complacent about.

It is not something to laugh about. We all know someone who was infected. Many know of someone, at least one person, who died. It’s not pretty. It’s not simple. It is serious. And this is probably why we ask about measures taken to combat the pandemic. This is why people wonder if enough is being done.

Of course, in this age of information, we easily forget that misinformation has as much play as anything that’s verified as being accurate. We don’t always filter and even when we do, we send things through sieves that are in part made of the political or ideological.

It is part ignorance and it is part political. Some call for lockdowns or island-wide curfews (‘lockdown’ is understood in multiple ways) but do not spare a thought to the economic ramifications of the preferred mantra. Some, on the other hand, offer mechanisms which could lead to chaos. There’s capital to be made politically in chaotic situations. We don’t need to detail such things.

Some pundits, for example, argued that the government could never get down vaccines. Later the question was ‘when?’ Thereafter ‘where’ and ‘how’? Are there enough beds? Why can’t they do 100,000 tests every day, ask people who don’t know that lab facilities allow for only a certain number of tests to be processed per day. Just yesterday some 50,000 people were vaccinated. Why only 50,000, someone can ask. We heard people demanding that the government bring down all expatriates. Then, when some of those who returned were found to be infected, the government was blamed for opening the doors. Same with tourists. It’s damned if you do, damned if you don’t. That’s the kind of logic employed by some critics.

There are logistics that need to be sorted out, but the whiners don’t have to worry about such things. They even ask why there was a second and third wave in the first place, almost as though the authorities went out of their way to generate such surges. It’s endless. It’s as if ‘we told you so’ is a pill they keep constantly under their tongues, ready to be spat in the face of the government

What’s done is never enough, obviously. Obviously too, there are and will be errors. When it all began there was one virus. We didn’t hear of variants immediately. Obviously there are imponderables in all this. There are can-do things and then there are things that are beyond the control of governments. It applies to citizens too. To collectives and individuals.

Well, we know that the first two waves died down. Does this mean that the third wave will die down too? No, it doesn’t necessarily follow. However, it does mean that the relevant authorities were not exactly twiddling their thumbs.

A story doing the rounds claims that someone has predicted that at least 20,000 will die in Sri Lanka by September. The rider: this extrapolation was made by the same people who accurately predicted what would unfold in the USA. The USA, under Trump in particular but also under Biden, does not have even a rudimentary public health system. Arrogance, Sinophobia and rank ignorance are all part of the US story. Sri Lanka is different. We don’t have the bucks nor the capacity to manufacture vaccines (by the way, the local Sinophobes must be red in face now, considering that China has agreed to help Sri Lanka produce the vaccine here itself!). Well, the plan was to vaccinate 20-25,000 but in the end 50,000 got the Sinopharm jab in the first day itself.  There’s something right in our health system. The government obviously can’t take all the credit, but then those who blame the government for all things that go wrong, are morally compelled to applaud when things are done properly, one would think.

Let’s get back to the Second Wave. That was in October 2020. There were experts painting doomsday scenarios. Among them were doctors. They thundered that the Government had got it all wrong and it was imminent that all hell will break loose. They went silent when the numbers came down.

As the Second Wave subsided, all authorities warned people of a possible third wave on account of the New Year in April. Can anyone say that he/she was unaware of the safety protocols? Can any owner of any shop that was swarming with people claim that he/she was unaware? Maybe the government could have clamped things down on Avurudu. Rest assured that many who usually ridicule such festivals (especially those that are celebrated by the Sinhalese and Buddhists) would have cried out in horror about the government being insensitive to cultural sensibilities.

The fact that the daily numbers (of infected) dropped from around 800 to around 150, perhaps made people forget that the risk still existed. Well, the whiners didn’t applaud anyone for having got something right, did you notice? Anyway, people partied. People ‘tripped.’ And now these very people talk of ICU beds and oxygen availability. When people wonder if Sri Lanka’s situation will become like that of India, one wonders if it’s born of worry or salivating anticipation.

All that said, there’s a need to control things. The vaccine will have an impact. Restrictions will help. There will be mistakes made by all parties either out of ignorance or arrogance. The unpredictable will have some play as well. On the other hand, if the can-do as far as an individual is concerned is neglected, there’s no point blaming someone else.

It takes all to turn things around. It takes one idiot to raise vulnerability levels for all. The experts including innumerable keyboard warriors don’t have to do what doctors, nurses, attendants, public health inspectors, people in the security services and Police, and many state institutions and employees do on a daily basis. They don’t talk, they work. They don’t complain; they work. They don’t have the time to hammer out horror stories on social media, they work. They work, but no one thrusts a microphone before them and solicits their views. Covid-19 has spawned innumerable heroes. And as many vile, self-promoting, politically motivated vermin. Emotion is waving a flag, reason has been retired. There are some incontrovertible truths, though. First, no one knows everything and therefore it is best to verify things before tossing them out as though they are the yield of a comprehensive survey. Secondly, it is best to focus on that which one has control over: adhering strictly to recommended safety protocols. The rest, for the most part, is fluff.

The author can be reached on malindasenevi@gmail.com. www.malindawords.blogspot.com.
Source: dailymirror.lk