THE TENTATIVE WORLD OF THE DARUSMAN PANELISTS 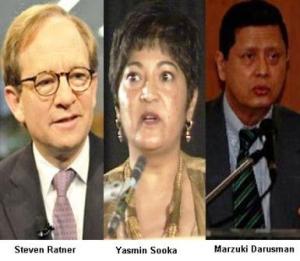 Having now seem more of the report, I am impressed by the skill with which the three Panelists have woven a highly emotive narrative out of hearsay. It is noteworthy that they rarely commit themselves, which suggests that they have not abandoned all understanding of basic principles of evidence.

However they make up for this by repeatedly bringing up the same points, with variations on what they claim they know definitely, and what they grant is tentative.  Initially I thought this was subtle, based on a desire to sound as convincing as possible, but the more one reads, the more one gets the impression that they were haphazard about the whole business: having decided to crucify Sri Lankan officialdom, they suddenly remembered that they might be asked to justify their claims, so they threw in markers of uncertainty at regular intervals.

I explore here the allegations they make about rape and sexual violence, advanced relentlessly as though to push the right buttons with whoever it was supplied false information to Hillary Clinton, for which Patricia Butenis apologized, though without I suspect drawing the attention of her boss to this egregious blunder (or, rather, to the deceit practiced on the poor woman by her trusted speechwriters).

The following extracts make clear the haze of uncertainty in which the Darusman crew steered their unwieldy bark. I have juxtaposed with them an instance of another set of claims inimical toSri Lanka, in which there was bad faith of a more ludicrous but perhaps more honest sort.

Para 152 – there are many indirect accounts reported by women of sexual violence and rape by members of government forces.

Para153 – Many photos and video footage, in particular the footage provided by Channel 4, depict dead female cadre. In these, women are reportedlyshown naked or with underwear withdrawn to expose breasts and genitalia.

This is a strange use of the word reportedly, implying that the Panelists have not seen the footage that shows naked women, or women with withdrawn underwear, whatever that means. Was it the case that they were shy to look at the pictures, or did they look but find it difficult, given their doubtless innocent lives previously, to recognize a naked (or underwear withdrawn) woman, so that they had to rely on reports to interpret what they saw? Or is it simply that they did not bother to look at the pictures and video footage themselves, but relied on yet another network of informants?

The Channel 4 images, with accompanying commentary in Sinhala by SLA soldiers, raise a strong inference that rape or sexual violence may have occurred, either prior to or after execution.

The Panelists have no doubt that the soldiers belong to the Sri Lankan army, but there is only an inference that rape or sexual violence may have occurred, another instance of double distancing.

It is not clear whether the woman appears to be moving, or only her leg, which is reminiscent of the moving leg of a supposed dead man in the Channel 4 video, a movement that led to one of Philip Alstons’s experts (whom he claimed established the authenticity of the video) declaring that ‘it remains uncertain as to what accounts for the movement of this individual’s left leg’ and (with regard to another person it seems), ‘Under normal circumstances and without something maintaining his leg in this position, I would not expect his leg to remain in this position if he were deceased’.

Incidentally, Alston’s casuistry led him to answer this by admitting that there were ‘a small number of characteristics which the experts were not able to explain’, but to claim that ‘Each of these characteristics can, however, be explained in a manner which is entirely consistent with the conclusion that the videotape appears to be authentic’

Even more entertainingly, Alston’s chief expert produced a completely dotty explanation. With regard to the rising leg, the imaginative Mr Spivack says ‘it has not been definitively established whether this person was already deceased, or merely wounded, intoxicated, sleeping, or possibly even uninjured and feigning death after being shot at and missedin order to evade actual injury or death at the hands of a more competent marksman’. (My stresses).

The idea of the wicked people who shot two victims through the head at close quarters having adopted a different approach which led to one of the victims feigning death is almost as bizarre as someone who is sleeping through this whole performance lifting up his leg and then letting it collapse. Clearly Philip Alston had found experts with similar thinking skills to his own.

Alston however was comparatively an honest man and, when he had to bite a bullet, he did so with grit and determination. The Darusman Panelists leave themselves an escape route by refusing to commit themselves, knowing full well that their cheerleaders will claim that they have established guilt without doubt.

The allegations are deemed credible by the Panel. But they realize that they only point to a possible violation, two usages that suggest uncertainty. This uncertainty is reinforced by the ‘may’ in the next clause.

The Panel notes in particular the Channel 4 photographs of what appear to be dead female cadre including video footage in which naked bodies of woman are deliberately exposed accompanied by lurid comments by SLA soldiers raising a strong inference that rape or sexual assault may have occurred prior to execution.

Earlier definitely dead female cadre were claimed to have been depicted, now what is seen only appear to be dead female cadre. Conversely, what were only reportedly shown naked women are now transposed into definitely naked bodies of women. Sri Lankan soldiers continue to be definitely identified, though again there is only a strong inference of rape or sexual assault. Now however it is confined to before execution, whereas previously the possibility of necrophilia was also floated.

There is a strong inference that the Panel swallowed wholesale the whoppers conveyed to them. They may have been bribed or otherwise influenced by former terrorists who have allegedly supplied them with much of their information.

The last paragraph above is totally true. Is there any reason to think it more nonsensical than the statements quoted above?