THE SYSTEM IS BROKEN: 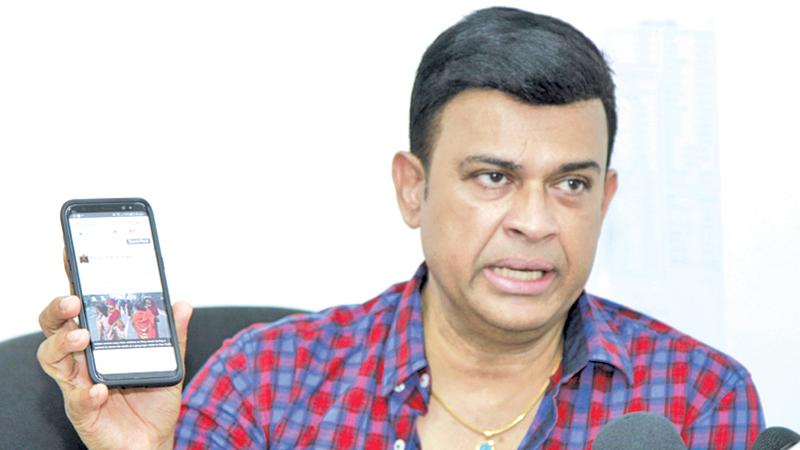 Dissecting malicious prosecutions against the Rajapaksa regime,and others

Those voice recordings, they were no rama lama ding dong. Everybody who is somebody knew all along that the principal author of those clips was a joker, with his biceps mostly lodged in his brain.

But that’s the whole point. Jokers and buffoons took over matters that dealt with the administration of justice and law and order in this country in the five years of Yahapalana rule, and then this was no longer a rama lama ding dong doo-wap. The ramifications were deep going, and had explosive impact.

The tapes are now in the public domain. Amidst the prurient and sickening tone of most of the exchanges that keep the gallery in a permanent state of semi-arousal, the assault on the system is mind numbing.

The lines between the judiciary, executive and the legislature were blurring so markedly that it appeared one political party had taken over the entire law enforcement apparatus. A senior Attorney General’s Department officer Suhada Gamlath had already revealed on public television that he was summoned to Temple Trees and virtually threatened by powerful Ministers of the ruling party, and told with finger wagging gravitas that he has to prosecute certain political opponents, or else.

Malicious prosecution became the name of the game. Suhada Gamlath’s version of law enforcement by Ministerial fiat has been now corroborated not once but many times over by others, and now, in the final coup de grace,in the rama lama ding dong tapes.

The people already had more than a hunch that this was the way things were done. Rama lama ding dong himself — there is no need to mention the name of this popinjay misfit, masquerading as a people’s representative— had contributed to the general idea among the people that Yahapalana was all about victimizing political opponents. Ding dong himself had said that horses cast in gold had been shipped from England for the entertainment of young political scions of the former regime. No horses materialized. He led witch hunts which resulted in the enactment of the absurd, such as the digging out of swimming pools that had gone into disuse, in the pursuit of bags of gold. No gold was found, but a pair of worn out rubber slippers materialized.

But yet, behind the bumbling was utter vicious intent. The voice recordings of last week have revealed the Gestapo style rawness of the drive to discredit political opponents. Nobody can say that ding dong himself was not given a licence to lobby certain key figures in law enforcement and the judiciary to subvert the system and go after political opponents of the former regime.

He was given the go ahead by the UNP. The tapes themselves reveal half of that green lit intent.

Fear was the key to the modus operandi. Police officers were under threat of being victimized and thrown in jail if they did not play along with this operation cross between Inspector Clouseau and Gestapo. Some police officers were in fact flung behind bars on trumped up charges, but that’s another story.

Today, the reputation of law enforcement and the judiciary both lay in tatters as a result. Anyone saying otherwise doesn’t have half a fig leaf to cover their vitals. How could it be otherwise, when several members of judicial community are caught on tape colluding with ding dong in the task of going after the political opponents of the Yahapalana regime?

Where do we begin? Is the reaction to be collectively so stunned by the ugliness of it all that we bury our heads in the sand and pretend that if we act as if it didn’t happen, it really didn’t?

That would be to remove the last struts of support that hoist a creaking, visibly collapsing system of law enforcement and judicial review. There has to be accountability if there is to be any credibility.

Just listen to the rama lama ding dong clips. At one point Mr. ding dong tells a judicial officer that the now President and then ex Defence Secretary Mr. Gotabaya Rajapaksa should be flung behind bars for at least one hour. The judicial officer purported, doesn’t say I warn you, you’d be flung behind bars if you dare influence me. Instead, there is meek ingratiating collusion, and a willingness to go along. Ding dong then says that if Mr. Gotabaya Rajapaksa is not put behind bars, it won’t look good ‘because people would think we are bent on political revenge!’

Alright then. The directive is so obvious that it leaves no wiggle room for explanation. The diktat is clear. We are on a mission of political revenge here, and we need you to give us the legal cover to carry on doing that.

It was that brazen, and that crystal clear — this intent to slash burn and destroy the other side in a game of cynical political monopoly.

The other side of the coin is the manner in which Mr. ding dong and his fellow Gestapo members of Parliament in the then ruling party operated. To this day the principal actor in the ding dong tapes has not said that he would quit politics under weight of the disgrace. A modicum of self respect, a smidgen of propriety cannot be expected from this execrable character.

But, the funny side needs some mention. He feels his flaunted crusader against crime credentials are yet intact. It’s why he has made a lame half hearted and sotto voce claim that he spoke to the judicial officers concerned, because he wanted to ‘contact’ all parties in his quest for justice.

A more comprehensive take down of this crusader mentality should be left for another day, but suffice to say for now that malicious prosecutions don’t count as crusading against crime. But this was the entire reason and methodology behind the Yahapaluwa structure.

In order to stanch the long drought in opposition the UNP in 2015 had no other option than that of manufacturing a canard that Mahinda Rajapaksa regime politicians were all corrupt, and had swindled the State to the tune of billions. So, everyone and particularly the front liners were branded rogues, brigands and murderers.

Once the canard was in operation, and after having squeaked through to victory on the back of Sirisena, which is entirely another story, these people crowned themselves as crusaders against crime, but no crimes materialized. There was no evidence of substantial corruption with which they could hang a dead rat. What Mr. ding dong and his ilk then resorted to was a series of malicious prosecutions, the details of which are now being exposed in the tapes and other exposes such as those of Mr. Gamlath.

Mr ding dong and anybody defending him has to be told that just because you scream somebody is corrupt and go after him with a chainsaw, it doesn’t make you a crusader against crime. But it does make you a criminal.

Mr ding dong has almost certainly proved himself to be a criminal in those taped conversations. His partners in crime who were also party to such malicious prosecutions are criminals too, and so are the police officers and others who partnered these targeted witch hunts.

No doubt this was a dark chapter, in which those who had served the country with distinction, in particular, such as Mr. Gotabaya Rajapaksa, were maliciously hunted down. Rama lama ding dong’s tapes have now given that definitive verdict on the Gestapo tactics of the previous regime.

The masses have been duped. Their leaders have been vilified and persecuted. Mayhem has been unleashed, but most importantly the system has been tampered with to the point to which the people have justifiably lost faith.

It’s a pathetic scorecard of wretchedness, arrogance and misdoing.

The rama lama ding dong tapes may be one party time ding dong to those who are taken up by their prurience. But to all right thinking people who want to hope for a halfway decent future for their kids, the tapes should be the last straw that calls for a total systemic overhaul for the sake of restoration of confidence in all our institutions.