The Pompeo visit and the importance of being earnest 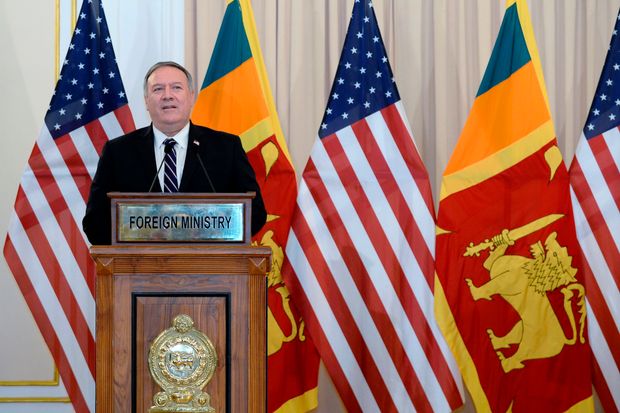 Rohan Samarajiva, during a television discussion recently, opined that most of the work pertaining to bilateral agreements is done by officials of the two particular countries ahead of meetings between heads of states or those between high ranking individuals. The discussion was about Sri Lanka as a battleground for global powers, as indicated by the impending visit of US Secretary of State Mike Pompeo following one by top members of the Chinese Communist Party.

Now this could be true. In fact there were loud noises emanating, interestingly and amusingly, by political parties, groups and activists who either cheered or remained silent when the yahapalana government ‘did business’ with the USA.

Pompeo is here to force Gotabaya Rajapaksa to ink the MCC Compact, some screamed. Those in the government who opposed the MCC Compact such as Wimal Weeranwansa, Sita Arambepola and Udaya Gammanpila were ridiculed. The government was mocked for saying there was no visit planned and then for extending an invite. Not serious stuff in diplomatic affairs but mountains were and will always be made out of molehills.

It was a hurriedly arranged trip, clearly. Pompeo, in an interview with Derana TV said as much: ‘I’m in this region a lot.  I had planned to come here earlier.  The world got away and I had to delay it a bit, so managed to get here now.  I’m thrilled to be here.’

Hurried or not, it was arranged and he did visit. The haste may have prompted a lot of speculation, especially since the Government is yet to act on the recommendations of the Gunaruwan Committee with respect to the MCC.

However, if indeed it was a hastily arranged trip, then Samarajiva’s general observation does not have credence. On the other hand, it doesn’t take much to twist arms and let us not forget that we are talking of a country that has made arm-twisting a cardinal principle of engagement with countries such as Sri Lanka. Failing that, they do have other means such as threats, sanctions and of course bombs.

We didn’t see anything being signed. We didn’t hear or read either the Government or the US Embassy or Pompeo himself talking of any concrete agreement being signed.

Pompeo’s sum-up following talks with the President, Prime Minister and the Minister of Foreign Affairs is available in the Embassy’s official statements. Pompeo himself ventured to nutshell it in a  Rupavahini interview where he was queried on the MCC:

‘Look, the MCC is one strand of an offer that we made.  If the Sri Lankan people want that, great.  If they choose to go another path, that’s certainly fine.  There are so many important things that we can work on together to make this partnership important, and for each of our two countries, to be an important part of this region which delivers on these democratic visions that we share so closely.’

It doesn’t mean the MCC is off, clearly. However, Pompeo has essentially stated that there was nothing more, nothing less, than the exchange of greetings, mutual reaffirmation of friendship, un-detailed pledges of cooperation etc. Chit-chat, essentially.

Now contrast this with what Pompeo ‘achieved’ in India just before visiting Sri Lanka. He got the Basic Exchange and Cooperation Agreement (BECA) off the ground. Now BECA is about geospatial intelligence, and sharing information on maps and satellite images for defense. A foothold, if ever there was one. Of course, it’s about China and as such, considering India’s overwhelming economic and military presence in the region, it is not surprising that Pompeo’s visit was seen as a quick stopover to orchestrate an ‘easy’ add-on to a list of accomplishments in the line of enhancing strategic footprint.

Didn’t happen. Could have happened and probably would have happened if the yahapalanists were in power, considering the unenviable track record of servility to the USA that sticks like a sore thumb from the curriculum vitae of several leaders such as Mangala Samaraweera and Ranil Wickremesinghe.

That said, one thing is clear. President Gotabaya Rajapaksa said it as it is. He didn’t beat around the bush. He didn’t promise the undeliverable. He didn’t say things he didn’t mean. He articulated clearly and concisely.

He acknowledged difficulties and sought assistance. He stated what kind of assistance is needed and in what form. He stated Sri Lanka’s stance vis-a-vis India’s concerns: do nothing to jeopardize India’s security. With respect to the much-hyped ‘looming war between the USA and China’ (a way, by the way, is not new, US troops having helped Chiang Kai-shek’s men loot the Forbidden Palace and flee to Taiwan), President Rajapaksa clearly said that Sri Lanka chooses neutrality and that relations with one country is absolutely independent of ties with another. China, he clearly mentioned, was a longtime friend.

While it is true that Pompeo later badmouthed China is what is a case study on how not to be a diplomat and how not to do diplomacy, he did not take umbrage to Sri Lanka’s position.

Maybe Pompeo (and Washington) feels that getting India aboard (or boarding India, as the case may be) is the big catch and that Sri Lanka is a prize which is trivial in contrast or a catch that will come its way sooner or later. Maybe Pompeo was just venting for the benefit of any on-the-fence voters whose Sino-phobia just might buy Donald Trump some votes. He would know.

President Rajapaksa said it as it is. He was earnest. He could have acted the way he did when Bernard Kouchner and David Miliband turned up at the time he was Secretary, Ministry of Defence. He could have submitted the way the yahapalanists (happily) did or trip himself the way Mahinda Rajapaksa did with his infamous ‘13+ pledge’ to an India that has no moral authority to demand anything related to the Indo-Lanka Accord of 1987 (having failed to keep her end of the bargain and indeed, having Sri Lanka deliver that as well — putting an end to terrorism).

No. Gotabaya Rajapaksa stuck to the basics. We don’t know what the implications are, but we do know that he could have done much worse and we do know that playing vassal to the USA has not got anyone or any country very far.