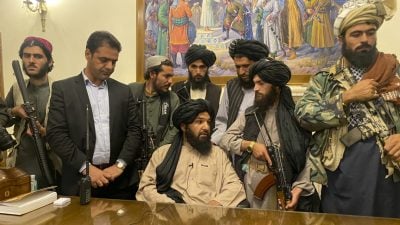 When the tears dry, it is worth considering why there is so much upset about the fall of Kabul (or reconquest) by the Taliban and the messy withdrawal of US-led forces. A large shield is employed: women, rights of the subject, education. Remove the shield, and we are left with a simple equation of power gone wrong in the name of paternalistic warmongering.

The noisiest group of Afghanistan stayers are the neoconservatives resentful because their bit of political real estate is getting away. In being defeated, they are left with the task of explaining to the soldiery that blood was not expended in vain against a foe they failed to defeat. “You took out a brutal enemy,” goes a statement from US President George W. Bush and his wife Laura, “and denied Al Qaeda a safe haven while building schools, sending supplies, and providing medical care.” The couple throw in the contribution of Dr. Sakena Yacoobi of the Afghan Institute of Learning, behind the opening of “schools for girls and women around the nation.”

Paul Wolfowitz, who served as Bush’s deputy defence secretary, is less sentimental in his assessment of the Afghanistan fiasco. To Australia’s Radio National, he was unsparing in calling the victors “a terrorist mob that has been hating the United States for the last 20 years.” They had provided the launching ground for “one of history’s worst attacks on the United States” and were now “going to be running that bit of hostile territory.”

Being in Afghanistan, he asserted, was not costly for the occupiers – at least to the US. It made good sense in preventing it from “once again becoming a haven for terrorists”. For the last year and a half, there had not been a single American death. He chided the simpletons at the Chicago Council of Global Affairs who dared survey Americans with the question, “Would you like to leave [Afghanistan] and get out?” They would have been far better framing it differently: “Do you support withdrawal if it means the country is going to be overrun by the same people who hated us 20 years ago and from where an attack that killed 3,000 Americans took place”.

To talk about “endless wars” was also something to avoid. In a reminder that the US imperial footprint remains global, Wolfowitz drew attention to the fact that Washington was hardly going to withdraw from South Korea, where it was still officially at war with the North. It kept troops in countries it had previously been at war with: Germany and Japan. Americans, he lamented, had not “been told the facts” by their politicians.

Exiting Afghanistan: Biden Sets the Date
Boiled down to its essentials, such a view has little time for Afghans with a country “more or less ungovernable for long periods of time”. (What uncooperative savages.) The Obama administration’s deployment of 100,000 soldiers had been an “overreach” with unclear intention. It was far better to treat Afghanistan as a state to contain with “a limited commitment” of US forces rather than “extending to the idea that Afghanistan would become a latter-day Switzerland.” Ringing the real estate, not advancing the people, mattered.

Former US National Security Advisor John Bolton, a caricature of US interventionist policies, never had much time for the withdrawal argument, either. Earlier in August, with the Taliban humming along with speed in capturing a swag of provincial cities, Bolton warned that it was “literally [President Joe] Biden’s last chance to reverse his and Trump’s erroneous withdrawal policy. When the Taliban wins, it compromises the security of all Americans.”

Another voice from the neoconservative stable advocating the need for a continued boot print of US power was Max Boot, who thought it nonsensical to keep US troops in Iraq while withdrawing them from Afghanistan. US forces needed, he wrote in the Irish Independent (Jul 29) “to stay in both countries to prevent a resurgence of the terrorist threat to the US and its allies.” The “imperative” to prevent both countries from becoming “international terrorist bases” remained, but only one had an adequate military presence to provide insurance. Decent of Boot to show such candour.

The British, long wedded to the idea of empire as gift and necessity, have also piled onto the wagon of stayers, saying less about the merits of protecting Afghan citizens than keeping trouble boxed and localised. “We will run the risk of terrorist entities re-establishing in Afghanistan, to bring harm in Europe and elsewhere,” feared General Sir Richard Barrons. “I think this is a very poor strategic outcome.”

British Conservative MP Tobias Ellwood, a former captain in the Royal Green Jackets, went further by suggesting that plucky Britain best go it alone in the face of foolhardy US withdrawal. “Just because the US chose to depart does not mean we should slavishly follow suit,” he exhorted. “Would it not make sense to stay close to the Afghan people given the importance of this bit of real estate?”

The one who tops all of this off must be former UK Prime Minister Tony Blair, always one given to evangelising wars waged in the name of a sinister, tinfoil humanitarianism. As executive of an institute bearing his name (modest to a fault), he railed against a withdrawal executed “in obedience to an imbecilic political slogan about ending ‘forever wars’”. Like Wolfowitz, he dismissed the use of such terms and comparisons, noting the diminishing troop deployment on Afghan soil and the fact that “no allied soldier had lost their life in combat for 18 months.”

Despite the withdrawal, Blair suggested that options were available to “the West” which needed some “tangible demonstration” that it was not in “retreat”. A “list of incentives, sanctions and actions” had to be drawn up against the Taliban. In doing so, his motivation was simple: that these turbaned fanatics represented a strategic risk, part of “Radical Islam” that had been “almost 100 years in gestation”.

Far from ditching the prospect for future interventions, the high priest of illegal war is all-embracing of the formula. “Intervention,” he opines, “can take many forms. We need to do it learning the proper lessons of the past 20 years according not to our short-term politics, but our long-term strategic interests.” Be fearful for Afghanistan’s sovereignty, and woe to those lessons.

Dr. Binoy Kampmark was a Commonwealth Scholar at Selwyn College, Cambridge. He lectures at RMIT University, Melbourne. He is a frequent contributor to Global Research and Asia-Pacific Research. Email: bkampmark@gmail.com