The National Endowment for Vexatious Interference (USA) and its local pawns 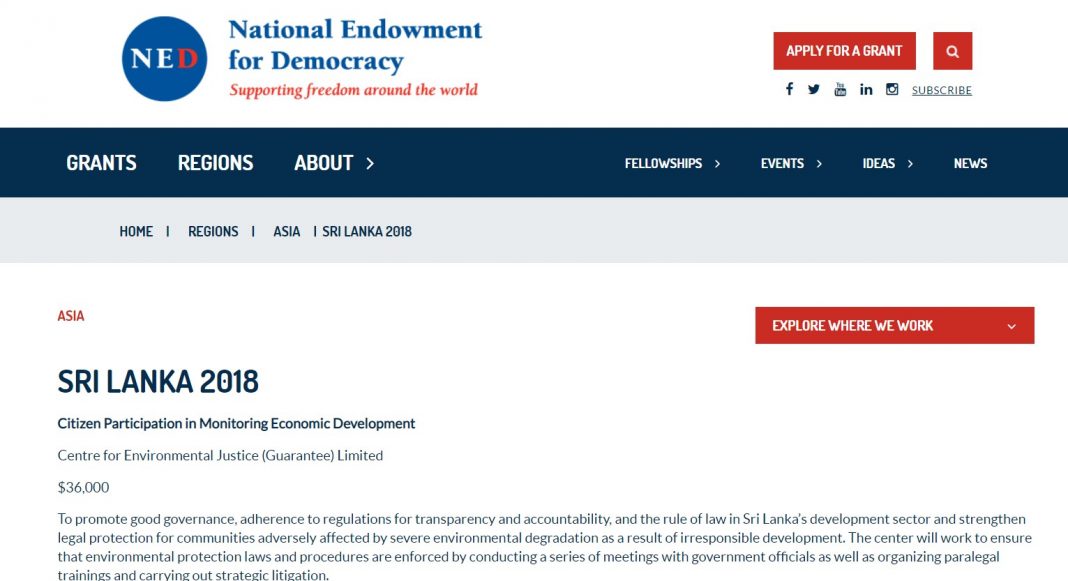 Did you just google ‘National Endowment for Vexatious Interference’? If so, you would be disappointed. There’s no such thing. This is not because no one in this world interferes. People interfere. Countries too. Interfering is not something the interfered enjoy. It implies ‘without invitation.’ There is something vexatious about it and as such, the term vexatious interference is a bit ‘extra.’ The reason for the absence of an endowment of that name is simple: creatures who are bad, vicious, bloodthirsty etc., with a penchant for belligerence, theft, plunder, murder etc., don’t wear such labels. They would rather call themselves benign, generous, selfless etc., and wear pretty clothes with angel-wings attached to shoulders.

The National Endowment for Democracy. Now that would come up on google. It is a US Government think-tank set up to support freedom around the world. Think of a word without racial discrimination, xenophobia and intolerance — well, that’s the kind of place that the NED wants or rather says it stands to help create.

The USA and freedom. Isn’t that something! One doesn’t have to ask how the USA voted on Resolution 72/157 to understand US hum-buggery in its domestic and international engagements. The death, dismemberment, destruction and displacement engineered by the US is too evident to warrant such digs. It’s a rogue state if ever there was one. Nevertheless, since the USA has often used the United Nations to trot around in angel-garb, it’s worth a revisit.

In other words, these countries thumbed their proverbial noses at the global all for the elimination of racism, racial discrimination, xenophobia and related intolerance. In other words, their noises about such things is nothing less than political cacophony masking the pursuit of interests that have nothing to do with supporting freedom

It was at its 72nd session in December 2017 the General Assembly adopted Resolution 72/157. It was ‘a global call for concrete action for the total elimination of racism, racial discrimination, xenophobia and related intolerance and the comprehensive implementation of and follow-up to the Durban Declaration and Programme of Action.’ Furthermore, it requested the Human Rights Council ‘to continue to pay attention to the situation regarding racial equality in the world.’

Now just the other day, the HRC passed a resolution against Sri Lanka. The prime mover of that exercise was the UK, operating as the proxy of the USA of course. France and Germany stood with the UK. Interestingly (and tellingly!) France, Germany and the UK were among the 14 countries that voted against Resolution 72/157, along with the USA (aha!), Australia (aha!), the Netherlands (aha!), Israel (aha!) and Canada (aha!). ‘Aha’ too regarding the fact that all other European countries abstained!

In other words, these countries thumbed their proverbial noses at the global all for the elimination of racism, racial discrimination, xenophobia and related intolerance. In other words, their noises about such things is nothing less than political cacophony masking the pursuit of interests that have nothing to do with supporting freedom. In other words, in the case of the USA for example, the NED is at odds (thematically and in practice) with Washington’s policy prerogatives.

Well, ‘at odds’ on paper. Dig a little deeper and one finds absolute harmony. The NED is notorious for pumping dollars into groups, parties and ‘movements’ operating against governments that do not tow the Washington line. Sure, they say it’s for democracy but that’s hogwash. The USA never supports groups objecting to US-friendly despots, military juntas and monarchies who mow down anything associated with freedom and democracy.

Alright. Don’t believe me. You can, however, take it from the horse’s mouth, so to speak.Carl Gershman, the NED’s co-founder once told the New York Times that a lot of what the NED does was previously done covertly by the CIA. The CIA does a lot overtly and covertly, this we know. So why have the NED in the first place? Gershman gave the following explanation: ‘It would be terrible for democratic groups around the world to be seen as subsidised by the CIA.’ Apparently this is why the endowment was created.

Check this list and shake it twice: https:///www.ned.org/region/asia/sri-lanka/2020. Millions of dollars have been pumped into various ‘civil society organisations,’ you will find.

Now if you want to add two to two and obtain four (in a political sense), just check out those who have crawled out of the wood works to stomp around and beat their chests indignantly over Port City. Check the names and what kinds of organisations they’ve taken up residence in over the years. Now check who has funded these organisations. Well, you can also ask what they’ve done when the yahapalana regime was engaged in vexatious operations regarding entities such as the Port City and the Hambantota Port, if you want a good measure of malice, political intent and hum-buggery.

Law and Society Trust (LST). Have you heard of them? Centre for Policy Alternatives (heard of them)? They’re up in arms (now, as opposed to when the Yahapalanists were at China’s door with the begging bowl following Brexit — when Ranil Wickremesinghe suddenly realised there’s an ‘East’ in the world) against the Port City Economic Commission. LST obtained bucks from the NED. So did the CPA.

Did you add two to two? Did you get four? Tells a story, doesn’t it? Tells a story but it’s not about justice, democracy, rights and other such lovely things. Chinese interference, did someone squeak? Obviously, there’s a Chinese footprint here. There’s a US footprint too and it’s getting erased and maybe this is why Alaina B Teplitz is livid and why outfits such as the NED are in the picture. We would rather not have any footprints but ours, obviously, but those who have walked in and kicked us in the gut have no moral authority to complain, right? And neither do those whose rights-angsts are fed by rights-offenders.

malindasenevi@gmail.com. www.malindawords.blogspot.com.
[Malinda Seneviratne is the Director/CEO of the Hector Kobbekaduwa Agrarian Research and Training Institute. These are his personal views.]