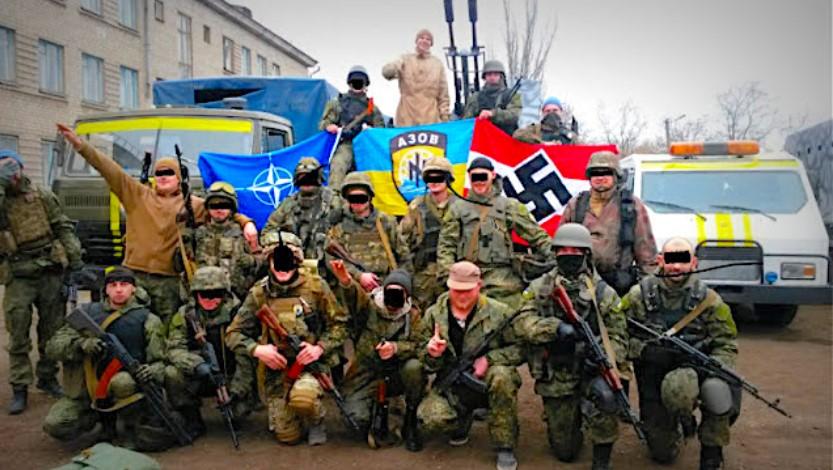 As the Ukrainian army squares off against ultra-right and neo-Nazi militias in the west and violence against ethnic Russians continues in the east, the obvious folly of the Obama administration’s Ukraine policy has come into focus even for many who tried to ignore the facts, or what you might call “the mess that Victoria Nuland made.”

Assistant Secretary of State for European Affairs “Toria” Nuland was the “mastermind” behind the Feb. 22, 2014 “regime change” in Ukraine, plotting the overthrow of the democratically elected government of President Viktor Yanukovych while convincing the ever-gullible U.S. mainstream media that the coup wasn’t really a coup but a victory for “democracy.”

To sell this latest neocon-driven “regime change” to the American people, the ugliness of the coup-makers had to be systematically airbrushed, particularly the key role of neo-Nazis and other ultra-nationalists from the Right Sektor. For the U.S.-organized propaganda campaign to work, the coup-makers had to wear white hats, not brown shirts.

So, for nearly a year and a half, the West’s mainstream media, especially The New York Times and The Washington Post, twisted their reporting into all kinds of contortions to avoid telling their readers that the new regime in Kiev was permeated by and dependent on neo-Nazi fighters and Ukrainian ultra-nationalists who wanted a pure-blood Ukraine, without ethnic Russians.

Any mention of that sordid reality was deemed “Russian propaganda” and anyone who spoke this inconvenient truth was a “stooge of Moscow.” It wasn’t until July 7 that the Times admitted the importance of the neo-Nazis and other ultra-nationalists in waging war against ethnic Russian rebels in the east. The Times also reported that these far-right forces had been joined by Islamic militants. Some of those jihadists have been called “brothers” of the hyper-brutal Islamic State.

Though the Times sought to spin this remarkable military alliance neo-Nazi militias and Islamic jihadists as a positive, the reality had to be jarring for readers who had bought into the Western propaganda about noble “pro-democracy” forces resisting evil “Russian aggression.”

Perhaps the Times sensed that it could no longer keep the lid on the troubling truth in Ukraine. For weeks, the Right Sektor militias and the neo-Nazi Azov battalion have been warning the civilian government in Kiev that they might turn on it and create a new order more to their liking.

Clashes in the West

Then, on Saturday, violent clashes broke out in the western Ukrainian town of Mukachevo, allegedly over the control of cigarette-smuggling routes. Right Sektor paramilitaries sprayed police officers with bullets from a belt-fed machine gun, and police backed by Ukrainian government troops returned fire. Several deaths and multiple injuries were reported.

Tensions escalated on Monday with President Petro Poroshenko ordering national security forces to disarm “armed cells” of political movements. Meanwhile, the Right Sektor dispatched reinforcements to the area while other militiamen converged on the capital of Kiev.

While President Poroshenko and Right Sektor leader Dmitry Yarosh may succeed in tamping down this latest flare-up of hostilities, they may be only postponing the inevitable: a conflict between the U.S.-backed authorities in Kiev and the neo-Nazis and other right-wing fighters who spearheaded last year’s coup and have been at the front lines of the fighting against ethnic Russian rebels in the east.

The Ukrainian right-wing extremists feel they have carried the heaviest burden in the war against the ethnic Russians and resent the politicians living in the relative safety and comfort of Kiev. In March, Poroshenko also fired thuggish oligarch Igor Kolomoisky as governor of the southeastern province of Dnipropetrovsk Oblast. Kolomoisky had been the primary benefactor of the Right Sektor militias.

So, as has become apparent across Europe and even in Washington, the Ukraine crisis is spinning out of control, making the State Department’s preferred narrative of the conflict that it’s all Russian President Vladimir Putin’s fault harder and harder to sell.

How Ukraine is supposed to pull itself out of what looks like a death spiral a possible two-front war in the east and the west along with a crashing economy is hard to comprehend. The European Union, confronting budgetary crises over Greece and other EU members, has little money or patience for Ukraine, its neo-Nazis and its socio-political chaos.

America’s neocons at The Washington Post and elsewhere still rant about the need for the Obama administration to sink more billions upon billions of dollars into post-coup Ukraine because it “shares our values.” But that argument, too, is collapsing as Americans see the heart of a racist nationalism beating inside Ukraine’s new order.

Much of what has happened, of course, was predictable and indeed was predicted, but neocon Nuland couldn’t resist the temptation to pull off a “regime change” that she could call her own.

Her husband (and arch-neocon) Robert Kagan had co-founded the Project for the New American Century in 1998 around a demand for “regime change” in Iraq, a project that was accomplished in 2003 with President George W. Bush’s invasion.

As with Nuland in Ukraine, Kagan and his fellow neocons thought they could engineer an easy invasion of Iraq, oust Saddam Hussein and install some hand-picked client in Iraq, Ahmed Chalabi was to be “the guy.” But they failed to take into account the harsh realities of Iraq, such as the fissures between Sunnis and Shiites, exposed by the U.S.-led invasion and occupation.

In Ukraine, Nuland and her neocon and liberal-interventionist friends saw the chance to poke Putin in the eye by encouraging violent protests to overthrow Russia-friendly President Yanukovych and put in place a new regime hostile to Moscow.

Carl Gershman, the neocon president of the U.S.-taxpayer-funded National Endowment for Democracy, explained the plan in a Post op-ed on Sept. 26, 2013. Gershman called Ukraine “the biggest prize” and an important interim step toward toppling Putin, who “may find himself on the losing end not just in the near abroad but within Russia itself.”

For her part, Nuland passed out cookies to anti-Yanukovych demonstrators at the Maidan square, reminded Ukrainian business leaders that the U.S. had invested $5 billion in their “European aspirations,” declared “fuck the EU” for its less aggressive approach, and discussed with U.S. Ambassador Geoffrey Pyatt who the new leaders of Ukraine should be. “Yats is the guy,” she said, referring to Arseniy Yatsenyuk.

Nuland saw her big chance on Feb. 20, 2014, when a mysterious sniper apparently firing from a building controlled by the Right Sektor shot and killed both police and protesters, escalating the crisis. On Feb. 21, in a desperate bid to avert more violence, Yanukovych agreed to a European-guaranteed plan in which he accepted reduced powers and called for early elections so he could be voted out of office.

But that wasn’t enough for the anti-Yanukovych forces who led by Right Sektor and neo-Nazi militias overran government buildings on Feb. 22, forcing Yanukovych and many of his officials to flee for their lives. With armed thugs patrolling the corridors of power, the final path to “regime change” was clear.

Instead of trying to salvage the Feb. 21 agreement, Nuland and European officials arranged for an unconstitutional procedure to strip Yanukovych of the presidency and declared the new regime “legitimate.” Nuland’s “guy” Yatsenyuk became prime minister.

While Nuland and her neocon cohorts celebrated, their “regime change” prompted an obvious reaction from Putin, who recognized the strategic threat that this hostile new regime posed to the historic Russian naval base at Sevastopol in Crimea. On Feb. 23, he began to take steps to protect those Russian interests.

What the coup also did was revive long pent-up antagonisms between the ethnic Ukrainians in the west, including elements that had supported Adolf Hitler’s invasion of the Soviet Union during World War Two, and ethnic Russians in the south and east who feared the anti-Russian sentiments emanating from Kiev.

First, in Crimea and then in the so-called Donbas region, these ethnic Russians, who had been Yanukovych’s political base, resisted what they viewed as the illegitimate overthrow of their elected president. Both areas held referenda seeking separation from Ukraine, a move that Russia accepted in Crimea but resisted with the Donbas.

However, when the Kiev regime announced an “anti-terrorism operation” against the Donbas and dispatched neo-Nazi and other extremist militias to be the tip of the spear, Moscow began quietly assisting the embattled ethnic Russian rebels, a move that Nuland, the Obama administration and the mainstream news media called “Russian aggression.”

Amid the Western hysteria over Russia’s supposedly “imperial designs” and the thorough demonizing of Putin, President Barack Obama essentially authorized a new Cold War against Russia, reflected now in new U.S. strategic planning that could cost the U.S. taxpayers trillions of dollars and risk a possible nuclear confrontation.

Yet, despite the extraordinary costs and dangers, Nuland failed to appreciate the practical on-the-ground realities, much as her husband and other neocons did in Iraq. While Nuland got her hand-picked client Yatsenyuk installed and he did oversee a U.S.-demanded “neo-liberal” economic plan slashing pensions, heating assistance and other social programs the chaos that her “regime change” unleashed transformed Ukraine into a financial black hole.

With few prospects for a clear-cut victory over the ethnic Russian resistance in the east and with the neo-Nazi/Islamist militias increasingly restless over the stalemate the chances to restore any meaningful sense of order in the country appear remote. Unemployment is soaring and the government is essentially bankrupt.

The last best hope for some stability may have been the Minsk-2 agreement in February 2015, calling for a federalized system to give the Donbas more autonomy, but Nuland’s Prime Minister Yatsenyuk sabotaged the deal in March by inserting a poison pill that essentially demanded that the ethnic Russian rebels first surrender.

Now, the Ukraine chaos threatens to spiral even further out of control with the neo-Nazis and other right-wing militias supplied with a bounty of weapons to kill ethnic Russians in the east turning on the political leadership in Kiev.

In other words, the neocons have struck again, dreaming up a “regime change” scheme that ignored practical realities, such as ethnic and religious fissures. Then, as the blood flowed and the suffering worsened, the neocons just sought out someone else to blame.

Thus, it seems unlikely that Nuland, regarded by some in Washington as the new “star” in U.S. foreign policy, will be fired for her dangerous incompetence, just as most neocons who authored the Iraq disaster remain “respected” experts employed by major think tanks, given prized space on op-ed pages, and consulted at the highest levels of the U.S. government.

[For more on these topics, see Consortium News’s “Obama’s True Foreign Policy Weakness” and “A Family Business of Perpetual War.”]

The late investigative reporter Robert Parry broke many of the Iran-Contra stories for The Associated Press and Newsweek in the 1980s. He began Consortium News in 1995.