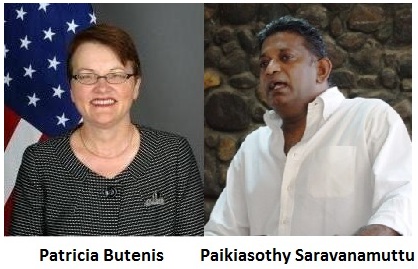 Yesterday I wrote a satirical account of a meeting held at the house of the American Ambassador, reportedly at the request of Dr Paikiasothy Saravanamuttu of the Centre for Policy Alternatives. In noting some versions of stories in circulation about what had been going on there, and why, I had based my account on what Jehan Perera had said to the newspaper which had leaked the story, namely that the discussion was about how the Report of the Darusman Panel could be made use of for reconciliation, instead of for ‘division and polarization’.

I was naïve. I have since found out that there was a strong school of thought, reported as extremist or hardline, which had intended the discussion to be about how the Report could be used to precipitate an external War Crimes investigation. This view had been expressed forcefully, though I was assured that none of the Ambassadors present had taken that line.

I then asked whether that line had been pushed purely by the Non-Governmental Organizations present, which the newspaper report had indicated were purely Sri Lankan. This would not have surprised me given the divisive and polarizing agenda of many of those cited as present. In my take-off of the Darusman Report, I had noted earlier that ‘The failure of Ambassador Butenis to invite anyone from government, or any NGOs not overtly hostile to government, for a meeting supposedly dedicated to reconciliation points to a possible violation of the responsibilities and obligations of diplomats’.

But I was not only being naïve now, I was also being careless. The newspaper had mentioned that UN officials were also present, which had slipped my attention. It was reported that these officials had been amongst the hardliners, along with some junior officials from embassies, in addition to some of the Sri Lankan NGO representatives.

This highlights serious questions, which I should have raised previously. Who were the UN officials present?  I have long known the Acting UN Resident Representative, Adnan Khan and, though I have not met him for a very long time, my recollection is that he is unlikely to have been present at such a meeting. I am sorry to say, since I would like to give Ambassador Patricia Butenis the doubt, that I suspect she would not have invited him, though I hope she thought of doing so and had simply been dissuaded by those who had been instrumental in getting her to have such a meeting (assuming that she had not been the moving spirit herself).

It is vital that our Ministry of External Affairs immediately call in Mr Khan, and find out whether he or any of the Heads of UN agencies had been present at the meeting. The Ministry should also find out who from the UN had attended the meeting, and whether they had done so officially, as representing the United Nations, with appropriate authorization from those to whom they report. I am assuming that these individuals report to UN Heads of Agencies, and the Resident Representative, in Sri Lanka.

The Head of the UN should be told that it is not appropriate for anyone to have attended such a meeting, to discuss further action on a Report issued from the office of the Secretary General. Even if they might claim to have attended as individuals, the newspaper report makes it clear that they were seen as attending as UN officials.

It is vital that the Ministry of External Affairs find out about this because we are well aware that some individuals working for the UN were busily subverting the good work that the senior members of the organization were attempting to do in Sri Lanka. I have indeed frequently cited the information given me by journalists in explaining why they attributed to the UN statements that senior and responsible officials of the UN had denied. What I have written previously, in an article (available on my blog www.rajivawijesinha.wordpress.com) entitled ‘Aid Agency Abuse of the Media’, may be worth citing at length here –

What struck me most however in the discussions was that they justified stories I pointed out were false on the grounds that they had received the information from officials on the ground, in what seemed several cases from the United Nations. When I pointed out that the senior leadership of the UN had repudiated these stories, the response was that younger officials sometimes felt they had to speak out because their superiors were seen as too close to the government.

I told the UN when I was back in Colombo that this was an unexpected compliment from our point of view. I would still like to think it is true and – though an Indian journalist warned me that sometimes the leadership of the UN said different things to different people – in general I believe most of the leadership with which we have to deal has been quite positive, and certainly opposed to terrorism, unlike the situation that obtained some time back. But there is a problem in that they do not categorically refute the misleading information provided by their underlings, and thus contribute to the multiple suspicions that abound in what should be a straightforward situation.

Journalists of course have different perspectives and, since their primary obligation is not to the people of the country they are serving in, they can privilege their fraudulent sources. In one case, though I was told that a particular story had been subsequently recognized as untrue, and the source for that would not be trusted again, there was no inclination to provide a correction. And by and large my point that, unless they referred to ‘an employee of the UN’ rather than ‘the UN’, they were in danger of reducing the effectiveness of the UN, was not accepted. Such precision would obviously make the story less effective, so in essence those within the UN system who wish to subvert it have a free rein.

Given such a situation, it is vital that our Ministry of External Affairs work together with the UN leadership to stop this rot. It is also important that one or both of these questions the American Ambassador on why she had invited particular individuals, and whether had she done so in terms of their responsibilities to the UN or otherwise. Much as I love the lady, I believe she is now in danger of rousing the suspicions she created in her last posting, Bangladesh, where reportedly ‘Dr. Abdullah Dewan Professor of Economics at Eastern Michigan University and a Bangladeshi American said: “To judge objectively, there was no “misunderstanding” on our part and we find that she was not just “outspoken”- Ms. Butenis openly meddled, apparently beyond her mandated duty, in the internal affairs of a sovereign country and made it look like a client state of America.”

In Bangladesh the claim was that she was promoting advocates of terror. While she could claim she was advocating inclusivity, I begin to wonder whether she was not proceeding on the old fatal CIA line, that those who shared the particular interests of the Americans at any stage should be promoted, regardless of the consequences – a policy we have seen fulfilled with disastrous effect in Afghanistan, when the Taleban and even Al Qaeda were used to get rid of the Soviet backed regime.

I hope nothing so dramatic is happening here. But whereas yesterday I thought the meeting Ambassador Butenis had arranged was in response to Dr Saravanamuttu, the information I had missed out on, this information that suggests use of the UN as a body as a tool through encouragement of individuals in it with personal agendas, has led me to find out more about the lady, and what I discovered was worrying. She may not be Robert Blake, but certainly she is too bright and able to be simply a tool of Dr Saravanamuttu and the other hardliners at her meeting.

In case I seem too critical of the United States , I should add that there was one piece of good news. I had been worried about Dr Paul Carter, the head of the political section of the embassy, with its close contacts with the JVP, on the lines of those sketched out in the article on Bangladesh with bodies one might have thought the United States was wary of. I felt that, whether arising or not from his putative passionate commitment to human right, his bizarre sympathy for Sarath Fonseka and his continuing close association with Dr Saravanamuttu did not bode well for pluralism and peace in Sri Lanka.

But reportedly Dr Carter was not amongst the hardliners, or rather, he said nothing, confining himself to taking down notes. Those notes I assume have now been sent to Washington and will form part of the briefing received by Robert Blake, and perhaps even conveyed to Hillary Clinton, if we are important enough for her at this stage.

It would be a great pity if those notes suggested that this was a representative gathering of Sri Lankans, and that the views of the UN were also presented. I had long wondered why Hillary Clinton was wrongly briefed about rape being used as a weapon of war in Sri Lanka, a mistake for which Ambassador Butenis apologized, though there was no evidence that Hillary Clinton’s mindset had been adjusted, nor or any inquiry into how such a gaffe had occurred.

The frequent references to rape in the Darusman Report, always described in very tentative terms as though to make clear that this is now simply a weapon of war in the conflict the Report seems to want to provoke rather than a serious concern, raise my worries again. Previously I had assumed that Mrs Clinton had been misled by old information lying in US State Department files, by those more idealistic souls who found it and cleansed their minds of the fact that in the old days Sri Lanka was seen by the United States as a compliant ally, and such information should not be used against us.

That was worrying enough. However I now fear that the purveyors of false information exist in the here and now, and that what they say may be being conveyed to Washington with the use of designations that belie the absence of responsibility and accountability. Nothing can be done about the Sri Lankan organizations that seem responsible only to those who fund them, given the continuing incompetence of Sri Lankan agencies to ensure accountability. But I can only hope that Adnan Khan, if he has not changed from the old days when we worked well together, will make the position clear not only to Ambassador Butenis but also to the senior officials in the United Nations – and that he will make clear to those UN officials who attended the meeting at the Ambassador’s residence that they need to understand for which institution they work, and that it cannot continue to speak with a forked tongue.