The hydra against the behemoth 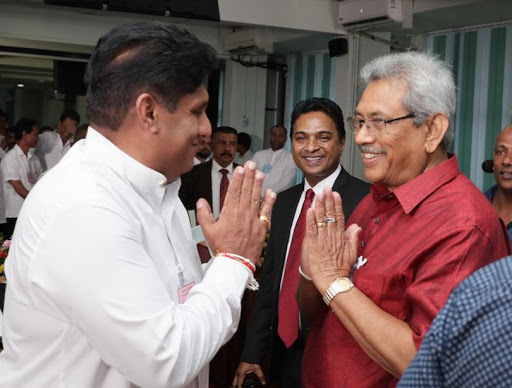 The issue with the Samagi Jana Balavegaya, as the head of the Opposition in the current parliament of Sri Lanka, is that it is a many-headed hydra posing a challenge to a formidable behemoth.

Mano Ganesan’s bickering and grumbling over the National List slots, and his open threat of moving into a separate corner in parliament with 14 others, did not spell out a propitious beginning for an anti-government front. One can’t be faulted for thinking that such disputes will not end. The first task of the Opposition, then, is to stamp out disunity.

But to stamp out disunity, there must be a broad ideological consensus. It’s the sort of all encompassing consensus that the governing party has embraced, as spelt out in Gotabaya Rajapaksa’s policy statement read out in parliament.

The issue with political hydras is that they never seem to agree on one thing or another. In the case of the SJB, lack of consensus has distracted it from spelling out what direction it is headed, and what values it stands for. The government does not suffer from this dilemma or issue. The Opposition does. To me that’s a bigger threat to democracy than governmental overreach.

We saw, in the opening session of the new parliament itself, the new mask that the SJB is trying to put on. Manusha Nanayakkara, an ex-Rajapaksa stalwart, was the only MP in the parliament to directly confront MP Wigneswaran’s remarks. Whether or not the ex-Chief Minister’s remarks were worthy of condemnation is grist for another article. What matters is who made the critique, and from what party. It was neither the Yuthukama nor the Viyathmaga stalwarts, nor was it the likes of Wimal Weerawansa and Udaya Gammanpila. Nor, for that matter, was it Champika Ranawaka.

Sajith Premadasa is trying to court the UNP’s lost Sinhala vote. The UNP’s lost Sinhala vote has been lost for over a decade and a half. It is never going to come back unless Sajith and his allies espouse a new ideology that addresses the aspirations of the ethnic majority as well as the aspirations of other communities. Playing idealist politics is not going to achieve that, for Sajith or anyone else trying to mount an effective front against the government. Harsh realism, pragmatism, and compromise are the only way about it. Whether the SJB has or has not understood this is something only time can tell us. What is important is that it is crucial, if not critical, that the Sajith faction understands it.

As of now, the only mainstream party that’s shown itself strong enough to stand up for the dignity of this country, courting support across not just Sinhala Buddhists but the minorities as well – Catholics across the coastal belt, Tamils from the north and the hill country, and a not insignificant section of the Muslim crowd – is the SLPP, and the only man who has shown himself capable of facing that challenge is Gotabaya Rajapaksa. Any Opposition that fails to note this can do so only at the cost of its very existence.

Hence the biggest liability the SJB can face is not its attempt to turn into a “GR Lite” or “MR Lite” alliance, but its capitulation in the face of those individuals who and groups that dictated, if not formulated, the Chamberlainesque ideology of the parent party. So long as people continue to believe that the SJB is a mere breakaway faction of the UNP espousing the UNP’s values (viewed as anti-Sinhala by a sizeable Sinhala crowd), they will prefer the government to the Opposition.

Thus I agree with Dr Dayan Jayatilleka when he refutes commentators who paint the SJB as another offshoot of Ranilism. Given that these were the same commentators who ridiculed the Joint Opposition, seeing nothing in it that could claim a third force status (only to realise that it could, as it did, clinch the top spot on the electoral map), Jayatilleka is justified in his critique. To continue to say that all hope is lost, that the Opposition is a pale reflection of a monolithic regime, is to commit the same mistake these commentators committed with regard to Gotabaya Rajapaksa’s presidential prospects not too long ago.

What Sajith is trying to do is “Sinhalise” and also “multiculturalise” the Opposition. The first mistake made by what my friend Hafeel Farisz once derisively called “coffee shop liberals” is assuming that addressing the concerns of an ethnic majority must necessarily be at the cost of the aspirations of ethnic minorities.

That could explain why the Opposition, as it stands at present, does not regurgitate the critiques of this regime that civil society is making: that it’s majoritarian, spouting ethnic supremacy, and using the ethnic trump card. The Opposition is playing a slow game, but it’s slow precisely because it’s meant to be. It is targeting 2025, not 2021. To target 2025, it must play the government’s game while also playing an oppositional game. The challenge is twofold. It always has been.