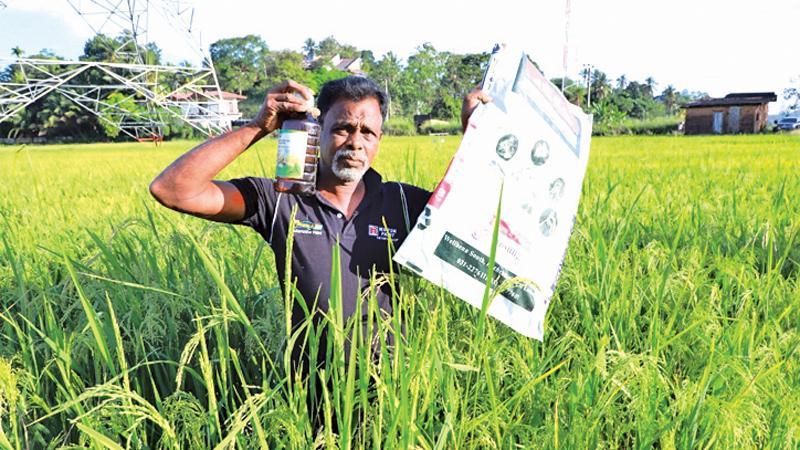 Nimal Sisira Kumara is a paddy farmer who moved from his ancestral village in Polonnaruwa to Meerigama. When the farmers at Polonnaruwa took to the streets in protest of Government’s organic farming policy, he quietly decided to face the challenge in a more positive note. His paddy field today stands out as a model for organic farming.

Nimal’s story is just one among many other promising stories in Meerigama. The farmers there, instead of locking horns with the Government officials and making excuses and unending complaints, decided to face the challenge head on to use the organic fertiliser provided by the State officials to cultivate their paddy lands.

Despite initial hiccups, due to delays in commencing cultivations and supply of organic fertiliser, he has proven that organic farming can, indeed, be a reality in the case of paddy farming.

He says, in paddy farming, more than the type of fertiliser used, what is important is the farmer’s undivided attention to his cultivation, until the harvest is finally collected.

He said that the delay in beginning cultivation in the Maha season could adversely affect the yield and the growth of paddy plants but disputed that the ongoing organic farming drive will result in a food shortage and a famine.

Agriculture Research and Production Assistant at Imbulgoda, Chaminda Ruwan Perera said the farmers in his beat did not face issues with the organic fertiliser supplied by the State. This is despite these lands having a sandy soil, which is not very conducive for paddy farming.

“We have disproved claims the Government’s initiative is a failure. We invite fellow farmers to visit our paddy fields to see for themselves. Don’t get swayed by falsehood spread by interested parties,” Perera said.

Paddy farmer Dammika of Imbulgoda said if they received instructions and the know-how on organic farming earlier, they could have had a better harvest.

A paddy farmer at Bokalegama Upper division in the Meerigama agrarian zone Dhanapala said that he is thrilled to see, probably, the highest yield received in his lifetime at this Maha season, after he switched to organic fertiliser.

“I was using a mixture of organic and chemical fertiliser in the past two cultivation seasons. For this Maha season I used only the organic fertiliser,” he added. Ariculture Research and Production Assistant Renuka Abeysinghe echoed these sentiments. She said paddy farmers in her agrarian zone have also recorded similar results which are really promising.

“Some of these farmers had been self experimenting with organic farming for the past couple of years, and the Government initiative is a godsend for them.”

Farmer Nandana Premasiri from Pallegama, Bokalawela said,” I am the Chief Kapurala at Pallegama Devale. We have received a higher yield this time and I believe it is because of the organic fertiliser we used.”