The difference between ‘slash and burn’ and scorched earth politics 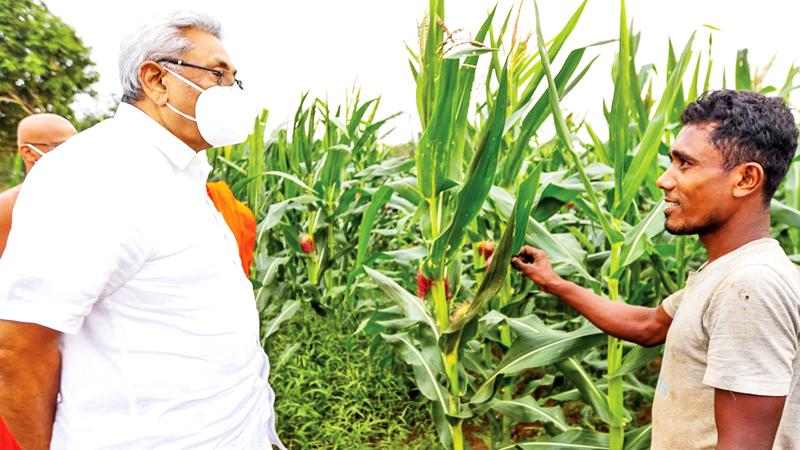 The real environmental conundrum in this country seems to be that nobody knows where slash and burn cultivation left off, and slash and burn politics began. The President’s recent speech at Uhana was seemingly on aspects of slash and burn agriculture.

A certain amount of forest cover in the country from the OSF or Other State Forests areas have been going under the axe of slash and burn Chena cultivators, from time immemorial.

Environmentalists want these slash and burn cultivation methods eradicated completely, but the Government seems to be anxious not to deprive villagers of their recourse to traditional lifestyles altogether.

When the President asked in Uhana ‘how are they going to cultivate when they don’t have land?’ he probably had in mind the age old practice of slash and burn that has essentially been built on the premise of regenerative forestry, and eco-sustainability.

Some slash and burn ideologies have no compunctions at all. This week it was reported that two Sri Lankans have been indicted in the US for having helped mount the Easter Sunday attacks, and assisted ISIS in that effort.

Some would say that these persons were not radicalised here in Sri Lanka but why not — this country has, despite its bucolic charm, probably seen the worst violence in the entirety of Asia in the past five decades.

There is a difference between slash and burn and scorched earth. Scorched earth is to destroy everything — assets, infrastructure and practically an entire terrain in total — so that even if the enemy overruns a territory it will be useless for all practical purposes, and therefore the enemy will presumably not overrun it.

They were scorched earth offensives of the most cynical, nihilistic variety — the scorched earth of the pyromaniac, and the psychopath. Also, yes, we have to add Zaharan to the list to create a triumvirate of latter day ogres that can be fittingly demonised in post independence Sri Lanka, because they were post-independence Sri Lankan ‘baby boomer’ generation kids if you will, who can be demonised because they were the demons.

This writer can remember saying this at a seminar in Thailand. “There is nothing to demonise in Prabhakaran, because he was the demon”. Ditto, Wijeweera and ditto, Zaharan.

So, emerging from this maelstrom of carnage, there is no major surprise if there were two Sri Lankans identified in the US last week, that swore fealty to ISIS — perhaps the most demonic organisation the world has seen in recent times — and wanted to carry out their bidding. You wouldn’t need any imported psychopaths to make some of our chaps lose their marbles, now would you?

So, if the country despite all its allure and its resplendent charms — no exaggeration that — managed to create a troika or a pantheon if you will, of demons, and we also have a set of slash and burn politicians who sometimes want to burn down everything that a government does, well no surprises there either.

Anyhow, this article began with the idea of dissecting recent environmental policy, but veered into the territory of scrutinising the minutiae of the kinds of terrorism that we as a country have spawned. No matter.

Is it correct or not that slash and burn cultivation — known to the rustic loin cloth wearer as the chena method — is another form of scorched earth, i.e. literal scorched earth? It is, if you want to believe the environmentalists.

But as the President says, we have had a tradition of slash and burn cultivation, that doesn’t amount to scorched earth. The people cannot do agriculture, he says, if they don’t have the land on which to do it.

In which case, is the political campaign against the vesting of Other State Forests (OSFs) with the Commissioner of Lands after removing these areas from under the purview of the Forest Department, a cynical slash and burn partisan campaign? Or is it, to make matters worse, scorched earth politics?

Environmentalists such as lawyer Ravindranath Dabare are of the view that chena cultivators are fine, and that nobody has ever objected to them in the first place.

But, the problem say these folk, is when the slash and burn axe wielders take the licence given to chena cultivators and do much more than slash and burn by using these lands on an industrial scale.

However, never mind environmentalists, political agitators do not have to jump the gun because apparently there is an amalgamation of three committees going into the issues of land utilisation in these areas designated as OSF or Other State Forests.

The moment environmentalists are in cahoots with politicians and in scorched earth territory, it is easy to tell. The movement against the Pelwatte Sugar factory in the eighties had a scorched earth quality of no compromise hard-headedness about it.

The campaign — carried out in less than peaceful times when the JVP was fomenting violence in the Moneragala district and the Deep South — saw its share of upheaval, that bordered on murder and mayhem. But it has to be said that decades later, Pelwatte Sugar is a viable entity, and there is not so much as a smidgen of antipathy towards their factory and plantation these days from the villagers in the area.

There were equally vehement protests that were mounted against the establishment of the Kandalama Hotel but there isn’t a whimper today, and villagers seem to be happy the tourist resort is a source of employment for young men and women who’d rather work, by the way, than protest at the drop of a hat and be cannon fodder for crafty political operators.

The posh and the wannabe posh including some environmentalists care about the elephants, but they don’t care about the victim villagers at the receiving end of elephant attacks.

The posh and the wannabe posh also spend sleepless nights over forest destruction, but don’t care about the chena cultivators who are losing their livelihoods as environmental laws get more regimented and come under a great deal of environmentalist oversight.

Not caring for the salt of the earth — the people of the area— is a form of scorched earth policy as well, and if it cultivates anything, it cultivates resentment.

The environmentalists swear their campaigning is not about the chena cultivators, and it’s agreed that ceding out parts of forests under the direction of Government Agents can lead to corruption and the depletion of forest cover — whether from the reservations or the OSFs— at the hands of unscrupulous elements who would also pursue a scorched earth policy for their own nefarious purposes. But is scorched earth politics the answer?

Shouldn’t the authorities be helped to balance out environmental concerns with the livelihood issues of hapless villagers? Should it all be a zero-sum game — all elephants and no people, a soulful love for the habitat but a kick up the backside of the chena folk who battle pachyderms among other animals — and the elements — to eke out an existence?

Can there be less scorched earth, masquerading as vigilante resistance, and whatnot? Rational environmentalism is not of the scorched earth variety — it should be of the slash burn and regenerative variety, which seeks human cohabitation with the habitat.

Can we scorch the humans to a frazzle, and say we are trying to stop the scorching of forests?