The desperate NGO wish for Lanka to be Myanmar 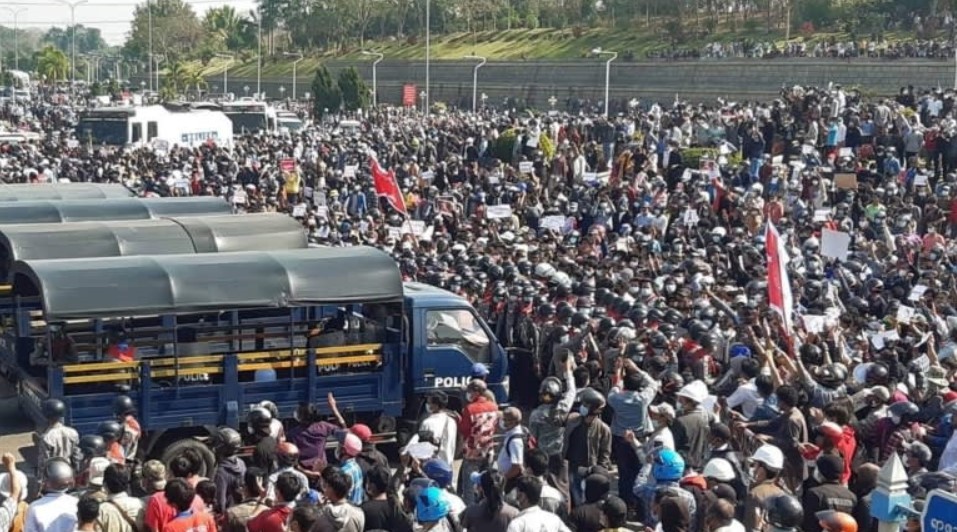 What happened in Myanmar? The military ‘coup’ in Myanmar is not a coup in the truest sense of the word for the simple reason that the military was already in charge more or less. Maybe you could say less earlier than what it is now, which explains the use of more or less in the preceding part of this sentence.

However, the alleged military coup seems to have sent ants scurrying up the elbows of certain people permanently on edge in this country. It is interesting, but also hilarious. One local NGO type wrote this a few days after the recent tumultuous events in Myanmar happened: “As for space for civil society activity, it is being surely and steadily shrunk by the inquiries of the Security Forces, the work and presence of Task Forces. Myanmar has happened. Are we next? Does it need to?”

Another commentator offered this: “Politicization of the military serves neither the military nor democracy. The process is as dangerous as it is volatile. …Even in Sri Lanka, the love and respect the military now enjoys in the South of the country were not there when the military was battling the Leftist insurrections in 1971 and 1988–90.”

The gist is clear. There is too much military intrusion here in what should be civilian processes of governance, and hence, a military coup cannot be ruled out — since it has happened over there in Myanmar. We can understand that writers on a slow news day are searching for topics to write about, but even by that metric the above is such a stretch that it must be straining these people at the sinews.

Trying to predict something for Sri Lanka on the lines of the coup in Myanmar is ridiculous for many reasons. The first is that as stated at the outset, the ‘coup’ in Myanmar is a coup-not-quite, as the men in khaki were quite dominant and never did go away despite the hybrid military–civilian system they were willing to accommodate in part because of the steely and unrelenting resistance of the undisputed political icon of the nation, Aung San Suu Kyi. They held a quota of the Parliamentary seats and Cabinet posts reserved for themselves.

Moreover, this was a military that was ruling Myanmar for the better part of the last 50 years. Myanmar is no Sri Lanka in this regard, and anybody who pretends not to know that is being disingenuous. The military reluctantly ceded some power to the civilian political leadership in Myanmar and decided to take it back last week. There is no condoning it of course. No sane commentator on world affairs would be happy about the events in that country.

But that is different from recognizing it for what it is. The military that was always dominant has reasserted its dominance. It is not even remotely close to the Sri Lankan situation in which the military never once had a hand in governance. That first quote by the NGO writer in Colombo that goes ‘Myanmar has happened, are we next?’ breaks the ridiculousness Richter by a bushel-load.

No, we are not next, and everybody knows that. We never were or are remotely close to Myanmar in respect of military dominance. Now, it is well known that the NGO brigade will try to sell the family farm if they can show something that patently is not there — a military takeover of Sri Lankan governance.

There is no harassment of the military today, and that is seen by the NGO types as military dominance. They see the military not being harassed on a daily basis these days, and are not used to seeing that after five years of seeing the military cowed and ridden roughshod over. So the NGO brigade thinks the military must be ruling.

In their rush to try and father a canard that there is militarization in this country, they have forgotten that people here are having more organic ties if you will with the military in this country, after the Army in particular became synonymous with efficiency. But the Tri Forces merge into the scenery here, literally. The mass of them are in camouflage even when they are fighting Covid.

The detractors should also be able to recognize the fact that Sri Lankans are not enamored with one leader. In Myanmar they have to rely on Aung San Suu Kyi. Civilian politics is almost entirely identified with her.

When the local alarmists compare Sri Lanka with Myanmar they seem to secretly wish that Sri Lanka would be like that. But here, leaders change. Presidents come and they go. Power is not personified in the figure of one individual, not even Mahinda Rajapaksa who is now a former President, a fact made all the more real considering that it is President Gotabaya Rajapaksa who is now being accused by these NGO folks of ‘having installed the military’.

We have such deep-rooted traditions of democracy here that the Army wouldn’t know even if power hit them in the face. It is because the military is always looking out for civilian leadership. That is what’s happening today in the country, for instance.

The Army was on the lookout for a civilian politician to come around and save them, even in the face of the worst ignominy. When the military was being persecuted in the five years of UNP rule, its high command was expecting a new political leadership to come and play the saviour role.

When the Easter Sunday carnage happened, it is the Cardinal Malcolm Ranjith, a faith leader, not a military man, who came around and filled the leadership vacuum. Imagine if that had happened in Myanmar!

The problem the Sri Lankan NGOs are having now is that they are desperate the Army is not anywhere close to fitting their artificial narrative of military dominance. So they are goading the Army to please come and take over, as in Myanmar so that their story can for once ring true. For example, the NGO writer referred to above writes something to the effect that we may soon have the Army running the economy.

Well, it is their wish. They can then say — ‘See, see, we are are looking like Myanmar’. As things are, we are looking nothing like Myanmar and they are sad about it. Their narrative of ‘militarization’ lies in smithereens. The fact remains that we were never a country that had a social fabric woven around the military. Over the years, the military was the last thing on people’s minds. This is the country of the ‘Weva’ and the ‘Dagoba’ — the tank and the temple. The military even in recently popular parlance, were the ‘boys’. They are the shy and retiring fellows hanging around downtown trying to melt into the scenery in their camouflage, looking self-conscious by the fire hydrant or the lamp post. Militarization my foot.

But contrast that with the assertiveness of civilian leadership here. In Myanmar, when the military took over, Aung Sang Suu Kyi, from her place of detention, had to ask her followers to protest. Back in Colombo, civilians are always in protest mode, and they are the ones who have to ask the Army to pack some punch, get a hold of themselves, and protest against unfair accusations against them on the human rights front, etc.

Aung San Suu Kyi would have given anything to have an Army like ours. It is an army that has to be goaded into doing things — “Please take over this or that, because we civilians, erm, we are busy protesting all the time and raising Hell over there, and raising Cain over here.” As a matter of fact, Aung San Suu Kyi would also have given anything to have a horde of civilian followers such as ours. The Army in Myanmar would not have tried anything with our type of civilian chutzpah — and that is the way it ought to be — and always is — here in Colombo.