The British will not learn English, let’s not kid ourselves 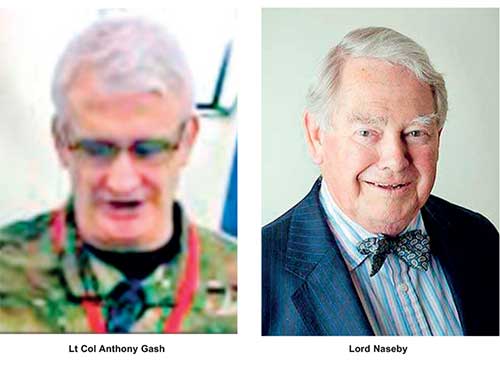 The UK and others hell-bent on censuring Sri Lanka for imagined war crimes frequently refer to documents that are based on a report issued by a ‘panel of experts’ appointed by Ban Ki-moon. The Darusman Report is what it is called. There are lots of claims in that document but no one can claim that any of it was ‘independently confirmed.’ The sources will remain a mystery for years to come. In the United Kingdom, they’ve not heard of the word ‘contradiction’ it seems. Certain things that are partisan and come unconfirmed are permissible whereas other stuff that’s independent (unless the UK actually sided with the Sri Lankan security forces in the last days of the war on terrorism) are out of order.

The United Kingdom, it is reported, has rejected Sri Lanka’s request for the disclosure of wartime dispatches from its High Commission in Colombo. Sri Lanka had made the request during the 46th Session of the United Nations Human Rights Council (UNHRC) in Geneva a few weeks ago.

The dispatches from the then British Defence Advisor, Lt Col Anthony Gash were never referred to in any of the many ‘studies’ on Sri Lanka’s bloody struggle against terrorism. Indeed no one would have known of them or what they contained if not for Lord Naseby invoking the UK’s right to information laws to obtain them.

Gash’s dispatches clearly prove that there were no war crimes committed by Sri Lankan security forces, certainly not the kind that the terrorist lobby (strangely or perhaps not so strangely bed-fellowing with rogue states such as the UK and USA) and indeed these bed-fellows claim have been perpetrated.

British authorities pretended for years that there was no such information available. Now they can’t deny these dispatches exist. And therefore they’ve come up with an interesting disclaimer. The UK now faults Gash for not obtaining independent confirmation of reports he had sent to the Foreign and Commonwealth Office (FCO). Key word: ‘now.’ This was NOT the position originally taken by the FCO.

Alright, let’s take the CURRENT position at face value. Couldn’t the UK table the dispatches in all relevant forums with such caveats/disclaimers? That’s just one issue. There’s another. Yes, the business of ‘independent confirmation.’ What’s independent and what’s confirmation?

The UK and others hell-bent on censuring Sri Lanka for imagined war crimes frequently refer to documents that are based on a report issued by a ‘panel of experts’ appointed by Ban Ki-moon. The Darusman Report is what it is called. There are lots of claims in that document but no one can claim that any of it was ‘independently confirmed.’ The sources will remain a mystery for years to come.

In the United Kingdom, they’ve not heard of the word ‘contradiction’ it seems. Certain things that are partisan and come unconfirmed are permissible whereas other stuff that’s independent (unless the UK actually sided with the Sri Lankan security forces in the last days of the war on terrorism) are out of order.

It seems to me that the authorities in the UK don’t know whether they are coming or going. Well, maybe they do know that they are severely challenged in logic, in intellect, in moral standing etc., but believe that the world someone does not notice. A third possibility: they just don’t care.

The United Kingdom, with respect to the UNHRC resolution and all matters relevant to it, then, hasn’t exactly covered herself in glory, but what of that considering that shamelessness is the blood-stained batch on its coat of arms, so to speak?

Let’s humor them, though. There’s a lady called Sarah Hulton. Let’s assume she knows English. Let’s assume she has some skills in language comprehension. Let’s not assume she values truth, justice and being honorable for we shouldn’t kid ourselves too much. Nevertheless, we can ask some questions.What’s the value of hearsay? Do we discard ‘word’ and if so which words? If we pick some words and junk others, what criteria should we employ? The Darusman Report, for example, is ALL ABOUT HEARSAY. We have to assume that until we know who said what, for only then can we talk of reliability of source.

We have reports that toss out random numbers without a shred of substantiation. Is that OK, Ms Hulton? If Gash is unreliable, how can any report based on some other report that is based on hearsay be okay?

Let’s not kid ourselves. This is not about truth and reconciliation. The United Kingdom values lie over truth, injustice over justice, violation of all basic tenets of humanity over their protection, theft over property rights, plunder over protection. The British are yet to reconcile themselves regarding the many crimes against humanity they have perpetrated or, at least, benefited from. Seeking justice and truth from such people is silly. Seeking honor from the dishonorable is silly.

And yet, in Geneva and in other places where bucks and bombs count more than truth and justice, countries like the United Kingdom will prevail. For now. For now, we must add, for we know that nothing is permanent. For now, the reports of idiots and/or the politically compromised will be valued over those of impartial, dispassionate individuals such as Gash.

Let’s get this right. The British are not just bullies. They are cowards. Intellect is not their strong point or even if they are sophomoric at best, they are bullish enough to push aside the truth. It’s about ‘by any means necessary’ but obviously not in an emancipatory sense of that phrase, as used by Malcolm X. So when they talk of truth and justice, reconciliation and peace and other such lovely things, let’s keep in mind that it’s all balderdash. When they talk of ‘victims’ it is nonsense because without ‘wrongdoing’ that’s established, there can be no ‘victims’. Mr Hulton is not sleeping ladies and gentlemen. The United Kingdom is not sleeping. The Foreign and Commenwealth Office in that country is not sleeping. They are pretend-sleepers. They cannot be woken up.

One is reminded of a song from ‘My fair lady,’ the musical based on George Bernard Shaw’s ‘Pygmalion’. Why can’t the English teach their children how to speak? That’s the title of the song. When the English learn English — now that would be the day! Right now they speak some garbled language devoid of any logic or reason. It works for them.

Colonial-speak is a possible name for that language. It is an excellent communications device in all things antithetical to the high ideals, the furtherance of which was the reason for the establishment of the UNHRC. Indeed that has become the lingua franca of Geneva. The British know this French, pardon the irony! Ms Hulton knows it, as do her bosses in London as did their ancestors whose crimes against humanity are left out from the history books.

We are not talking of the past though. It’s the present. It’s ugly. As ugly as the past, only it’s come wearing other clothes. Nice ones. Not everyone is fooled though.