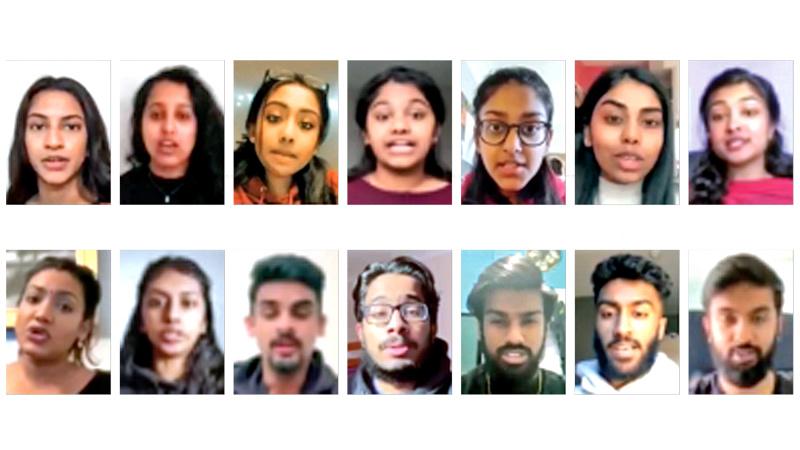 The LTTE Diaspora are very much in action of late. This is nothing to be surprised of. At every Geneva session their adrenalin gets pumped and LTTE kitty is put to use. Several videos are being relayed of girls and boys speaking with heavy foreign accents off a prepared script about Tamil Eelam. How do they propose to create that Eelam? By packing off another set of Tamil poor and low caste children into the Vanni jungles?

Do these foreign living LTTE diaspora children know how many such Tamil children lost their youth and were denied fundamental right to education? Are these foreign living children so wicked that they want to outsource Eelam and send another set of children to the jungles while they enjoy life living in the West and realising their personal dreams? Why outsource Eelam to innocent Tamils, why don’t these children go to the Vanni themselves and fight for Eelam?

Listening to these children overseas you have to wonder what they know of the life that the Tamil child soldier went through.

Do these foreign-living Tamils reading scripts with heavy accents know that the Tamil Eelam they are demanding while living in Toronto, Texas, and such meant a sordid life for their counterparts back in Sri Lanka?

While these children were happily living in foreign climes, going to play school, playgrounds and eating toffees, the Tamil child soldiers were kidnapped from their homes, the begging of their parents only meant gunshots scaring them back home, any child that fled the LTTE ‘orphanages’ were shot and killed, the only playground these children knew were training ground that taught them how to shoot.

The only sweets they bit were the cyanide capsule that spelled their death certificate if caught. So how do these foreign-living Tamils feel about the suffering of these Tamil child soldiers in the jungles of Vanni, with stinking clothes, hardly time to have a bath, wearing the same underwear for months, smelling of body odour never smelt a perfume or used a bar of soap in their little lives and never had the fortune to even enjoy a parent’s hug and kiss.

The only toy they held was the gun, the only playmates they had were the other child soldiers equally frightened and brainwashed into hating people they had never seen or known.

had the luxury of going to school, of taking part in prize-givings, winning competitions, showing off their talents, singing, dancing and many other things.

What did these Tamil children enjoy? The only prize-giving they attended was the LTTE passing out parade where they shook hands with the mass murderer Prabakaran and was given a cyanide capsule and gun to kill.

They had no opportunity to

sing or dance or show off their talents. The only talent they could show off was their ability to kill and shoot people. Some of these children are today invalid without legs or hands. What a life that would have been for such a child. Have the 9 girls featured in the video probably with foreign passports, probably not knowing a single town in North Sri Lanka or even where any of the LTTE camps were set up, thought of what life would have been like for teenage LTTE child soldiers in the jungles?

Who stole their adolescence? Did they ever get to cut a cake for their birthday, did they have a teen party, did they ever go out for parties or watch a movie with friends or share girlish secrets? Just imagine the torment these young girls in tiger uniforms would have suffered? How many of them became sexual bait for male combatants living in bunkers for months where naturally the sexual desires would have taken the better of their orders! Why are these facts kept hidden? Even Thamilini’s book subtly brings out some of these facts which are nicely swept under the carpet.

Are these foreign-living teens not ashamed to come in public demanding Tamil Eelam which they simply want to outsource to another set of poor and low caste Tamils while they enjoy educating themselves and gaining lucrative employment overseas and enjoying the LTTE kitty which is ever expanding.

These 594 LTTE child soldiers were given a Presidential pardon and put through schools something the LTTE Diaspora would not even dream of doing. The Government gave them vocational training and guided them on taking a new path to the one they had been forced into by the LTTE and the LTTE Diaspora. Gokulan became a singing sensation the whole country is fond of.

It is pathetic to watch LTTE Diaspora children reading off scripts demanding Tamil Eelam living overseas and unlikely to ever come to a bogus Tamil Eelam. So what is this actual game the LTTE Diaspora are playing?

Do they need to keep alive Tamil Eelam to enable more Tamil asylum seekers and refugees to foreign country on the bogus ‘discrimination’ card?

Do they need to keep alive the Tamil Eelam demand to continue the nexus of international rackets they operate which has been able to even buy off corrupt foreigners.

Do they need to keep alive Tamil Eelam as this is what the Western governments have asked of them as it enables them to use the UN system to pressure and carry out gun-boat diplomacy against Sri Lanka, or is it a combination of all above?

We would really like to know the real reason as these foreign demands are nothing that connects with what the Tamils in Sri Lanka want. With the ever reducing number of pro-LTTE protestors in Sri Lanka and decline in TNA following, the LTTE Eelam quest is as good as dead now.

All that Tamils living in Sri Lanka wish to do is to have their areas develop, to enable their children to go to school, university, get a good job, own a house and car, marry and start a family. The Tamils in Sri Lanka have far bigger issues than Eelam to think of – these include the drug menace, drinking fathers, abusive fathers, rape by members of their own family, why don’t the LTTE diaspora children do some initiatives to curb these headaches that the Tamils are suffering.

If the LTTE diaspora children really want to create a Tamil Eelam – put Rudrakumaran into a tiger suit, wear tiger kits themselves and go to the Vanni jungles and experience first-hand what the Tamil child soldiers suffered for three decades losing their entire youth. Then come on Instagram and tell us whether it was really worthwhile.