Take Human Rights seriously, not so much the council or office 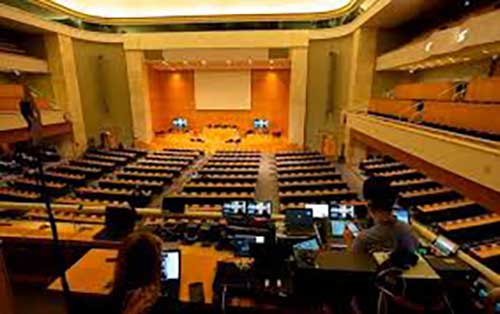 The 46th Session of the UN Human Rights Council started on 22 February morning with obvious hiccups. The Office, to mean the Office of the UN High Commissioner for Human Rights, finally decided to hold all sessions virtually online, only the President of the Council and the assistants in the high table sitting at the UN Assembly Hall in Geneva. The President, Ms. Nazhat Shammen Khan, Ambassador from Fiji in Geneva, wearing a saree, was graceful in the chair with empty seats surrounding.

UN General Secretary, Antonio Guterres’ address could have been quite exemplary if he gave a proper balance to the developed and developing countries. He talked about racism and fight against racism but did not mention where racism is overwhelmingly rampant (US and Europe) and what to do about it. Outlining the human rights implications of Covid-19 pandemic, he made quite a good analysis. It was nice for him to say, ‘human rights are our blood line (equality), our lifeline (for peace) and our frontline (to fight against violations).’ However, in the fight against violations, he apparently forgot about the ‘blood line’ or the ‘lifeline’ quite necessary not to aggravate situations through partiality and bias. He never talked about the importance of human rights education or promoting human rights awareness in all countries.

His final assault was on Myanmar. Although he did not call ‘genocide,’ he denounced the treatment of Rohingyas as ethnic cleansing without mentioning any terrorist group/s within. His call for the release of Aung San Suu Kyi and other civilian leaders undoubtedly should be a common call of all. However, he did not leave any opening for a dialogue with the military leaders or bring back a dialogue between Aung San and Min Aung, the military leader. With a proper mediation, it is not impossible. Calling for a complete overhaul as the young demonstrators idealistically claim might not be realistic.

High Commissioner Michelle Bachelet’s address was brief and uncontroversial this time without mentioning any country or region. It is clear by now perhaps she is not the real author of the Report against Sri Lanka, but someone probably hired by the so-called core-group led by Britain. Her major points were related to the coronavirus pandemic trying to highlight some of the socio-economic disparities and imbalances of policy making that have emerged as a result. The neglect of women, minorities, and the marginalized sections of society were emphasized. But the poor was not mentioned. As a former medical doctor, she also opted to highlight some of the medical issues underpinning the crisis.

Then came the statements from different countries in the first meeting in the following order: Uzbekistan, Colombia, Lithuania, Afghanistan, Poland, Venezuela, Finland, Fiji, Moldova, Georgia, Kazakhstan, Equatorial Guinea, Vietnam, Belgium, and Morocco. The obvious purposes of these statements were different. Some countries were apparently canvassing for getting into the Human Rights Council at the next turn perhaps for the purpose of prestige. Some others were playing regional politics against their perceived enemies. This was very clear when Lithuania and Poland started attacking Russia.

But there were very sincere human rights presentations as well. One was the statement by the President of Afghanistan, Mohammad Ashraf Ghani. He outlined the devastating effects that Afghanistan had to undergo during the last 40 years, because of foreign interferences. The initial support to Taliban by big powers was hinted. His kind appeal was to the UN was to go ‘beyond discourse to practice’ giving equal chance to the poor and the developing countries to involve without discrimination.

China’s Foreign Affairs Minister, Wang Yi, made his presentation almost at the end of the first day. This is apparently the first time that China had directly addressed the Human Rights Council. Beginning with outlining the devastating repercussions of the coronavirus pandemic he stressed that the world should face the challenges through ‘solidarity and cooperation.’ He broadened the concept to human rights solidarity and cooperation. His expressed views were quite different to the others, particularly to the Western ones.

He frankly said that what he expresses are the views of China on human rights without claiming those are absolute truths or forcing others to believe or implement them. There were four main concepts that he put forward before the member countries. First, he said, “We should embrace a human rights philosophy that centres on the people. The people’s interests are where the human rights cause starts and ends.” Second, he said, “we should uphold both universality and particularity of human rights. Peace, development, equity, justice, democracy, and freedom are common values shared by all humanity and recognized by all countries.” “On the other hand,” he said, “countries must promote and protect human rights in light of their national realities and the needs of their people.”

“Third,” he said, “we should systemically advance all aspects of human rights. Human rights are an all-encompassing concept. They include civil and political rights as well as economic, social, and cultural rights.” He then emphasized, “Among them, the rights to subsistence and development are the basic human rights of paramount importance.” Fourth, “we should continue to promote international dialogue and cooperation on human rights. Global human rights governance should be advanced through consultation among all countries.”

It was on the same first day before China, that the United Kingdom launched its barrage against several countries not sparing Sri Lanka. The Foreign Secretary, Dominic Raab, delivered the statement from top to bottom attacking alleged violating countries on human rights. But there was no mentioning of Israel for the repression of Palestinians or the systemic racism rampaging in the United States, including the 6 January attacks on the Capitol by extremist/terrorist groups.

His first sermon was on Myanmar without acknowledging the British atrocities or mismanagement of this poor and diverse country during the colonial period. He was quite jubilant over implementing sanctions and other restrictions over the country. Many sanctions, in my opinion, are extortions. Undoubtedly, Aung San Suu Kyi and other leaders should be released, and democracy restored. This is a task of the whole council and when one or two countries try to grab the credit, there can be obvious reservations of others.

His further scathing attacks were against Belarus, Russia, and China. Some appeared factually correct but not necessarily the approach or the motives genuine. The following is the way he came around Sri Lanka. He said,

“Finally, we will continue to lead action in this Council: on Syria, as we do at each session; on South Sudan; and on Sri Lanka, where we will present a new resolution to maintain the focus on reconciliation and on accountability.”

‘Action’ to him basically means repeatedly passing resolutions, of course imposing economic and other sanctions. He said, “as we do at each session”; like bullying poor or weak countries at each session. Can there be a resolution against Russia or China? I doubt it.

What would be the purpose of presenting a resolution against Sri Lanka? As he said, “to maintain the focus on reconciliation and on accountability.” This will satisfy neither the Tamil militants nor the Sinhalese masses. But it might satisfy the crafty Opposition (proxy of the defeated last government). This is not going to be based on any of the actual measures that Sri Lanka has taken or not taken on reconciliation or accountability. But based on the ‘Authoritarian and Hypocritical Report’ that some anti-Sri Lankans have drafted within the Office of the High Commissioner for Human Rights. This what I have discussed in my last article.

In this context, successful or not, the statement made by the Sri Lanka’s Minister of External Affairs, Dinesh Gunawardena, in rejecting any resolution based on the foxy Report of the Office of the UN High Commissioner for Human Rights, in my concerned opinion, is absolutely correct.

By Major General Nirmal Dharmaratne A glance at the last four decades of the military history of Sri...
Read more
Commentary

BY RAJPAL ABEYNAYAKE Roads, and roads to justice are two different things. But, we’ll get to that. The opening...
Read more
Commentary

BY RAJPAL ABEYNAYAKE If there is an economy worth talking about, there is no need to crow about it...
Read more

By Major General Nirmal Dharmaratne A glance at the last four decades of the military history of Sri...
Read more
Commentary

BY RAJPAL ABEYNAYAKE Roads, and roads to justice are two different things. But, we’ll get to that. The opening...
Read more
Commentary

BY RAJPAL ABEYNAYAKE If there is an economy worth talking about, there is no need to crow about it...
Read more
Sri Lanka BriefNews, views and analysis of Human Rights & Democratic Governance in Sri Lanka