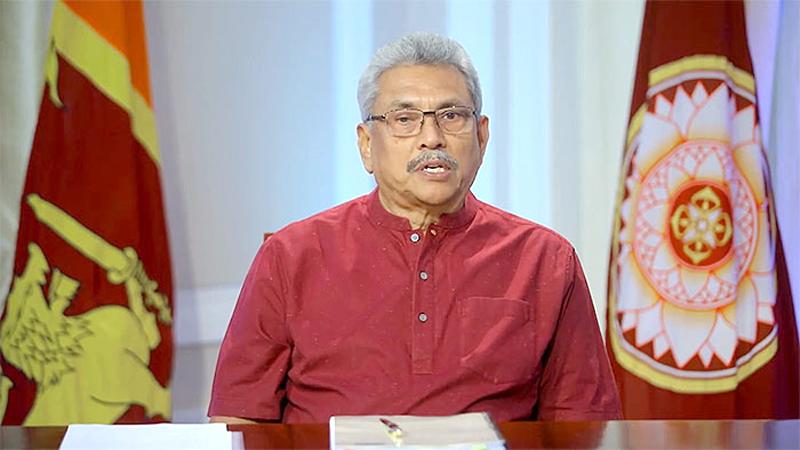 President Gotabaya Rajapaksa called on the masses to be prepared for a prolonged lockdown, if needed, but assured that if the State inoculation drive was continued uninterrupted, he was certain, the number of deaths and cases of Covid-19 will drop as the experts have pointed out.

In an address to the nation on Friday night, minutes before a country-wide lockdown was imposed to contain the surging Covid cases and deaths, the President said the Government was committed to containing the spread of the pandemic within the country and vaccination is its primary solution, as recommended by the WHO.

Cautioning that the economy would be in a great crisis if the country was put under another complete lockdown, he said, “It is not a situation that this country can bear.”

“We successfully managed the first wave of the Covid-19 pandemic due to the steps that we took at that time. Such stern decisions (months-long lockdown) had to be made then because there were no other options available.” However, he said, “The lowest economic growth of the country since Independence was recorded during the first wave of Covid-19 as a result of the prolonged lockdown.” “The apparel sector that brought in a revenue of about USD 5 billion to Sri Lanka was gravely affected. Their orders were cancelled. Many lost their jobs. Export earnings fell.”

“Our tourism industry, which generated over USD 4.5 billion and provided a livelihood to over three million people, completely collapsed. Hundreds of thousands of jobs were lost,” President Rajapaksa said.

Recalling that the construction industry and the small and medium scale enterprises were among the hard hit, he said, “Close to 4.5 million self-employed personnel and daily wage earners became helpless since they lost their sources of income completely.” The President said that despite losing its income drastically, the Government had to feed thousands to keep them alive during the lockdown.“Though our foreign exchange earnings dropped, we did not default on the Government’s loan installments. We had to pay a colossal loan installment of about USD 4 billion a year as a result of the loans obtained by various governments in the past. All these loan installments were settled on time.” While reiterating that a lockdown was not the solution to contain the pandemic but expeditious implementation of the vaccination drive, the President said as a result of his personal appeals to the Heads of State and efforts of all stakeholders, Sri Lanka was receiving stocks of vaccines to continue its inoculation drive uninterrupted to meet targets.

He said the Government has taken all measures to face the ‘new normal’ and thanked the health sector workers tirelessly struggling to help those affected.

While urging the trade unions that this is not a time for strikes and protests, he added, “Do not attempt to destabilise the country. “