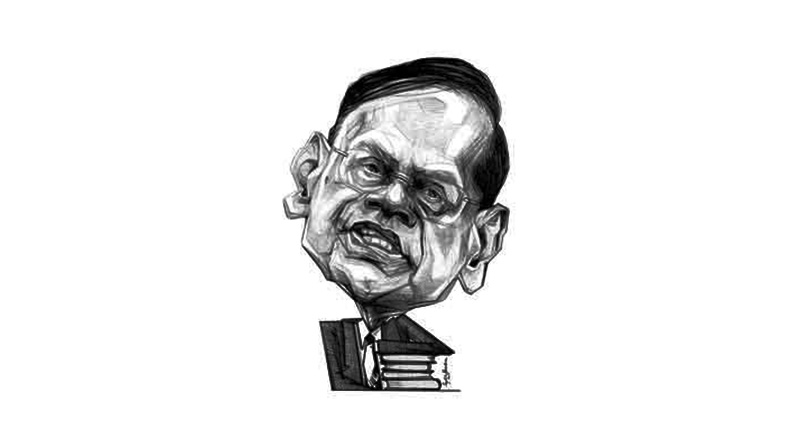 Education Minister Prof. G.L. Peiris, in an interview with Daily Mirror, comments on the 20th Amendment to the Constitution and responds to questions about it. Excerpts:

Q: The 20th Amendment has been the subject of criticism these days. What is the rationale behind the government’s move?

The 20th Amendment has been brought forward to address very practical questions. The opponents of the 20th Amendment are trying to raise various controversies. The rationale is very simple. The 19th Amendment which is sought to be rolled back by the 20th Amendment was an exercise in vengeance. It has no other purpose than wreak vengeance on a particular family to sweep them away from the political field, and if possible, to put them in jail. The price for that folly was paid not by the Rajapaksa family but by the people. The 19th Amendment made governance impossible. As long as you have executive presidency as an institution, the President is empowered to do the job for which he was elected. The rationale of presidency is that a country that needs to have rapid development needs to have a strong executive. The President is elected for five years. He receives a mandate directly from people. He is elected on a particular programme of work- a specific agenda. People of the country endorse that agenda and give him the power to implement it. He has to deliver in keeping with the mandate.

The 19th Amendment prevented the President from giving effect the mandate he received from the people. The responsibility is there. What he lacks is the authority to deliver. That is very clearly demonstrated. That is why nothing happened during the Yahapalana years. President Gotabaya Rajapaksa was elected with 6.9 million votes. There is no doubt about his mandate. But, how can  he deliver? He cannot hold the defence portfolio. But, he is responsible for maintaining the law and order of the country. How can he deliver if he cannot even dismiss the Inspector General of Police?

The President has no say in the appointment or removal of the IGP. The IGP faced serious allegations. He was brought to court in shackles. The magistrate decided that he should be consigned to remand jail. After all that, the President cannot remove him. He is still the IGP. All that the government can do is to appoint an acting IGP. Then, who is responsible for the defence of the country?

Take the Easter Sunday carnage! Evidence transpiring before the Presidential commission is really horrifying. It is crystal clear that all the facts were known to the government. Indian intelligence has brought this to the notice of the Sri Lankan government not once but many times. All the facts were known, but the government could not do anything at all to prevent this disaster which resulted in the loss of 265 lives. That is because of the creation of two centres of power. In a coalition consisting of different parties, there is a divergence of policies, approaches and a ferocious conflict of personalities. It was the people of the country who paid the price. The result was the state of anarchy. That situation could not have existed before because there was clear attribution of responsibility. That became cloudy.

The 19th Amendment which is sought to be rolled back by the 20th Amendment was an exercise in vengeance. It has no other purpose than wreak vengeance on a particular family to sweep them away from the political field

Q: What is the reason for the proposal to replace the constitutional council with the parliamentary council?

The 20th Amendment substitutes the parliamentary council for the constitutional council. The constitutional council consisted of ten persons. Three out of them had to be nominated from civil society by the Prime Minister and the Opposition Leader. In the unusual circumstances which prevailed in the Yahapalana days, it was possible because the Opposition Leader, for all intentions and purposes, was virtually a member of the government. The Tamil National Alliance (TNA) supported every budget of the Yahapalana government without proposing one single amendment. It was normally an opposition. Therefore, it is not difficult for the government and the opposition to agree on a set of names. In the context of today, it would be difficult for the Prime Minister and the Opposition Leader to agree on names.

Q: Why is it inappropriate for civil society to play a role in this case?

Secondly, a series of officers cannot be appointed without the approval of the constitutional council. That means the President cannot discharge those functions without recommendations or approval. There is this myth skillfully cultivated in the country that these are dangerous powers to be entrusted to the President; that it will erode separation of powers, freedom of individuals etc. That has been cultivated. Then, there is absolutely no danger in giving these powers to people from civil society. One must rationally examine this premise.

Q: How do you argue against it?

You are empowering the President. The President is elected and accountable to the people of the country. After five years, he has to submit himself to the judgment of people. If the people are not satisfied with his performance, he is defeated. That is the ultimate accountability of the President to the people. What about the people from civil society. From whom have they got the mandate? To whom are they responsible? Where is the accountability?
Today, you have a situation in Sri Lanka where the President, the prime minister and the Cabinet have changed. But, one thing that has not changed is the constitutional council. These members from civil society hold office until October, 2021. More than a year from now, they are in office. People cannot change them. Is that upholding of democracy or negation of democracy? These people are a law unto themselves.

President Gotabaya Rajapaksa was elected with 6.9 million votes. There is no doubt about his mandate. But, how can  he deliver? He cannot hold the defence portfolio. But, he is responsible for maintaining the law and order of the country. How can he deliver if he cannot even dismiss the Inspector General of Police

Q: They argue that the aspiration is good. What is your response?

But, it is obvious that it was not achieved on the ground. Empirical experience of the Yahapalana years demonstrates that beyond any doubt. The objective was to depoliticise all these appointments. Did that really happen in practice? Evidence is very much to the contrary. You have Javid Yusuf. He is above the President. He is expected to be apolitical. Is he objective? He called upon people at a public forum not to give two-thirds majority to an alliance led by SLPP.

He is as much as politicised as anybody else. He is not far removed from politics. Election Commission member Dr.Ratnajeewan Hoole asked people not to vote for the SLPP. Everything they have done so far shows that they have been instruments of the government in power. You have this pretense of impartiality. They say it is dangerous to concentrate too much power in the hands of one individual. Then, what about concentration of power in the hands of people who are not accountable? The problem arises when there is power without accountability. The President is accountable whereas Dr. Hoole is not.

Q: But, you need checks and balances in a democracy. What is your response?

Like everything else in life, there must be a sense of balance. We need checks and balances. We accept that. But, if you have checks and balances to the extent that the person elected cannot move this way or that way, it is negating. It destroys their very purpose. The result is inaction. Checks and balances also have a limit.
If too much power in the hands of one person is bad, what is the right balance? The President could not act without the approval of the constitutional council. Now, the parliamentary council is proposed to be set up. The President has to refer his appointments to the parliamentary council for observations. That is a check on arbitrary or capricious actions.

He must make the appointments after all. It is he who was elected by the people. If he acts unreasonably, the public opinion will build up against him.

Q: There is a whole lot of criticism on the move to do away with the National Audit Commission. Why has it been proposed?

Q: The President is always a member of a particular political party. If he gets the authority to appoint members to the election commission, it will affect independence of the body. How do you counter that argument?

The entire tradition since the Soulbury Commission was that. All these bodies were appointed by the government in power. That was never accepted inappropriate since 1948. It was like that. The election commission has to be appointed independently, you said. What happened when Dr. Hoole made this statement on TV that people should not vote for Pohottuwa? The Secretary of SLPP protested in writing and asked for the response of the chairman of the election commission. There was no response at all. Is that being independent?

The President is elected for five years. He receives a mandate directly from people. He is elected on a particular programme of work- a specific agenda. People of the country endorse that agenda and give him the power to implement it. He has to deliver in keeping with the mandate

Q: Why have you sought to remove the ceiling on the size of the Cabinet?

There was never a ceiling. That was entirely fictitious. That was a public relations exercise. On the face of it, you have 30 Cabinet Ministers and 40 state and deputy ministers. Simply by signing an agreement with another party, you can knock off all those limits. It was sleight of hand.

Q: Does it mean the government will stick to the present number or increase it?

The President will have that power to decide under appropriate circumstances to change numbers this way or that way. It does not mean you must have 30. When the President appointed this Cabinet, the 19th Amendment was in force. But, he did not go up to 30.

He appointed only 28. Actually, the 20th Amendment will preserve the rights of people in a way that did not exist earlier.