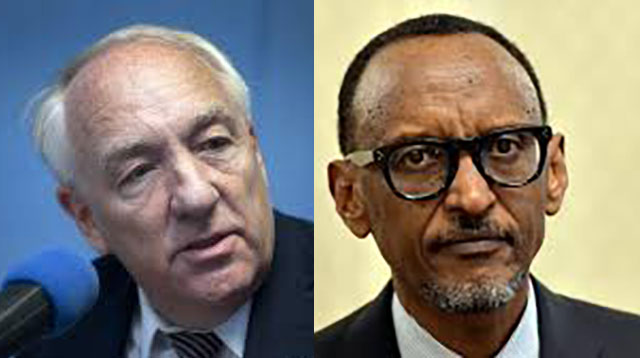 Former Head of the US State Department’s War Crimes and Global Criminal Justice (2009-2015) during the Obama regime, Stephen Rapp, who worked very closely with then-Secretary of State Hilary Clinton on the Sri Lankan issues that emerged since the defeat of the Tamil Tigers in May 2009, participated in a Webinar sponsored by the Global Tamil Forum last week. Rapp said that the then-Defense Secretary Gotabaya Rajapaksa admitted to him killing the surrendered LTTE leaders. Rapp recalled Rajapaksa telling him: “I remember the defense secretary saying, “Oh, trials, trials, you know they go on so long and people get off”. And then he said, “I killed them, I killed them, I killed them,”

My endeavor here is to ‘expose’ Stephen Rapp’s very heavy baggage: His own culpability of covering-up Rwanda’s 1994 genocide as an attempt to whitewash the United States involvement in that episode as the Chief Prosecutor of the United Nations-appointed International Criminal Tribunal of Rwanda (ICTR). Ambassador Rapp had visited Sri Lanka twice, and was pressing Sri Lanka for ‘accountability’ and ‘transparency’ of its operation against the terrorist Tamil Tigers. He is now collaborating with the Global Tamil Forum to tarnish the image of Sri Lanka.

In October 1990, the Ugandan army and the Rwandan Patriotic Front/Army (RPF) led by Major General Paul Kagame (who is now the president of Rwanda) invaded Rwanda. These terrorists who violated international laws and committed massive war crimes were backed by England, Belgium, the United States and Israel, according to many investigators and researchers. By July 1994, the RPF completed its coup d’etat and consolidated its power in Rwanda.

On April 6, 1994, the governments of Rwanda and Burundi were decapitated, when the plane carrying the two presidents and top military staff was shot down over Kigali, Rwanda’s capital. The well-planned assassinations sparked a massive escalation of warfare that is falsely portrayed as the result of meaningless ‘tribal savagery’. These assassinations were major war crimes, and the RPF was largely responsible, but almost every attempt to honestly investigate the double presidential assassinations has been blocked by the U.S. and its allies.

Professor Peter Erlinder, of the William Mitchell College of Law in Pennsylvania, was very much involved in defending some at the ICTR which was functioning in Arusha in Tanzania, has come out with an array of evidence and interpretations of the direct culpability of the current Rwandan president Paul Kagame in the Rwandan genocide. How Kagame and his colleagues were given military training in the US. How Kagame, as the head of the Rwandan Patriotic Front (RPF), a proxy force of the Pentagon according to Erlinder, invaded Rwanda to unleash a genocide with tacit approval of the United States, and in the following years how the United States took covert and overt steps to cover up its involvement in the Rwandan mass massacre.

It is here that Ambassador-at Large Stephen Rapp’s name emerges. Mr. Rapp as the chief prosecutor of the Rwandan genocide, according to Peter Elinder, and many other investigators, was one of the main persons involved in the cover up of US involvement in the Rwandan Genocide. Rapp began his international career at the UN Security Council Criminal Tribunal for Rwanda in 2001, while Carla Del Ponte was Chief Rwanda Prosecutor.

Del Ponte in her memoir – Madam Prosecutor – of her years as Chief UN Prosecutor describes in detail the systematic US-initiated cover-up of crimes by the current Rwandan government, a US ally, committed during the Rwanda Genocide. She was removed from her ICTR (International Criminal Tribunal for Rwanda) position when she refused to cooperate with the US-initiated “cover-up.”

Two years after Del Ponte was removed from office, Stephen Rapp became “Chief” of ICTR Prosecutions with access to all of the evidence known to Ms. Del Ponte. During his four years at the ICTR, Ambassador Rapp did not prosecute a single member of Kagame’s military – It was a total “cover-up”.

Stephen Rapp, chief of the US State Department’s Office of War Crimes Issues – now known as Office of Global Criminal Justice – knows this entire Rwandan episode, the US interests in Paul Kagame, the UN concealment of the 1994 report at the behest of the Clinton administration, the US military assistance to Kagame’s Rwandan Patriotic Front and the entire exercise of the ‘Rwandan cover up’ to conceal US culpability in the Rwandan genocide.

It is this Stephen Rapp, who now makes false allegations against Sri Lanka president Gotabaya Rajapaksa.